Every retailer loses a certain amount each year to theft, fraud, and other types of loss. These can range from fairly innocent crimes -- like the person who eats a few grapes in the grocery store, or someone who doesn't mention that a price is rung up too low -- to shoplifting and other criminal endeavors.

Controlling these types of losses -- collectively known as "shrink" -- is something most retailers put considerable effort into. It's why some stores have security departments, others have cameras, and some employ multiple tools to make sure consumers pay for the goods that go out the door.

Those efforts are apparently paying off, at least a little. Losses from retail shrink dropped to $46.8 billion in 2017, down from $48.9 billion in 2016, according to the annual National Retail Security Survey published by the National Retail Federation (NRF) and the University of Florida (UoF). The survey canvassed "63 loss prevention and asset protection professionals from a variety of retail sectors." 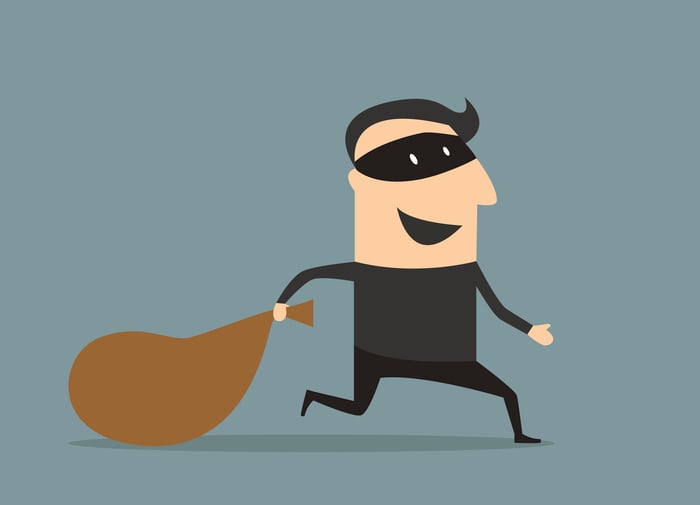 Most criminal are not dressed this obviously. Image source: Getty Images.

The majority of those surveyed (59%) said that they felt shrink was flat or decreasing, compared to 51% who felt that way in the previous report. Still, 41% said they believed shrink was growing, though that number was down from 49% in 2016.

Shoplifting and what NRF called "organized retail crime" topped the list of reasons given for shrink at 36%. That was followed closely by "internal employee theft" (33%), "administrative paperwork errors" (19%), and "vendor fraud or mistake" (6%).

"Retailers are making progress in combating criminal activity, but there are still many challenges," NRF Vice President of Loss Prevention Bob Moraca said in the press release. "Whether the threat is coming from cybersecurity, organized retail crime or employee theft, the job for retail security teams continues to become more difficult every day, especially when resources and staff are limited."

While these numbers are encouraging and show that retailers have made progress, criminals are constantly evolving. Today's retailers no longer have to worry just about shoplifters or thieving employees, they also need to protect against digital crimes.

"Cybersecurity concerns are top-of-mind for retailers today as criminals continue to become more sophisticated in this area," said Richard Hollinger, a University of Florida criminology professor and the lead author of the report. "This is a growing threat that will require more resources going forward. Retail executives need to invest more in loss prevention to reduce these losses to their bottom line."

Shrink isn't just bad for retailers, it hurts shoppers as well. Stores need to make money, and losses from various kinds of theft can lead to higher prices.

As consumers, that means that it's important not to contribute to this problem, even if it's in one of the more innocent ways that shrink occurs. Yes, you just ate a cookie without paying for it -- but imagine what would happens if everyone thought that way?

Be a good customer and consider the needs of the store along with your own. Don't cheat the system, because ultimately that comes back to hurt not just you, but everyone.