If all you did was glance at your portfolio, you might think that Dave & Buster's Entertainment (NASDAQ:PLAY) had bucked the industry trend of declining in-store traffic and somehow found a way to woo more patrons inside with its proprietary games. The stock, after all, was up by 16% at 2:45 p.m. Tuesday following the previous evening's release of the company's first-quarter earnings report.

Unfortunately, that's not the case. While the jump was a welcome respite for a stock that's underperformed the S&P 500 by 50 percentage points over the past year, there are still headwinds that need to be addressed. 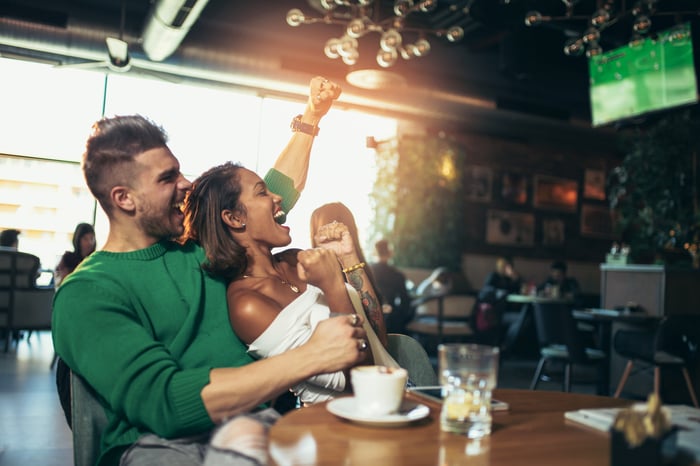 Before we get into the details of Dave & Buster's quarter, let's review how the company performed on the headline numbers.

Overall, these numbers don't look too bad: Revenue is growing -- which is more than many restaurants can say right now -- and while free cash flow might be shrinking, that's largely because Dave & Buster's is working off of a small base of existing stores (112 at the end of the quarter) in building out its presence.

But the gold standard for restaurants is comparable-store sales, or comps. Unlike revenue growth -- which can show an uptick thanks to new locations, but can mask how existing stores are doing -- comps are a closer measure of a company's popularity with consumers.

And the trend has not been pretty lately. For the quarter, comps were down 4.9% -- a continuation of a fairly dramatic reversal of Dave & Buster's trends over recent history. 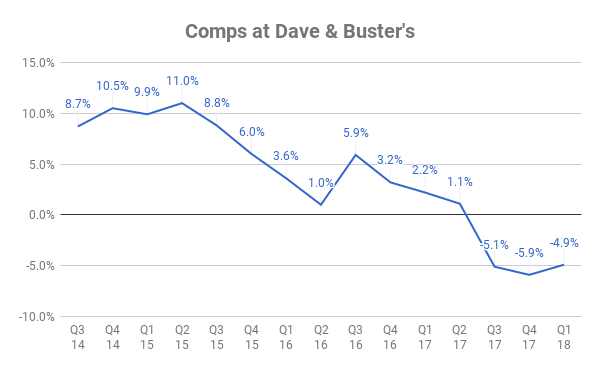 A 4.9% decline is better on an absolute basis than last quarter's 5.9% decline. It's possible that that improvement -- along with the stock's high short interest -- could help explain Dave & Buster's stock gaining so dramatically. But the trends behind the fall in comps are still not encouraging:

The company also said that "competitive intrusion and cannibalization had a slightly more unfavorable impact compared to last year." That's not great news for shareholders, as it means not only that locations may be saturating markets more quickly than expected, but that Dave & Buster's competitive moat may be wearing thin.

Speaking on the conference call, outgoing CEO Steven King acknowledged these struggles while remaining optimistic as he hands the reins off to CFO Brian Jenkins (King will remain chairman of the board):

Comparable-store sales on a calendar basis declined 4.9% versus the year ago period, a slight improvement on the trends in the first quarter, although clearly not where we wanted to be. ...

This is a time of great excitement as we roll out a new virtual reality attraction that is highly differentiated and exclusive to D&B. While games and entertainment will always be the centerpiece of our brand, I'm optimistic about the changes that we're making to our food and beverage offering in order to be more relevant and more convenient to our guests.

Management also called out several of the company's proprietary virtual reality (VR) games -- like Jurassic World VR -- and a revamped menu as cause for optimism.

New CEO Brian Jenkins reaffirmed the company's guidance for the coming year. Comparable-store sales are expected to decline in the low-to-mid single digits. Revenue is expected to come in at a midpoint of $1.22 billion for the year. Taking the first quarter into consideration, this would represent revenue growth of 6% for the rest of the fiscal year. King is retiring and will step down as CEO on Aug. 5, at the end of the second quarter.