Adobe Systems Incorporated (NASDAQ:ADBE) announced strong fiscal second-quarter 2018 results on Thursday after the markets closed, highlighting record performances from its digital-media and cloud-based creative software solutions, as well as an ambitious acquisition in the cloud-commerce space. The creative software leader also offered solid forward guidance and predicted more of the same strength ahead.

Let's take a look at what Adobe accomplished over the past few months. 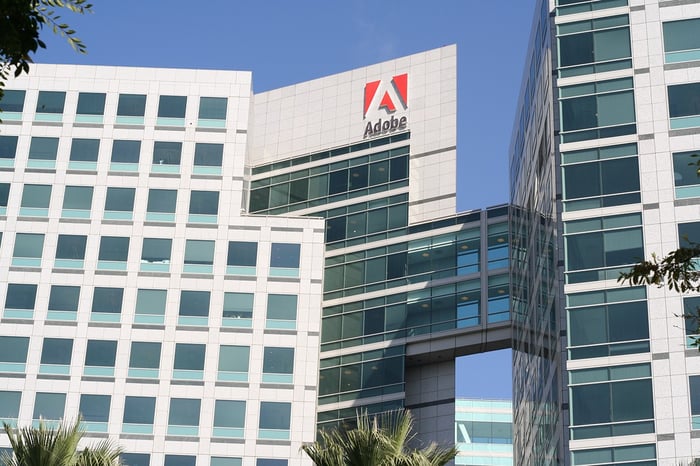 "Adobe delivers all the capabilities to enable transformative digital experiences, including content creation and management, predictive analytics and commerce," stated Adobe CEO Shantanu Narayen. "Our record results in Q2 reflect continued execution against this significant opportunity where Adobe is the clear market leader."

Adobe CFO John Murphy added: "Adobe delivered record revenue with strong earnings and cash flow, and we expect our momentum to continue in the second half of fiscal 2018."

During the subsequent conference call, Narayen elaborated on the impending Magento Commerce acquisition:

Commerce is an integral part of an end-to-end customer experience as consumers and businesses now expect every interaction to be shoppable. [...] The acquisition of Magento will make Adobe the only company with leadership in content creation, marketing, advertising, analytics and now commerce -- enabling real-time personalized experiences across the entire customer journey -- whether on the web, mobile, social, in-product or in-store. We believe the addition of Magento expands our available market opportunity, builds out our product portfolio, and addresses a key underserved customer need.

More specifically, Adobe expects revenue in fiscal Q3 2018 to be roughly $2.24 billion, assuming digital media segment growth of roughly 25% and digital experience growth of approximately 15%. On the bottom line, that should translate to GAAP earnings per share of $1.27 and adjusted earnings of $1.68 per share. Note this doesn't include revenue from the Magento acquisition, which is expected to close next week.

By contrast -- and though we don't usually pay close attention to Wall Street's demands -- consensus estimates predicted lower quarterly adjusted earnings of $1.61 per share on revenue of $2.22 billion.

Simply put, this was another easy quarterly beat for Adobe as creative professionals continue to embrace its new digital and cloud-based subscription model, followed by a better-than-expected outlook and punctuated by a promising acquisition. While it remains to be seen how the market will respond with Adobe stock already trading at all-time highs leading into this report, I think investors should be more than happy with what the company had to say.