Several big pharma companies are about to lose patent exclusivity for blockbuster drugs. Should investors be worried?

Just as big pharma companies were finally getting over the patent cliff from a few years ago, another one is on the way.

Market research firm EvaluatePharma projects that more than $250 billion in sales are at risk between 2018 and 2024 for drugs that will lose patent exclusivity. Four companies could especially feel the sting from these losses: AbbVie (ABBV -0.38%), Celgene (CELG), Johnson & Johnson (JNJ 0.91%), and Novo Nordisk (NVO 1.07%). Should investors beware of these big pharma stocks? 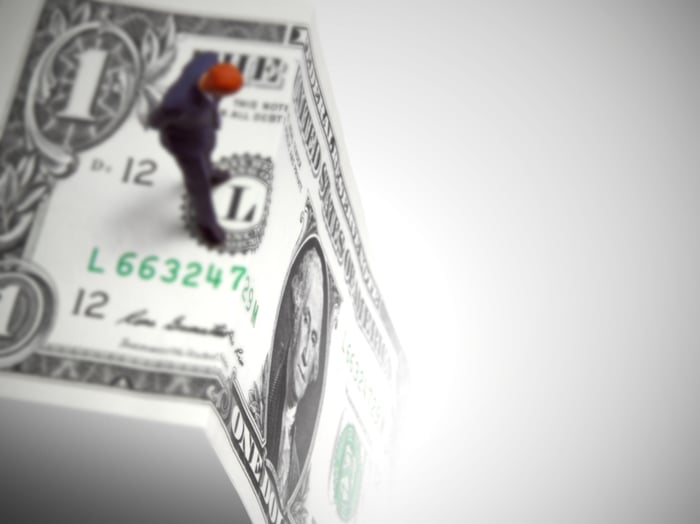 How did EvaluatePharma calculate the potential financial impact of the coming patent cliff? It's simple. The research firm looked at all drugs that have already lost patent exclusivity or are scheduled to do so prior to 2024. EvaluatePharma then estimated the sales for these drugs in the year prior to when they go off-patent and applied that amount to subsequent years. The grand total came to $251 billion.

The biggest drug that faces the loss of patent exclusivity happens to be the best-selling drug in the world right now -- Humira. AbbVie reported sales of $18.4 billion for the autoimmune disease drug last year. Although a key U.S. patent for Humira expired in 2016, AbbVie has other patents that protect the drug through 2022. But beginning in early 2023, Humira will face competition from at least one biosimilar -- Amgen's Amjevita. AbbVie faces biosimilar competition later this year in Europe.

Celgene claimed the No. 2 top-selling drug of 2017 with Revlimid, which generated sales of $8.2 billion. A key European patent for the blood cancer drug will expire in 2022. And while Celgene's U.S. patents for the drug extend through 2026, the company brokered a deal with Natco Pharma that allows a generic version of Revlimid to be sold in the U.S. in limited volumes beginning in March 2022.

The big pharma company with the most sales at risk due to patent expirations is Novo Nordisk. Several of Novo's top diabetes products, including NovoLog/NovoRapid and NovoLog Mix/NovoMix, lost patent exclusivity over the last few years. Key patents for Levemir in the U.S. and Europe expire in 2019. Total 2017 sales for Novo Nordisk's drugs that have or will lose patent exclusivity exceeded $9 billion.

How scary is the impending patent cliff? It's not as bad as you might think.

Humira, for example, is still expected to be the world's No. 1 drug in 2024, with sales of more than $15.2 billion. EvaluatePharma thinks that Revlimid will slip a spot from No. 2 to No. 3, but will still grow robustly and generate revenue of close to $8.2 billion annually seven years from now.

Johnson & Johnson has demonstrated the ability to hold on to most of the revenue for Remicade despite losing patent exclusivity. However, J&J's tactics have been controversial and spurred Pfizer to sue for alleged violation of antitrust laws.

EvaluatePharma's report noted that many analysts aren't too concerned about Novo Nordisk's patent cliff. The firm stated that sales expectations for Novo's drugs that have or will lose patent protection continue to remain relatively high, probably because of "the historical sales erosion seen for injected diabetes therapy."

In my view, two of these stocks will enjoy strong growth over the next few years. Both AbbVie and Celgene have great pipelines and other solid blockbuster drugs. Both should also see sustained momentum for their top-selling products.

What about the other two stocks? Johnson & Johnson is so big that it can absorb the impact of losses of patent exclusivity. Novo Nordisk has new drugs, especially Ozempic, that should help it perform well.

Remember the old cartoons where Road Runner ran off a cliff and defied gravity? Poor Wile E. Coyote followed behind but plummeted to the bottom of the canyon. I think that potentially all of these big pharma stocks could be more like Road Runner than Wile E. Coyote. They'll go off the patent cliff, but they won't be hurt -- at least not too much.