Even before Disney (NYSE:DIS) released the latest installment in its Marvel canon, Avengers: Infinity War was destined to be a hit. The superhero mashup movie had two sizable advantages going into its record run. First, it rode on the coattails of the recent success of Black Panther, a box office monster that placed fifth for opening weekend ticket sales and broke into the top 10 for all-time worldwide box office. Second was the popularity of the two previous Avengers movies -- which both premiered to record-breaking opening weekends before finishing their runs on the top 10 list.

Avengers: Infinity War got off to a historic start, breaking the records for both domestic and worldwide opening weekends, generating nearly $258 million in North American ticket sales, and $640 million worldwide. Disney announced that the superhero team-up flick had joined the likes of Avatar, Titanic, and Star Wars: The Force Awakens, becoming only the fourth movie in history to generate more than $2 billion in global ticket sales. 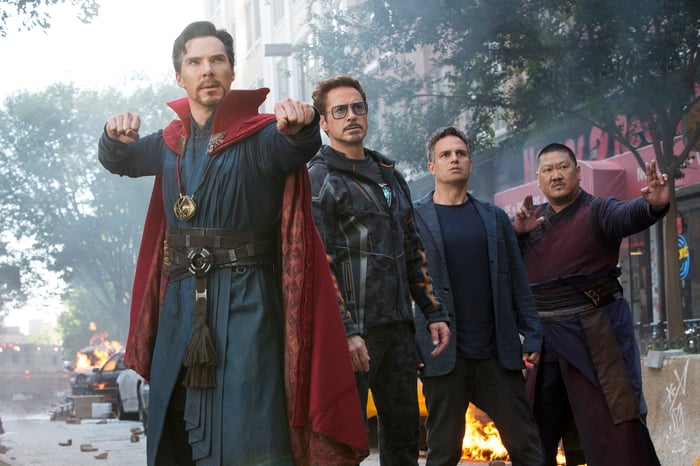 On a record run

Disney confirmed that Avengers: Infinity War had passed the milestone on its 48th day of release. On the domestic front, the movie "stands as the fifth highest-grossing film of all time with $656.1 million," according the company's press release. Internationally, the picture is the "third highest-grossing release ever with $1.346 billion."

It's also important to note that the film is still in its theatrical run and was recently given a 30-day extension in China, a somewhat rare occurrence for a Western movie.

It's been a remarkable year thus far for Marvel, with Black Panther and Avengers: Infinity War alone generating more than $3.3 billion in ticket sales. Disney also broke the record for the fastest sprint to $1 billion in box office, achieving that distinction on April 27. There's still one more entry for Marvel this year, with Ant-Man and the Wasp set to debut in early July.

This year adds to Marvel's impressive run, racking up nearly $17 billion in box office sales since the release of Iron Man a decade ago.

Disney has been running the tables over the past several years, breaking records in the process. The House of Mouse is the only studio ever to top $5 billion in box office sales for three successive years, the first -- and only -- moviemaker to crest $6 billion in ticket sales twice, and the first studio ever to bring in $7 billion in global box office sales -- a benchmark the company is on track to surpass in 2018.

As my colleague Daniel Sparks pointed out, investors are likely underestimating the value of Disney's studio business, and its parks and resorts business as well. Many investors are focused almost exclusively on the media segment, which is facing secular declines thanks to cord-cutting and the growing popularity of streaming. As you can see from the above chart, the importance of the media business has begun a slow decline in recent years, as the relevance of Disney's other segments has continued to grow. The media business -- which accounted for 70% of the company's operating income in 2011 -- had fallen to only 47% by 2017. At the same time, the studio's contribution has more than doubled to 16% of operating income, while the parks and resorts segment has grown from 18% to 25%. These trends will likely continue in the coming years, eventually making the media segment much less relevant.

Disney also has two new over-the-top services that will be adding to its coffers. The ESPN+ streaming app recently debuted as a companion to its cable television counterpart. The Disney-branded streaming service, which will feature programming from the company's Pixar, Lucasfilm, Marvel, and Disney studios will launch late next year. These new services will provide the company with new and growing revenue streams going forward.

Though the stock has been stuck in neutral during the past three years, I remain confident that five years from now, Disney investors will have been amply rewarded for their patience, and the company will have moved on to greater heights.