Shares of iRobot (NASDAQ:IRBT) have climbed more than 30% since the consumer robotics specialist announced first-quarter results in late April -- and with good reason. Both total revenue (up nearly 29%) and adjusted earnings per share (up 27%) comfortably exceeded expectations, driven by broad-based geographic strength and global demand for its core Roomba robotic vacuum cleaners (RVCs). As it stands, Roomba still generates the vast majority of iRobot's sales.

iRobot subsequently revealed that -- despite a growing number of competitors in the niche -- the Roomba line still commands a whopping 62% global  market share of the RVC segment. And even then, iRobot insists that with household penetration of RVCs still low relative to their upright vacuum counterparts, its current installed base of 13 million households has room to grow nearly tenfold over the long term in the United States alone. 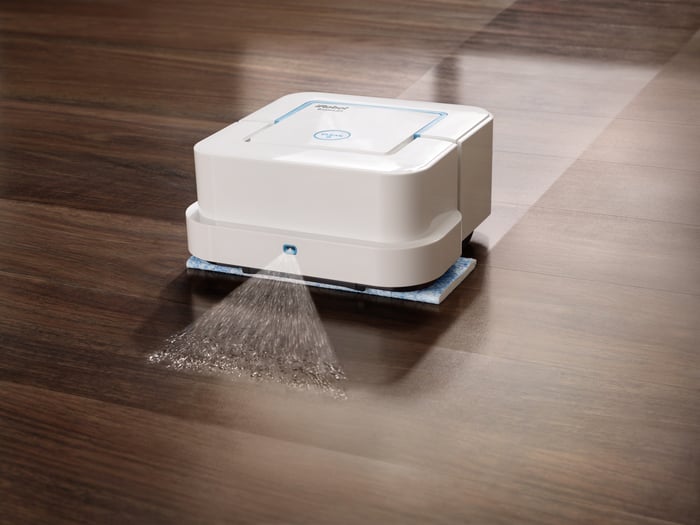 But Roomba isn't iRobot's only product with long-term promise. According to management during a recent investor conference, the company's Braava line of floor-mopping robots should be the next to deliver massive incremental growth.

To be fair, Braava is already doing just that. Braava revenue climbed 65% in 2017 -- albeit from a relatively small base -- thanks primarily to the introduction of iRobot's first-ever national TV advertising campaign featuring the line in the United States.

And keeping in mind Braava revenue went on to climb 35% year over year in the first quarter of 2018 (even as iRobot lapped last year's strong first quarter), the company anticipates Braava to continue increasing sales at a rate faster than overall company growth in the coming year.

If the below chart is any indication, there should be much more to come as Braava enters the so-called "explosion stage," where Roomba currently resides.

We can expect international sales to play a significant role to that end. Though markets outside the U.S. have been historically fragmented as iRobot relied primarily on distributors, the company should be able to maintain much tighter control of its marketing, customer service, and sales efforts overseas after its acquisition of its exclusive distributor in Japan in late 2016, followed by the purchase of its largest distributor in Europe last summer.

Where we have made advertising investments, as we did last year in the U.S., demand has been very strong. Therefore, additional advertising investment in Braava, under our direction, is critical. Lack of awareness and articulation of the product's value propositions are the hurdles we must overcome to drive this growth.

As for Braava's value proposition, keep in mind it's a much less expensive bot than Roomba. The Braava jet 240 model, for example, comes with an MSRP of just $169.99, which could make it an attractive option for the fast-growing middle class in any number of emerging markets. And that's not to mention the prospect of recurring revenue as Braava builds its base; iRobot also sells disposable mopping pads and floor cleaner for the mopping bots.

So while Roomba rightly enjoys the spotlight for now, investors should watch closely for Braava to take center stage in the coming years. If all goes as planned, I suspect iRobot stock's recent gains will be only the beginning.