Software giant Microsoft (NASDAQ:MSFT) has been loosely in the news industry for decades, starting with MSN but also with MSNBC, a joint venture with NBC. The software giant sold its stake in MSNBC back in 2012 for an estimated $300 million, but still maintains and operates MSN. There's also a news section for Bing, Microsoft's search engine. But the news industry has transformed quite a bit over the years, particularly in the concurrent eras of mobile computing and fake news.

The company has just announced Microsoft News, a revamped news platform that will span mobile devices as well as traditional desktop sites. 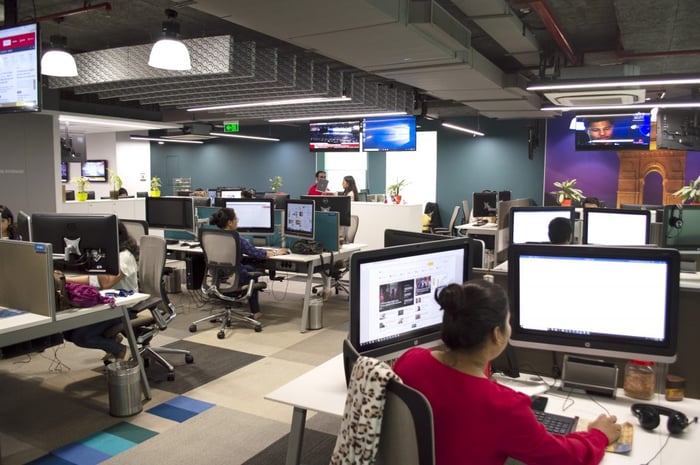 Microsoft had originally released an iOS news app back in 2016, but the company is now releasing a redesigned version of it. If that general order of events sounds vaguely familiar, that could be because Alphabet (NASDAQ:GOOG) (NASDAQ:GOOGL) subsidiary Google just similarly launched a redesigned version of its own Google News mobile app last month, one that leverages artificial intelligence (AI) to a much greater degree in order to curate, personalize, and vet news.

Under the hood, Microsoft News is also what the company is calling the back-end news engine that will power the mobile apps as well as MSN.com, the News app for Windows 10, and other apps and services that deliver news in other ways. Microsoft will be utilizing a combination of AI, human editors, and publishing partnerships, the same way it's always curated news content. (The Motley Fool has a publishing partnership with MSN.)

This all comes as Apple (NASDAQ:AAPL) is preparing to take Apple News to the next level in iOS 12, incorporating the service across other apps and services while redesigning the interface and bringing it to the Mac. Apple is taking news curation and distribution very seriously, presumably ahead of its rumored launch of a premium news subscription.

To automate, or to not automate, that is the question

Each tech company is taking a different approach regarding the level of AI and automation being incorporated into their respective offerings. Apple and Microsoft use teams of human editors in conjunction with AI in an effort to have safeguards against algorithmically distributed misinformation. It's not clear how large Apple's team is, but Microsoft says it has over 800 editors all over the world.

That's in stark contrast to Google News, which will not use human editors at all, nor will Google News have partnerships with publishers. That's potentially dangerous, and it clearly worked out horrendously for Facebook (NASDAQ:FB). Facebook faced controversy in 2016 over allegations that its human editors for the Trending section suppressed conservative views. Within just a couple months, Facebook fired all of its human editors (who were third-party contractors instead of full-time employees) in favor of the almighty algorithm. We all know what happened next: Fake news immediately started to spread like wildfire on the service, and the rest is scandalous history.

Google's decision to use solely AI to curate and distribute news is especially strange considering the fact that YouTube has also been criticized for enabling the distribution of misinformation. Ironically, Google's response there has been to increase the level of human oversight on the popular video-sharing platform.

It doesn't seem as if Microsoft is trying to put together a subscription-based service like Apple is, but it also already has a much more mature news operation already in place. Now the company wants to help make a difference. Microsoft and Apple are taking a stronger stance in the fight against fake news, with the former having the most experience in the news business. Hopefully, the software giant can make a difference.