There are massive tailwinds with the potential to increase the prices of U.S. bank stocks. Higher interest rates are the main driving force benefiting banks because net interest margins, or the difference between the cost for a bank to borrow money and what it can charge for lending it, increases with higher rates -- thus boosting profits. Add to this the double-barreled benefit of lower corporate taxes and less stringent banking regulations, and bank stocks should outperform the broader market.

It must be said, however, that some banks will not enjoy these tailwinds. There are some that can't seem to get out of their own way in doing business. One such bank is Wells Fargo & Company (NYSE:WFC). By now, most investors know that Wells Fargo is dealing with several widely known legal problems. The bank admitted to fraudulently opening millions of bank and credit card accounts, which cost it $185 million in fines and another $142 million for settling class action suits. A separate claim for mortgage- and auto-loan violations resulted in a $1 billion fine from the Consumer Financial Protection Bureau -- the largest fine ever assessed to a U.S. bank.

For a bank the size of Wells Fargo, $1.3 billion in legal expenses isn't going to cause anything more than short-term pain. But investors still have good reason to be concerned. Aside from the massive fines, the bank has tarnished its reputation -- and that's not the worst of it.

In an unprecedented action, the Federal Reserve has prohibited the bank from increasing its asset base beyond the level the bank had at the end of 2017. In other words, the Federal Reserve capped Wells Fargo assets at $1.95 trillion until the Fed is satisfied that Wells' problems are in the past. Given the bank's inability to grow its assets, the only driver of value over the next couple of years is higher interest rates on loans, lower corporate taxes, and the benefits of ongoing cost-cutting initiatives -- like the shuttering of nearly 900 branches by the end of 2020.

But the bank faces an uphill battle here. These actions don't provide the firepower to impact profits materially, especially considering that higher legal expenses will offset some of the savings from shuttering branches. Meanwhile, major competitors like Bank of America (NYSE:BAC) and JP Morgan (NYSE:JPM) are on cruise control.

In an effort to stay abreast of its competitors without hitting its asset cap, Wells Fargo wants to grow its auto-lending business -- a potentially more profitable form of lending. Interestingly, the bank reduced auto lending two years ago due to the age of the current credit cycle. This decision reeks of desperation.

In 2017, auto loan charge-offs accounted for about a quarter of the bank's total charge-offs. Yet these same loans made up less than 6% of the bank's loan volume. That makes it difficult to see how accelerating this line of business, especially this late in the credit cycle, makes any sense.

But that's not the only concern for Wells Fargo investors. Another worry is the lack of a steepening yield curve. A yield curve measures the difference between short and long-term Treasury rates. Historically, an expanding economy brings an upward sloping curve because investors demand higher yields on long bonds to compensate them for duration and inflation risk.  But, the curve has been flattening since 2014 -- as you can see in the St. Louis Fed's chart here.  And at 35 basis points, the yield curve is the flattest since before the financial crisis.

You may ask why this is important.  Since the 1960s, a flattening curve is the of the best indicators of an economic recession. It signals that short-term interest rates could head lower.  Of course, if short-term rates were to decline from current levels, it would mean the Federal Reserve is slashing rates to avoid or mitigate a recession.  Thus, a flattening yield curve doesn't bode well for the economy in general, and for bank stocks specifically.  Any recession would narrow the net interest margins for banks, significantly hurting their profits.  And given that stock prices are a function of a company's profits, financial stocks would likely fall as a result of lower margins.

This means that investors can forget the idea that a steepening yield curve driving future Wells Fargo profits. It just isn't happening, which begs the question, why are net interest margins rising?  The Bank of England answered this question in a research paper showing long-term interest rates play a bigger role in driving net interest margin than the slope of the yield curve. The slowly rising yield on the 30-year Treasury since roughly mid-2016 supports this idea.

Remember, though, the yield curve indicates that long-rates are stubbornly refusing to rise with shorter rates.  This fact, more than anything else, means Wells Fargo's need for a steepening yield curve can't materialize for now.  This leaves the company relatively limited until the Federal Reserve gives the company the green light to grow its assets.

As you can see from the chart below, WFC trades at a price-to-book ratio of 1.5.  The P/B metric compares a stock's price to tangible assets on its balance sheet, and is one of the best valuation metrics for bank stocks. 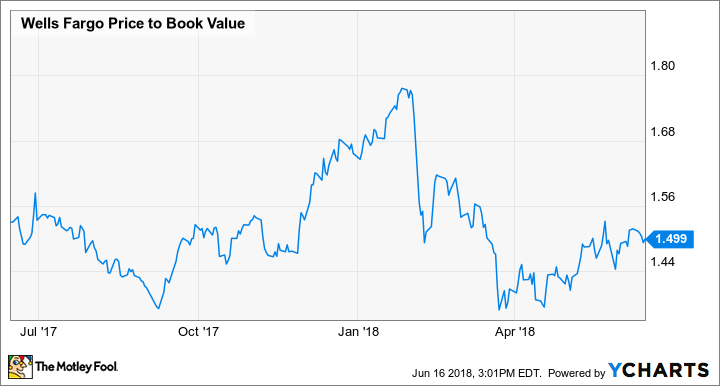 Unfortunately, the stock is trading at a 12.8% premium to the banking industry average P/B ratio of 1.33.  In other words, Wells Fargo is valued higher than many of its peers who don't have the same low growth prospects and regulatory constraints. What this means is that even if Wells Fargo does everything perfectly, the stock doesn't have much upside potential until the asset cap is lifted. And you'd be hard-pressed to convince anyone that Wells Fargo can do anything perfectly right now.