First Solar (NASDAQ:FSLR) has embarked on an aggressive expansion plan, hoping to take better advantage of its position as the biggest supplier of tariff-free solar panels in the U.S. market.

The company had already been doing whatever it could to maximize its output, from reopening old production lines to delaying some plant upgrades. But its strategy thus far has relied on getting more out of its existing facilities. Recently, the company decided to build an entirely new plant in Lake Township, Ohio, at an estimated cost of about $400 million. Boosting its capacity in this way may appear sensible at first glance given First Solar's improving financials, but the payoff may not be a slam dunk. 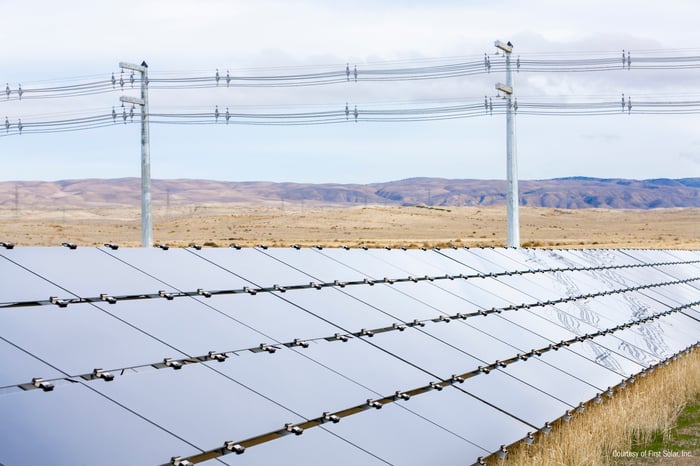 First Solar is in a strong position today because it's thin-film solar panel technology is exempt from the 30% import tariff President Trump imposed this year on most solar panels manufactured outside the U.S. That's led to strong gross margins on bookings, projected at over 20% by management, and fueled investors' hopes for earnings growth long-term. But solar manufacturing plants don't have a history of generating big profits, and each expansion First Solar embarks on faces the prospect of diminishing returns.

One thing to consider is that the U.S. market may be oversupplied with tariff-free panels by the time the Ohio plant is fully operational in 2020. That alone will be a challenge, but today, I want to discuss how the natural decline in solar panel pricing could make the economics of the new plant difficult to justify.

Management has forecast the Ohio facility will cost $400 million to build, and will be operational at the end of 2019 with 1,200 megawatts (MW) of capacity. In the fourth quarter of 2017, when the 20%+ gross margin projection was made, GTM Research estimates that solar panel prices were about $0.48 per watt in the U.S., which could bring annual gross margin from the plant's production to $115.2 million. But a lot has happened since then and that margin may not last for long.

China cut its solar subsidies, which Roth Capital estimates will leave the world oversupplied of solar panels by 34 gigawatts (GW) by the end of this year. To see what happens when the world is oversupplied with solar panels all we have to do is look back to the first quarter of 2017 when GTM Research says panel prices were $0.38 per watt.

If First Solar's gross margins are 20% with prices at $0.48 per watt panel, they would be about 0% with a $0.38 per watt panel if costs remain flat . Even if margins fell into the single digits, returns could be so low it would make it hard to generate a positive return on the $400 million spent to expand production.

To give an idea of how quickly falling prices could impact First Solar, the company has 10,600 MW of contracted backlog, but the new plant is all incremental growth to supply and the company still has about 12,000 megawatts (MW) of panels to sell before protective U.S. tariffs expire in early 2022. If the overall solar market pushes prices lower, First Solar's expansion could be poorly timed to come online just as it's facing margin pressure.

Competition is coming for First Solar

The reason I'm worried about adding capacity like this is that the comfortable, high-margin position First Solar enjoys today may not last. The solar tariffs are set to shrink every year until they expire in February 2022, so it's possible pricing pressure on the company will be more intense in the final three years of the outlook provided above. Manufacturers like JinkoSolar and SunPower are also expanding their U.S. solar panel production, which will diminish First Solar's quasi-monopoly on tariff-free supply.

Beyond that, there are technological headwinds for investors to consider. First Solar recently said that its  Series 6 panel will have performance rating of about 17% efficiency in turning sunlight into electricity this year, and based on a recent technology roadmap, it could hit 18% efficiency in the next few years. But competitors are already beating that performance. The only reason they're not taking more sales away from First Solar is the advantage conferred on the company by the tariffs.

SunPower, for example, is already producing its low-cost P-Series solar panel with a 19% efficiency rating, and it has "a road map to 20% in the near future." Canadian Solar -- despite the name,  a low-cost Chinese supplier -- has already rolled out technology called mono-PERC that will produce solar panels with efficiency in the 19% to 20% range by 2020.

First Solar will be bringing new manufacturing capacity online at a time when the boost it's getting from tariffs will be fading, and into a market where its products may offer worse performance than those of its competitors. First Solar's risk isn't financial ruin given its $2 billion of cash on the balance sheet, but I think investors may be over pricing the stock. The company is the most valuable U.S. traded solar manufacturer with a market cap of $7 billion and investors are expecting strong profitability as manufacturing grows. If the reality is shrinking margins and a low return on investment in new capacity as tariffs subside, the profit investors are expecting may be disappointing and the stock could pull back as a result.

Why First Solar's U.S. Expansion Plans May Not Pay Off @themotleyfool #stocks $FSLR Next Article
Current