It's no secret that both NVIDIA (NASDAQ:NVDA) and Advanced Micro Devices (NASDAQ:AMD), the only two makers of high-performance graphics processors, have seen their respective graphics processor businesses soar thanks to the boom in cryptocurrencies.

In a nutshell, as cryptocurrencies like Ethereum and ZCash, which have generally been produced by running computations on graphics processors, have grown in value, so too has demand for the graphics processors that can produce them. That production process is known as mining. 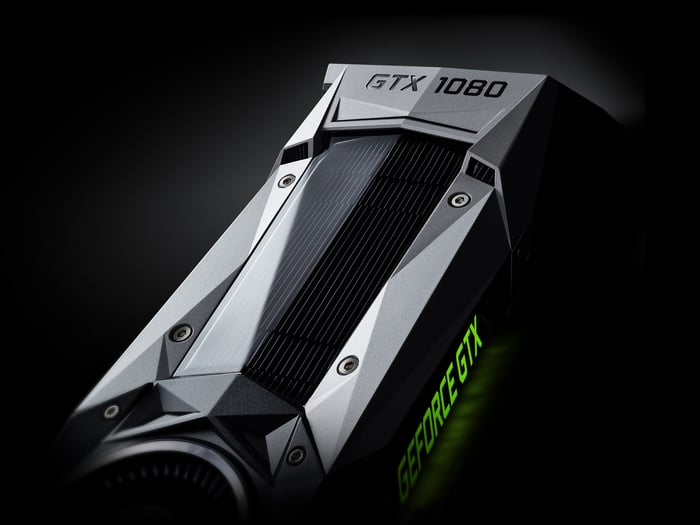 According to a research note from BlueFin Research Partners, NVIDIA-based graphics card sales in North America during the second quarter of 2018 are tracking at "less than 50%" of the levels seen in the first quarter. For AMD, the situation looks even worse, with that figure reportedly coming in at just 35% to 40% of first-quarter levels.

I suspect that the AMD number looking weaker than the NVIDIA number in this case is likely due to the fact that AMD's graphics processors tended to be more capable for certain types of cryptocurrency mining than NVIDIA's. That may have meant a bigger percentage of AMD's total graphics processor shipments went to cryptocurrency miners than NVIDIA's.

Although both NVIDIA and AMD seem to be set to suffer from this trend, there's one additional AMD-specific risk that investors should keep an eye on.

However, because the chip die size of AMD's Vega 56/64 processors is much larger than that of the GeForce GTX 1070 Ti/1080 and because the Vega cards use much more expensive HBM2 memory, I believe NVIDIA's cost structure on its products is substantially better than the competing parts from AMD, potentially giving NVIDIA some flexibility to reduce pricing to levels that AMD might be unable to afford to match. On top of that, NVIDIA's brand, at least subjectively, seems much stronger with the gaming community than AMD's Radeon graphics brand.

So, if demand for graphics cards comes down significantly industrywide (which is what appears to be happening), it wouldn't surprise me to see NVIDIA become more aggressive in trying to capture share within the gaming community to try to soften the blow from cryptocurrency mining demand falloff. That can be done through more aggressive pricing or a ramp-up in marketing spend. And I think NVIDIA's chances of being able to pull that off are pretty good.

Moreover, while NVIDIA's current graphics processor lineup, particularly at the high-end, is arguably stronger than AMD's, it's also worth keeping in mind that NVIDIA is reportedly preparing to launch the first of its next-generation graphics processors, rumored to be called Turing, later this year. The launch timing for this product isn't clear, but some rumors peg the roll out of the first Turing parts as early as the end of July, although some others point to a launch late in the third quarter -- or, in other words, September.

It's also worth pointing out that although AMD had indicated back at its 2017 financial analyst day that it would be rolling out an enhanced version of its current Vega architecture on a so-called "14nm+ manufacturing technology, its more recent product roadmaps don't include that product, implying that it was cancelled. This seems to suggest that AMD won't be able to respond to NVIDIA's new Turing products with new products of its own this year. AMD may ultimately need to resort to price cuts to its current Vega parts to continue to have salable parts in the gaming market, pressuring both revenue and profitability.

Finally, while AMD should roll out its new Navi architecture products in 2019, it's worth keeping in mind that the Navi products will be manufactured using a 7-nanometer technology. AMD and NVIDIA, at least in recent years, have tended to transition to new manufacturing technologies at roughly the same time, so I suspect that by the time AMD rolls out Navi, NVIDIA will also be ready to launch post-Turing parts built using 7-nanometer as well.