lululemon athletica's (NASDAQ:LULU) first-quarter revenue growth of 25% was the fastest rate since the fourth quarter of 2012.

One reason for the improvement is that men are starting to warm up to the brand. In recent years, management has made attracting more male shoppers a priority as the company aims to expand its market opportunity. Men made up 30% of new customers during the first quarter, which tracked above the number of new women customers. Historically, Lululemon has primarily been perceived as a women's brand, but with men joining the gang, the brand is really starting to come into its own. 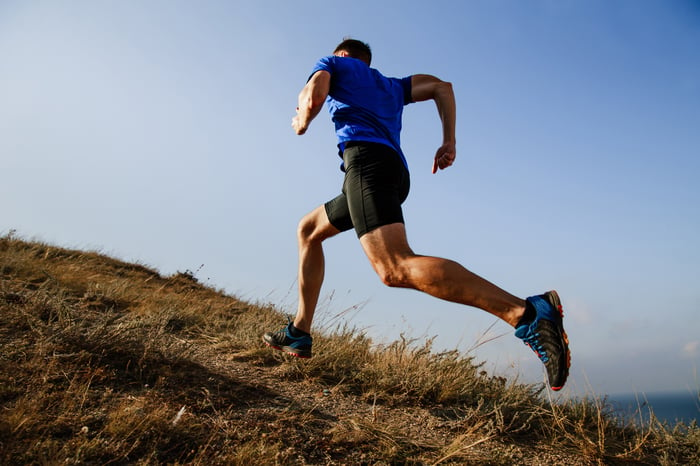 Growth in men's provides a lift

The gains with men come as year-over-year revenue growth accelerated from 18% in the busy holiday quarter to 25% in Q1. Both men's and women's categories saw double-digit increases in comparable-store sales in the most recent quarter. Over the last year, Lululemon has seen its revenue growth accelerate in each quarter, following a weak Q1 2017 earnings report in which Lululemon reported only 5% growth in revenue.

The men's category started to pick up steam in 2015 when the company launched the popular ABC pants. Since then, Lululemon has expanded with different colors and styles, and more men have continued to flock to the brand as a result.

When Lululemon reported a 21% increase in new male customers during the third quarter last year, it was a sign momentum was really building for the yoga apparel specialist. The growth in men's got a big boost following the company's first marketing campaign that targeted men during the fall.

A few years ago, management set a goal to reach $4 billion in total revenue by 2020, which involved growing the men's category to a $1 billion business. On the first-quarter conference call with investors, COO Stuart Haselden said, "We're very excited at the progress we're making against those 2020 goals that we had laid out." Specifically, regarding their plans growing the men's category, Haselden said the company is "running ahead of schedule."

The strong demand for ABC pants is dictating the types of products management is investing in, as Haselden explained:

We're being pulled into these categories versus pushing our way into them if you will. ... This has been a part of our assortments, both in men's and women's, for quite some time. ... Our guests are asking for these types of products.

In February, Lululemon launched specially designed jackets, bottoms, and tops for men in collaboration with Canadian brand Roden Gray, with several items selling out quickly. Lululemon is planning to launch a new style collection focusing on the office commute for men this year. All of this stems from the popularity of the ABC pants, which has convinced men to try other products.

Executive Chairman Glenn Murphy explained that the success the company is seeing with the expansion of the men's category is "starting to open up our thought process on what could this brand become internationally."

Lululemon is on track to reach its $1 billion international revenue goal by 2020, and here, too, men are playing a key role. The success of menswear in Asia -- its fastest-growing market -- is running higher than the company average. In the first quarter, comparable-store sales growth in Asia was 50%, which is on trend with recent quarters.

The pattern is clear: The more men that join the Lululemon fold, the greater the market Lululemon has to expand into and the higher growth it experiences because of it.

Lululemon has had no trouble growing from a small yoga apparel retailer with about $100 million in revenue more than 10 years ago to $2.649 billion last year, as it primarily marketed its brand to women. For the first time, the brand is courting men aggressively at the same time it's seeing high growth rates in international markets.

It's getting more clear Lululemon is a big-time athletic brand in the making.