Financial technology company Square (NYSE:SQ) has garnered lots of love from investors recently. Shares have surged about 160% in the past 12 months and are up 81% year to date. These returns have obviously crushed the market. The S&P 500 is up just 12% over the past 12 months.

Some of the bullishness toward Square stock during this period has to do with the company's excellent execution with its consumer-facing financial products -- namely its Cash App, its accompanying debit card, and other services that complement its Cash App ecosystem. But Square's success with its Cash App hasn't gone unnoticed by competitors. That's why PayPal (NASDAQ:PYPL) announced its own debit card for its very successful peer-to-peer app, Venmo, this week. 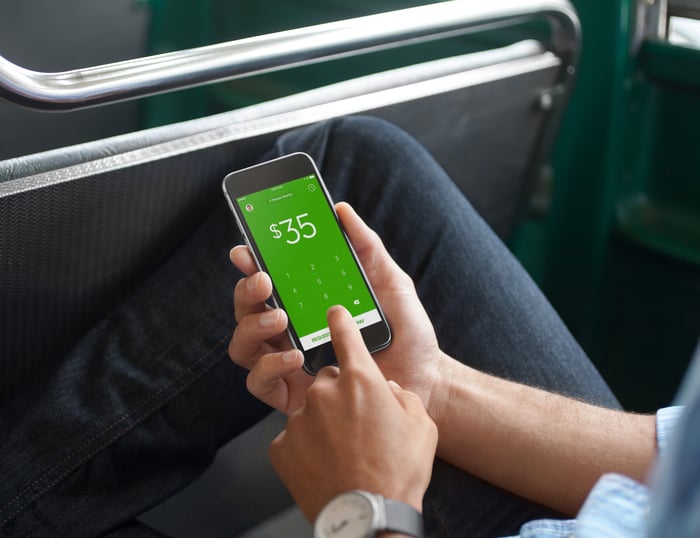 PayPal's new Venmo card, which comes more than a year after Square launched its Square Cash card, adds to a growing list of ways Venmo users can put their funds to work. Until now, Venmo was primarily used to make peer-to-peer payments and make purchases online and in stores where Venmo is accepted. But PayPal's just-announced Venmo card means users can spend money anywhere Mastercard is accepted in the U.S. without having to transfer funds to a bank account first.

The Venmo card significantly boosts the versatility of the Venmo user experience. Even without a Venmo balance, the card will tap into funds from users' linked funding sources. In addition, the Venmo card allows users to withdraw funds at ATMs.

Venmo is initially rolling out the card as part of a limited release. Venmo users can get in line for the beta release by signing up within the app, the company said.

Venmo's debit card is launching to a very active and fast-growing base of users. Person-to-person volume on Venmo increased 50% year over year in the company's most recent quarter, rising to $30 billion. Total payment volume for Venmo increased 80% during the same period, reaching $12 billion.

Square's Cash App is crushing it, too

While Square doesn't disclose its total payment volume for its Cash App and its debit card, you can bet Square has PayPal's attention. Recently, Square's Cash App has consistently ranked first in the iOS App Store. Further, Square said in its most recent earnings call that its Cash Card was already "becoming a more meaningful contributor to subscription and services-based revenue as consumers benefit from the utility of paying both online and offline." PayPal's Venmo card was arguably necessary to ensure the service competes effectively with Square's Cash App card.

Like Venmo, it's clear the Cash App ecosystem is growing extraordinarily fast. The service reached seven million monthly active users last December, the company said. Though Venmo is widely considered a leader in the peer-to-peer payment category, Square's Cash App is undoubtedly a force to be reckoned with.

PayPal and Square's debit cards for their peer-to-peer consumer platforms represent both companies' ongoing efforts to expand their consumer-facing ecosystems -- initiatives that help keep customers coming back. For now, there seems to be no shortage of growth opportunities for both Square and PayPal's consumer-facing services. But as both services grow in size, their execution and pace of innovation could become increasingly important, ultimately making the difference between which one comes out on top over the long haul.