While it may be a while before consumers adopt electric vehicles in huge numbers, the trucking industry is very interested in the technology's potential to cut fuel costs while greatly reducing emissions. It's a market that Tesla (NASDAQ:TSLA) has been hoping to enter -- but as of right now, it looks like Freightliner is ahead of the Silicon Valley upstart's big-truck effort. 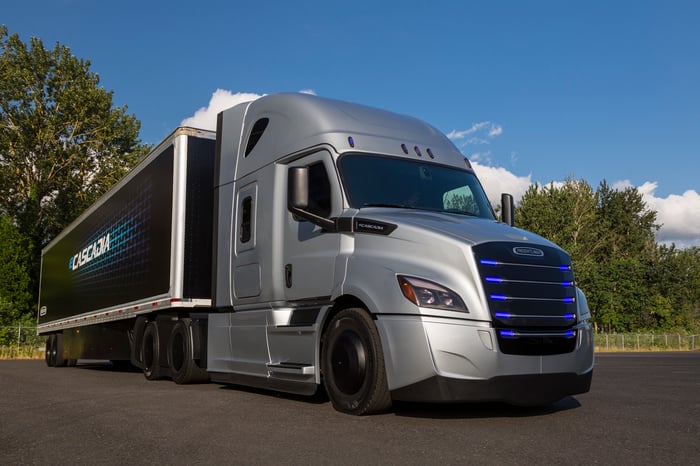 The Freightliner eCascadia is a battery-electric tractor-trailer with 250 miles of range. It will go into production in 2021. Image source: Daimler AG.

What Daimler said: Its pilot program begins later in 2018

Daimler said that two companies that operate fleets of big trucks have signed up to participate in the pilot program for the two new electric trucks being developed by its Freightliner brand:

Daimler said that it will supply Penske and NFI with a test fleet of 30 prototype electric trucks before the end of the year. The two companies will evaluate the new Freightliners, working closely with Freightliner engineers to provide detailed feedback to help the company refine the trucks' designs.

What are these electric Freightliners?

Freightliner has two electric trucks in development now. The first, called the eCascadia, is a full-blown Class 8 ("tractor trailer") heavy truck. It has a 550 kilowatt-hour (kWh) battery, good enough for a range of about 250 miles with a fully loaded trailer. That battery pack has some fast-charging capability: It can be recharged to 80% capacity (or about 220 miles of range) in less than 90 minutes.

The second electric Freightliner, the eM2 106, is what the industry calls a "last mile" truck -- intended for local-level distribution and deliveries. It has a 325-kWh battery pack, giving it a range of about 230 miles when loaded. That battery pack can be recharged to 80% (about 184 miles of range) in less than 60 minutes. 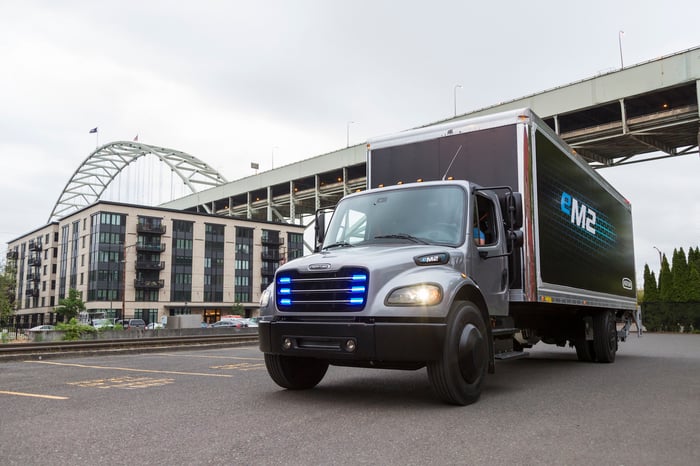 Daimler expects to begin mass-producing both trucks in 2021, incorporating the lessons learned in this pilot program with Penske and NFI.

What about Tesla's Semi?

As with just about everything involving Tesla, there has been a lot of attention and investor interest around its Semi. The Tesla Semi is a battery-electric Class 8 (tractor-trailer) truck that features the automaker's distinctive edgy styling. Tesla has said that the Semi will be offered with 300-mile and 500-mile battery packs when it comes to market... eventually.

Tesla has received some small early orders (and deposits, of course) for the Semi from major truck operators looking to kick the new truck's tires. Again, like everything else having to do with Tesla, expectations for the Semi and estimates of its market potential are huge. 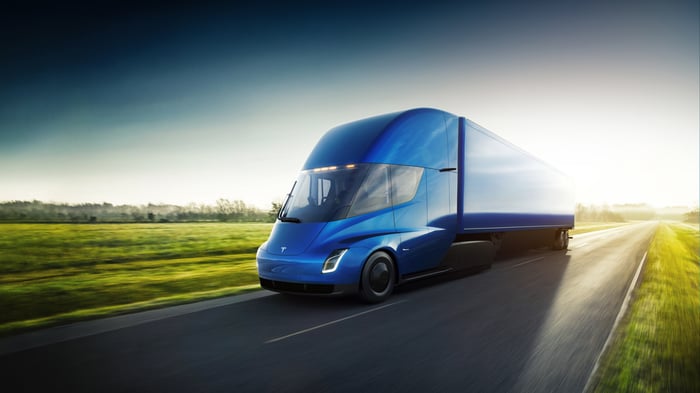 Tesla has built a few prototypes of its Semi, a sleek battery-electric heavy truck. But it's not clear when (or where) it'll go into production. Image source: Tesla, Inc.

And given its all-out effort to get production of its compact sedan up to speed, it seems unlikely that Tesla's engineers have had much bandwidth to work on the Semi since it was revealed last fall.

The upshot: For once, Tesla seems to be behind

Tesla has fostered big, big expectations for the Semi -- but it's not clear when (or whether) it'll be ready to deliver. Meanwhile, the current prototype version of the eCascadia might not quite match the Tesla Semi's range, but it's on schedule for a 2021 launch -- and it's coming from a company that truck-fleet operators know they can trust.

For now, at least, I think we have to conclude that Tesla is in an unaccustomed position with its heavy truck: behind at least one legacy company.