Apple (NASDAQ:AAPL) is revamping one of its most controversial services, Apple Maps. The initial rollout of Apple Maps in 2012 was nothing short of a disaster, leading to years of jokes about how bad it was and even contributing to the ouster of former software chief Scott Forstall, who had refused to apologize about the botched launch. CEO Tim Cook had to pen the apology instead. The Mac maker had sparred with Alphabet (NASDAQ:GOOG) (NASDAQ:GOOGL) subsidiary Google at the time over turn-by-turn directions, and Google's decision to withhold that differentiating feature was the driver of Apple's decision to make its own mapping service.

Apple Maps has certainly improved in the years since, but there's still plenty of work to do. 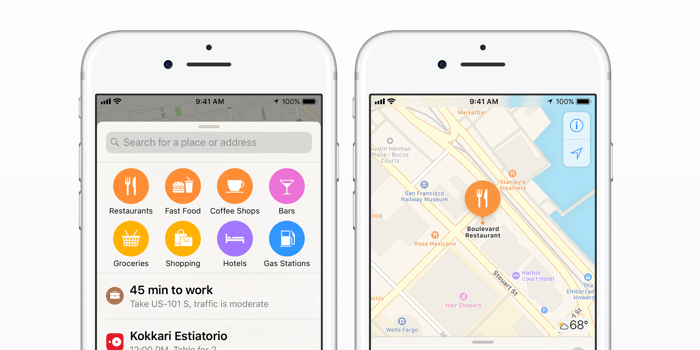 TechCrunch reports that Apple is rebuilding the service "from the ground up," with the most significant distinction being that Apple is ready to construct the service using its own first-party data instead of relying on third-party data sources. For example, the original version licensed data from TomTom and OpenStreetMap, among others. (TomTom shares have tanked following the report.)

Apple has spent years collecting that data with a fleet of vehicles that are equipped with various cameras and sensors. Anecdotally, I have seen Apple's mapping vans a handful of times in recent years driving around the Denver area. Much like Google, Apple will also harness the millions of smartphones that use its mapping service for collecting anonymized data that can be used to derive things like traffic and road conditions.

"Since we introduced this six years ago -- we won't rehash all the issues we've had when we introduced it -- we've done a huge investment in getting the map up to par," Apple services chief Eddy Cue told TechCrunch. He continued:

It's worth noting that some of the location data that Apple is collecting with lidar sensors can potentially be used to help its development of autonomous driving systems.

Mapping has become a core function of modern mobile devices, and while Google Maps remains the gold standard, it's still important enough for Apple to compete. Perhaps Apple's most potent tool is that Apple Maps is the default map app for system functions (which has raised antitrust concerns, much like other scenarios involving bundled software). While Apple Maps is unlikely to directly spur iPhone sales, the company feels that it can provide mapping with a greater level of privacy, a debate that has only been becoming more prominent over time.

Advertising is Google's primary monetization strategy for Google Maps, surfacing ads for local businesses based on what mapping query is entered. Apple prefers to shy away from advertising businesses due to the inherent privacy compromises, and only engages in selling advertising as a way to help third-party stakeholders like iOS developers better monetize their apps.

Every piece of data that Apple is collecting for Apple Maps is fragmented and anonymized, according to the report. If you've ever gotten an unsolicited email from Google prodding you to review a place you recently visited -- without even getting directions from Google Maps, but just having your phone in your pocket -- you know what location-based privacy compromises I'm referring to.

As consumers have become increasingly sensitive to privacy compromises in the wake of various scandals, there's much greater value in providing these services in a way that does not have privacy costs. Whether or not that helps Apple sells iPhones remains to be seen.