The food business is more competitive than ever, and General Mills, Inc. (NYSE:GIS) has felt the squeeze from a variety of sources. It wasn't prepared for the wave of natural and organic products hitting the market; it's facing competition from smaller, more nimble companies; and expenses like rising fuel costs are hurting its bottom line.

In the fourth quarter of fiscal 2018, the company showed that it's starting to see benefits from strategic changes it's made over the last few years. Revenue was up 2% to $3.9 billion, and segment operating profit was up 8% as its U.S. business began to rebound. If the trends continue, this stock could be a great value for long-term investors. 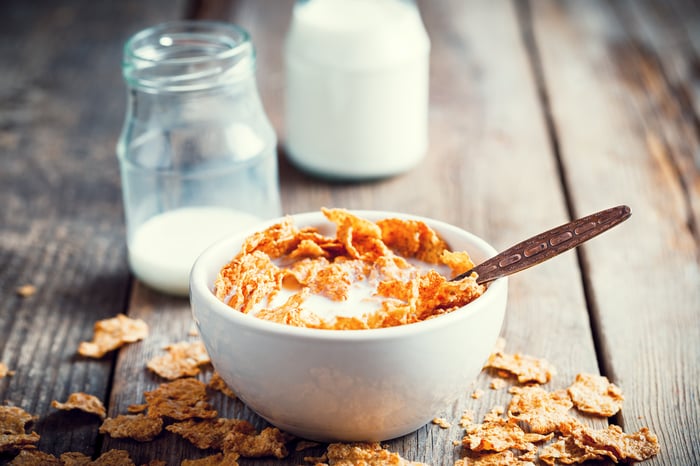 Where General Mills is seeing growth

The fourth quarter continued some general trends we've seen from General Mills over the past year. Retail sales are declining slightly, while the convenience store and foodservice segment is demonstrating consistent growth. What was new in both segments last quarter was a jump in operating income.

Management said that operating income growth in the U.S. business was driven by higher sale prices, lower operating costs due to previously announced layoffs, and lower raw material costs. The price increases in particular are important for General Mills, as they enable it to pass added costs on to customers.

Pet food isn't a growth business for General Mills yet

What we're not seeing in the results above is the impact of the $8.0 billion acquisition of Blue Buffalo Pet Products, which closed in April. This division will expand the company's market beyond human food to pet foods, which is one of the few food businesses that's growing rapidly today.

The logic behind the acquisition is that pet food will help General Mills' overall growth, and the company can leverage its scale to lower costs and expand distribution of Blue Buffalo's products.

General Mills thinks that this benefit from Blue Buffalo will drive near double-digit growth in fiscal 2019.

Growth is back at General Mills

Management gave guidance for fiscal 2019 of 9% to 10% net sales growth, although organic growth is expected to be flat to 1% while adjusted operating profit is expected to grow 6% to 9% overall. As much as the growth in sales and operating profit is encouraging, adjusted diluted earnings per share is expected to be flat to down 3%, in large part because of the sale of 2.3 million shares of stock and the issuance of $6.05 billion in new debt to fund the Blue Buffalo acquisition.

Top-line growth will likely be strong for the next year or two, but the bottom line is likely to grow more slowly given the equity dilution and debt costs for the $8.0 billion Blue Buffalo acquisition. The pet food company generated just $193.5 million in net income last year, and the cost to service debt alone will eat up about the same amount of the company's net income through higher interest expense.

Management was willing to take on this cost in exchange for growth, however, and in the long term, having a growing business will be a good thing. Given retail and convenience stores & foodservice appear to be back to operating income growth, General Mills should be well positioned to end its recent operational slide.

The fundamental improvement in its business makes me think General Mills is finally a stock worth buying again, especially with shares trading at just 15 times trailing earnings and a dividend yielding 4.4%. That's a value that's too good to pass up in today's market.