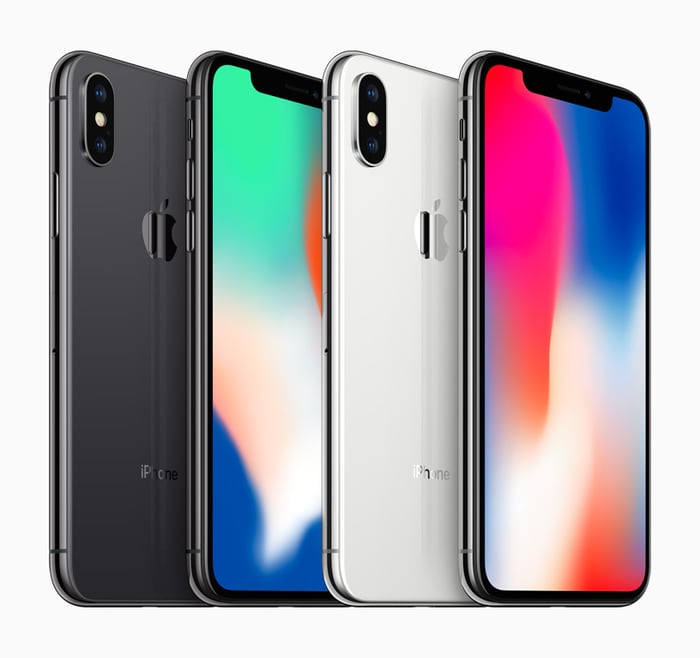 According to analysts with Canaccord Genuity, Apple generated 87% of the smartphone industry's profits during the fourth quarter of 2017, with the rest of the industry -- which is replete with players -- capturing just 13% of the total profit pool.

It's important to note that the fourth calendar quarter of 2017 just so happened to be Apple's peak quarter, while representing the trough for many others as their product launches typically happen in the spring, but it's clear that Apple captures the lion's share of the smartphone market's profits each year.

Here, I'd like to go over two factors that impact Apple's iPhone gross profit margins so investors can have a better idea of what helps drive the profitability of Apple's iPhone business (which made up 66.7% of the company's revenue during the first half of the current fiscal year, fiscal year 2018).

Gross profit margin is a function of how much a product sells for and how much that product costs to make. For a product like the iPhone, component costs dominate production costs.

A smartphone typically consists of a screen, several cameras, a multitude of chips (e.g., applications processors, memory chips), haptic feedback motors, and a lot more. Other product costs include the retail packaging as well as the included components such as earbuds.

Typically, the more sophisticated a device is, the more expensive the components it's made up of are. One of Apple's jobs in trying to run a successful business is to strike a good balance between the features it adds (since more features ultimately translate to higher costs) and what the company can try to charge for its product (higher component costs tend to mean higher product selling prices to keep gross profit margin at acceptable levels).

It's not just features that drive component costs, though. A big chunk of a smartphone's bill of materials comes from memory components, such as DRAM and NAND flash, which are used as system memory and storage, respectively. Those commodity prices are dictated by many factors outside of Apple's control such as overall industry supply and demand dynamics.

Apple can control those costs to some degree by being judicious in how much NAND and DRAM it includes in its devices, and optimizing its software to require as little as possible, but ultimately, every computing device needs DRAM and NAND, and the amount required per device continues to increase.

A device that's more expensive to manufacture than another device doesn't necessarily carry lower gross profit margins. In fact, the whole point of cramming in new features and technologies is to make devices more desirable to consumers, which, if done right, should convince them to pay more for the more expensive product while still keeping overall unit demand healthy.

To illustrate, recall that Apple launched three new flagship smartphones last year: iPhone 8, iPhone 8 Plus, and iPhone X. The iPhone 8 and iPhone 8 Plus were priced roughly in line with their predecessors, the iPhone 7 and iPhone 7 Plus, respectively. The iPhone X was priced well above them, though, with the model with the smallest storage configuration starting at $999, and the one with larger storage coming in at $1,149.

"Since we split the line with the launch of the iPhone 6 and iPhone 6 Plus in 2014, this is the first cycle in which the top of the line iPhone model has also been the most popular," Cook said.

In this case, Apple made a great business call by building a more expensive iPhone, but betting that customers would be willing to pay that premium for all of the new features and improved aesthetics.

Ultimately, gross profit margin is a function of both production costs and selling prices, and a great company like Apple is able to build products that strike a good balance between component costs and selling prices. After all, if a company makes a device that's too expensive, few are going to buy it, but if a company makes a device too cheap, then it may simply not be compelling enough to stand out in an already crowded smartphone market.

Apple's execution during the current iPhone product cycle has been quite good, and I think that as the overall smartphone market continues to see muted unit shipment growth, Apple will continue to optimize its revenue and profitability by trying to build products that ultimately compel customers to buy more expensive, feature-rich devices.