"We are not particularly worried."

Those were the words spoken by Walgreens Boots Alliance (NASDAQ:WBA) CEO Stefano Pessina when asked about Amazon.com's (NASDAQ:AMZN) acquisition of online pharmacy PillPack during Walgreens' Q3 earnings call Thursday morning. While Pessina was speaking, the company he leads was quickly losing more than $6 billion of its market cap -- nearly 10% -- from the threat he wasn't worried about.

Investors clearly are worried. One major investment firm, Bank of America Merrill Lynch, recommended selling Walgreens Boots Alliance stock, in part because of the potential challenge from Amazon. But others remained confident about Walgreens' long-term prospects.

Should investors sell or hold on? In my view, it depends on how seriously Walgreens is taking the Amazon threat. But does Walgreens' management team have its head in the sand right now? 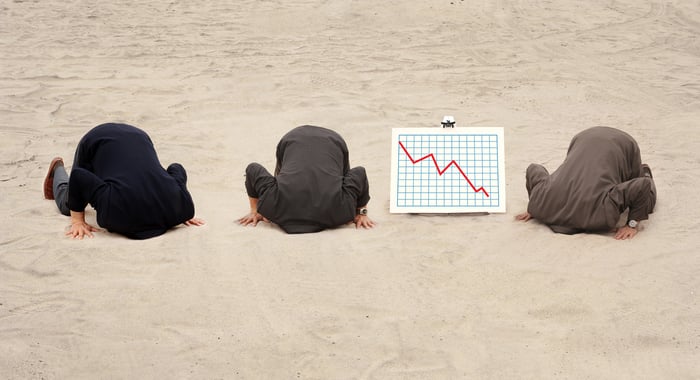 I picked up several key themes regarding Amazon's acquisition of PillPack from the statements of Walgreens executives during the company's Q3 call. Pessina said that one of the reasons his team isn't concerned is that because "at the end of the day, it's [PillPack's] still a small company."

Pessina said that "we are not complacent." Actually, he said this twice during the conference call. Walgreens isn't worried about a threat from tiny little PillPack, but it's not sitting idly by doing nothing. Pessina maintained that Walgreens is "also working in that direction," apparently referring to the online pharmacy and home delivery capabilities offered by PillPack.

Walgreens Co-COO Alex Gourlay stated that "we've followed this company [PillPack], and we offer this service locally through our physical pharmacies, and we have that service plus many others that we service our communities with." He added, "I think we are confident we can compete. More than confident."

But what about throwing Amazon into the mix? Pessina called Amazon's announcement that it was buying PillPack "a declaration of intent." However, he also said, "But you see, the pharmacy world is much more complex than just delivering certain pills or certain packages."

Even though Walgreens is "working quite hard on that direction" of online pharmacy services, Pessina stated that the physical pharmacy will continue to be "very, very important in the future." When asked about the potential for Walgreens to make an acquisition to bolster its online pharmacy capabilities, Pessina replied, "We will not do something just because we feel that we have to do something." He added, though, that Walgreens' door is open to deals, "provided that the people who come through that door are sensible."

Let's parse through what Walgreens' management team said. First, to not be concerned about a competitor because it's small right now is, in my view, the height of arrogance. Small companies can often be the ones that big companies should worry about the most.

In this case, dismissing PillPack as just a small company is also, well, let's just say it's not smart. Why? Because PillPack is about to become part of another enterprise that claims a market cap of around $830 billion. That's nearly 14 times bigger than Walgreens Boots Alliance, by the way.

It's good that Walgreens is working to expand its online pharmacy capabilities. I truly don't think the company is being complacent. However, Walgreens also has a vested interest in offering online services that don't harm its physical stores.

This is exactly the scenario that Harvard professor Clayton Christensen described in his outstanding 1997 book The Innovator's Dilemma: When New Technologies Cause Great Firms to Fail. As Christensen pointed out, this tendency to try to protect an existing business model often dooms companies that face competitive threats from new technologies.

I also suspect that Walgreens might be overestimating the strength of its moat with respect to the complexity of the pharmacy business. Yes, there are lots of regulations with selling and distributing prescription drugs. However, there are also plenty of people with the expertise to navigate these regulations -- and Amazon has plenty of money to hire them.

PillPack already has pharmacy licenses in all 50 U.S. states. The company is already in the networks of most pharmacy benefits managers (PBMs) and Medicare Part D prescription drug plans. Quite frankly, PillPack has already done a pretty good job of mastering the complexities of the pharmacy business. And if Amazon needs more expertise, you can bet that it will get it.

Stefano Pessina said one thing with which I agree 100%: It's important "to separate the emotion from the facts." Some of the sell-off of the stocks of major pharmacy chains like Walgreens was based on emotion.

What are the facts? A massive retail giant that has entered and dominated multiple industries in the past now has its sights set on the retail pharmacy business. It is spending nearly $1 billion to buy a company that has established itself as a potential disruptor in that business. And the top executives of the No. 1 company in that industry say that they're not worried.

Maybe Pessina and his team really do have a plan that will fend off Amazon. I think, though, that investors would have preferred to have heard Walgreens executives express that they're taking the threat from Amazon seriously rather than largely dismiss it.

I don't expect Amazon to put Walgreens out of business. However, it won't be surprising at all if Amazon captures a significant chunk of retail pharmacy market share over the next several years. That could put considerable pressure on Walgreens and affect its stock. If I didn't see this possible future scenario, I'd have my head in the sand.

Does Walgreens Have Its Head in the Sand About the Amazon Threat? @themotleyfool #stocks $WBA $AMZN Next Article
Current