Shares of AES Corporation (NYSE:AES) -- formerly known as Applied Energy Services -- have rewarded investors nicely this year, rising 23% since January, and are up 23% over the past 12 months as well, handily outperforming the S&P 500. One reason for the stock's outperformance is that AES has had some success monetizing assets in Latin America, but as Merrill Lynch warns in a downgrade covered by StreetInsider.com (subscription required) this morning, this news may not be as good as it seems. 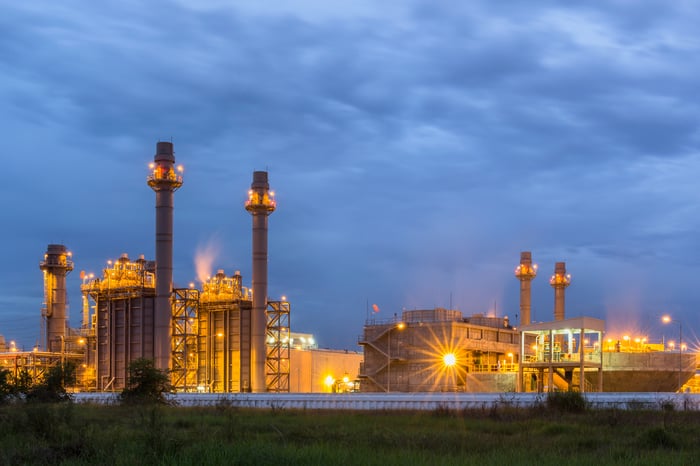 Selling out of Latin America

In May, Italy's Enel outbid Spain's Iberdrola to buy Brazilian grid operator Eletropaulo Metropolitana Eletricidade de Sao Paulo SA for $2 billion. AES, which owned a 17% stake in Eletropaulo, will net $310 million from the deal and apply that cash toward paying down its $19.7 billion debt load.

That may not sound like it will make a big dent, but Reuters reports that the bidding war between Enel and Iberdrola caused shares of Eletropaulo to "nearly" double "since early April." During that same period of time, shares of AES, which has about 55% of its energy assets spread out across Central and South America, gained 17%.

In Merrill Lynch's view, there's a connection to be found here: Investors are "being overzealous" and assuming that the run-up in price that we saw on AES's Brazilian assets translates into the rest of the company's "LatAm assets" being similarly undervalued.

Following this line of reasoning, if all of AES's LatAm assets -- currently valued at $11.1 billion, according to data from S&P Global Market Intelligence -- were to similarly jump in price by a factor of two, this might suggest to some investors that AES stock is worth another $11.1 billion more than its current $8.9 billion market capitalization.

Merrill Lynch does not subscribe to this view. Despite the happy news from Brazil, this banker warns that at current valuations, investors aren't taking into account "emerging market macro risks" in Latin America or AES' recent troubles in Bulgaria.

AES made a $2 billion investment in 2008 (already worth less than $1.3 billion in value, according to S&P Global data). Unfortunately for AES, the government of Bulgaria is currently in the process of terminating its long-term power purchase agreement with the company. When that happens, AES will no longer be paid "preferential prices" for the electricity produced by its Bulgarian coal plant, and will have to sell its power at presumably lower free market prices -- probably dinging profits.

Long story short, Merrill Lynch believes that AES' "valuation is excessive." The banker values AES stock at $12.50 per share -- 7% below current prices -- and predicts the stock will underperform the market over the next 12 months.

Although the news out of Brazil is encouraging, I can't help but notice that AES has failed to earn a full-year profit for two years running. The company did report a profit for Q1 of this year, and it is expected to return to profitability this year. In fact, analysts are forecasting a $1.60-per-share profit for 2018 -- probably helped by the Eletropaulo sale. Still, consensus estimates as reported by S&P Global suggest profits will decline by 25% to $1.21 per share next year, and average only about 8% annual growth over the next five years.

At first glance, that might seem OK. After all, at a share price of $13 and change, AES stock only sells for about eight times this year's expected profit. Paying eight times earnings for an 8% growth rate probably looks like a pretty fair price, especially with AES' 3.9% dividend yield. My big worry about this stock, though, is that with $19.7 billion in debt, and only $1.8 billion in cash on its balance sheet, this stock isn't nearly as cheap as its market cap makes it seem.

What would AES have to do to turn itself into a buy? Converting assets to cash and using that cash to pay down debt is a good start, but what AES really needs to do is generate more cash from the businesses it chooses to keep. Although the company recently returned to generating positive free cash flow, such cash profits declined from $527 million in 2016 to $231 million last year. Q1 2018 FCF was below Q1 2017 levels, so this important number appears to be headed in the wrong direction this year as well.

Until AES proves it can generate sizable cash profits from its business and grow them consistently, I'll be avoiding this stock.