Store-in-store concepts are not new. Retailers use them to try to generate a halo effect from the opening of a popular brand's boutique inside their stores. The hope is that the appeal of both brands can be improved by the synergies of joining forces.

Best Buy allowed Microsoft and Samsung to open up mini-stores to attract more customers; J.C. Penney increased customer traffic after opening Sephora-branded beauty care shops inside its department stores; and Macy's is going one better by combining store-in-store boutiques with the latest hot retail trend, pop-up stores, inside several of its locations.

But would people shop at a Sears store because it had a mini-Kmart inside, or go to a Kmart because there was a Sears boutique? Sears Holdings (NASDAQ:SHLD) thinks they will. 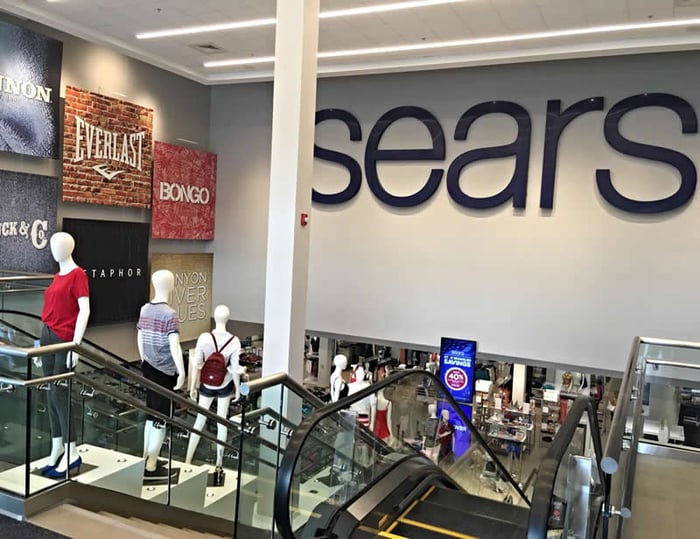 In yet another effort to reverse falling sales, Sears is opening a diminutive version of Kmart in a Brooklyn location, while also planning to test small-format Sears stores inside some Kmart locations. The two brands have been together for over a decade, but it wasn't until the retailer was near death's door that it considered this store-in-store concept.

On the surface, it seems to be just as bad an idea as chairman and CEO Eddie Lampert's original concept of merging two failing retailers into one large operation. Rarely does that create a winning combination, and Sears Holdings is a prime example of that.

Still, there could be some merit to the store-in-store plan. Although Kmart sells a number of the same types of products as Sears, the mini-Kmart will feature items you can't get at Sears, like cleaning supplies, pet supplies, groceries, and more.

Similarly, the mini-Sears shops inside Kmart will sell appliances. While Kmart does offer some appliances, they are only at the introductory end of the price scale; the Sears store-in-store boutiques will feature higher-end goods, according to CNBC.

The idea behind adding the 10,000-square-foot Kmart store-in-store is to make the Brooklyn Sears location a one-stop shop for customers. Instead of having to go to Kmart to get your groceries and then head over to Sears to buy other merchandise, you can do it all in one trip.

The store-in-store concept sounds like something that should have been tried a long time ago, but not many people expect it to change Sears' fortunes. It does suggest that Lampert still isn't giving up on Sears as a retail concept -- though maybe he should. Sears' sales have been plummeting quarter after quarter, causing it to burn through cash and forcing Lampert to continuously infuse it with short-term loans. Like many of his other experiments, this one is too little, too late.

Lampert was forced to sell the Craftsman tool brand to Stanley Black & Decker last year to raise cash to stabilize its balance sheet. However, because the Pension Benefit Guaranty Corporation had a lien on the asset, he needed its permission to make the sale and agreed to contribute a portion of the proceeds to Sears Holdings' pension plan. Lampert arranged to allow Sears to continue manufacturing Craftsman tools for 15 years and to receive a percentage of what Stanley makes from them, which will be used to fund Sears' pension obligation. Although Sears is ultimately competing against itself, it did make the best of a bad situation.

Lampert also finally allowed Sears' Kenmore and DieHard products to be sold in third-party outlets, including on Amazon.com. Sears also became the the first nationwide tire installer for tires purchased on Amazon, where it is trading on the residual popularity of the DieHard brand.

But customers continue to flee the retailer, with comparable-store sales down 12% in the latest quarter as revenue plunged 31% year over year. Much of that revenue decline is the result of closing hundreds of stores. If this latest idea is successful, we'll likely see even more stores close as the concepts are combined.

Yet this is an experiment that probably should have been tried at the start of the merger, not when the retailer is at the end of its life cycle. Having joined Sears and Kmart together, Lampert should have closed one and combined it with the other under one banner.

Yet with Sears and Kmart rapidly spiraling down the drain and customers fleeing both chains, this half-measure of opening boutiques inside each other's stores will likely fail like Lampert's other attempts at a turnaround. It is proof that sometimes late is no better than never.