Please ensure Javascript is enabled for purposes of website accessibility
Log In Help Join The Motley Fool
Free Article Join Over 1 Million Premium Members And Get More In-Depth Stock Guidance and Research
By Adam Levine-Weinberg – Jul 4, 2018 at 9:20AM

The growing regional airline pilot shortage is undercutting United Airlines' plan to expand in small cities across the U.S.

However, United Airlines now plans to cut several small-city routes from its Chicago hub after Labor Day. This could mean nothing more than that these particular routes are underperforming compared to other small-city flights. Yet it is also possible that United is being forced to rethink its entire expansion strategy.

Several small-city routes get the ax

In early September, United Airlines will stop flying from Chicago to three small markets: Champaign/Urbana, Illinois; Manchester, New Hampshire; and Mobile, Alabama. That said, United will continue to fly to Manchester from its Newark hub and to Mobile from its Houston hub.

On the other hand, United will exit the Champaign/Urbana market entirely. This is particularly notable because Champaign/Urbana was one of four destinations that United added to its route map last summer in the first phase of its small-city expansion plan. 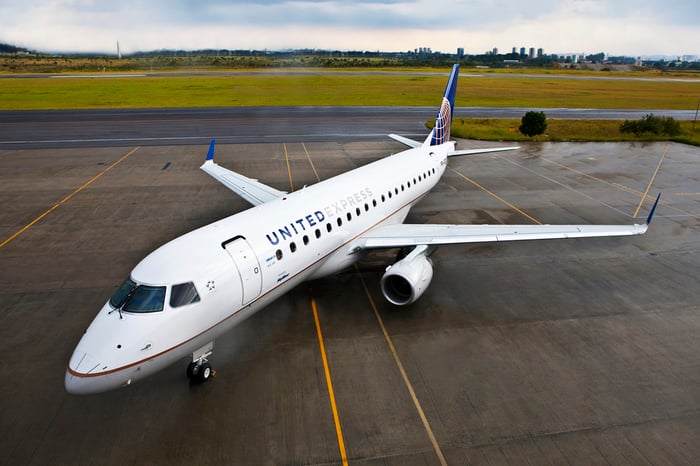 United will exit one of the small-city markets it entered just a year ago. Image source: United Airlines.

United told media outlets that the flight cuts were not driven purely by the financial performance of these routes. Instead, the carrier attributed the reduction to aircraft availability and a regional airline pilot shortage.

The pilot shortage may be the key

Of these potential explanations for United's pending service cuts, the most plausible is that a pilot shortage forced its hand. Of the three routes that will be canceled, two are flown by subsidiaries of SkyWest (SKYW 0.68%), while the Champaign/Urbana route is operated by Trans States Airlines.

It's unlikely that SkyWest is facing an immediate pilot shortage. The company has been steadily shrinking its fleet of 50-seat jets, helping it handle attrition as some pilots move to mainline carriers. Furthermore, as the largest and most profitable regional airline, SkyWest remains a preferred employer for new pilots. In April, SkyWest CEO Chip Childs said the company had surpassed its pilot hiring goals during the first quarter.

By contrast, Trans States Airlines may be facing more pressure. A few months ago, COO Fred Oxley told The Bismarck Tribune that the company was short about 100 pilots and, as a result, had been forced to ground 10 aircraft.

Trans States Airlines flies extensively on regional routes from Chicago for United Airlines. It's possible that Trans States told United that it didn't have enough pilots to fly its intended schedule for the fall, and that some routes operated by SkyWest subsidiaries are being canceled so that SkyWest can take over more lucrative Trans States routes.

Will this be the catalyst for a small mainline jet order?

United Airlines' 2018 fleet plan calls for it to increase its regional fleet by 36 aircraft, with 50-seat regional jets accounting for virtually the entire increase. Earlier this year, I noted that this reliance on 50-seat regional jets was not a viable long-term strategy. 50-seat jets offer a subpar customer experience. Furthermore, they are becoming increasingly uneconomical to fly because of rising pilot costs, high maintenance costs, and their poor fuel efficiency.

United sees the 50-seat jets as a stopgap solution until the carrier can reach a deal with its pilot union that will allow it to add more 76-seat jets to its regional fleet. These larger regional jets feel more like mainline jets to customers, are equipped with first-class sections, and have lower unit costs than their 50-seat brethren.

Under its existing pilot contract, United Airlines can add more 76-seat regional jets if it also adds small mainline jets with as few as 110 seats to its mainline fleet. After initially ruling out this option as too expensive, United may be coming around to the idea.

By "upgauging" to 76-seat regional jets and small mainline jets, United Airlines would be able to deliver the same amount of capacity with fewer aircraft -- and thus fewer pilots. This would help it mitigate the impact of the growing pilot shortage. While United would not be able to offer quite as many flights, that might be an acceptable trade-off for customers, given the superior comfort of larger jets. If United Airlines has changed its mind about small mainline jets, it could announce an order just two weeks from now, at the 2018 Farnborough Airshow.