Memory chip manufacturer Micron Technology (NASDAQ:MU) relies on China for about half of its revenue, with the company's sales in the country totaling $10.39 billion in fiscal 2017. This heavy dependence on the Chinese market makes the surprise announcement from semiconductor foundry UMC on July 3 all the more concerning.

A ban in China

UMC disclosed in a press release that the Fuzhou Intermediate People's Court in China had issued a preliminary injunction against Micron prohibiting the company from selling certain DRAM- and NAND-related products, including some solid-state drives and memory sticks, in the country. UMC had filed patent infringement lawsuits against Micron in January, related to DDR4 memory, solid-state drives, and memory used in graphics cards. 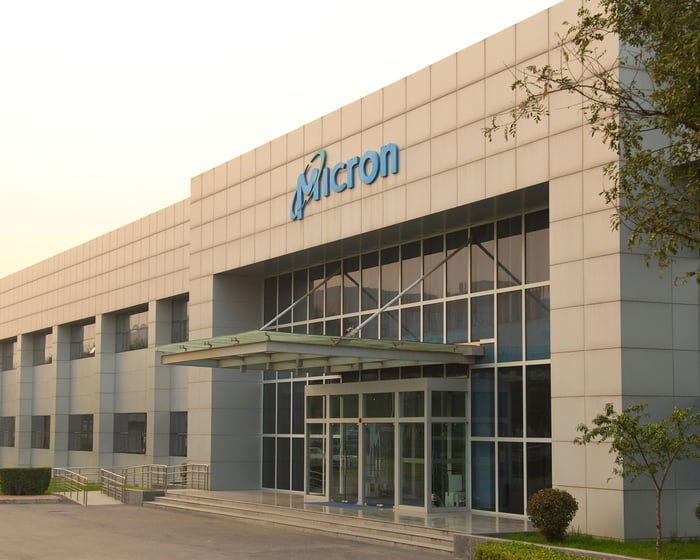 Micron announced on July 5 that two of its Chinese subsidiaries had received notification from the court regarding the preliminary injunction. Under the injunction, Micron's Chinese subsidiaries are required to stop "manufacturing, selling, or importing certain Crucial and Ballistix-branded DRAM modules and solid-state drives in China," according to Micron's press release.

The good news for Micron is that this order doesn't seem to include DRAM or NAND chips. Micron stated that the affected products account for a bit more than 1% of its annualized revenue. The company left its fourth-quarter revenue guidance range of $8 billion to $8.4 billion unchanged, despite a small expected negative impact from the injunction.

"We strongly believe that the patents are invalid and that Micron's products do not infringe the patents. The Fuzhou Court issued this preliminary ruling before allowing Micron an opportunity to present its defense," said Micron SVP, general counsel, and corporate secretary Joel Poppen in the company's press release.

This injunction is a minor setback for Micron, which is enjoying a period of record revenue and profits driven by strong demand and frothy pricing for its DRAM chips. The revenue hit will be almost unnoticeable in the company's fourth-quarter results.

But the company is facing other challenges in its biggest market. China is currently investigating whether Micron, along with rivals Samsung Electronics and SK Hynix, have been fixing prices. Per-bit memory prices generally go down over time, but Micron enjoyed a 19% surge in per-bit average selling price in fiscal 2017. A supply-demand imbalance has been pushing up prices, but China may believe there's more to the story.

Both the injunction against Micron and the price-fixing probe are playing out against the backdrop of a brewing trade war between the U.S. and China. Tariffs on $34 billion of Chinese goods are set to take effect on July 6, and China has vowed to respond immediately with tariffs of its own.

It's unclear whether the injunction or the price-fixing probe are being influenced by these souring trade relations. China could opt to punish individual American companies as part of its response, potentially threatening half of Micron's annual sales.

No problem for now

For now, Micron will continue to produce exceptional results. The company expects fourth-quarter revenue to grow by 34% year over year at the midpoint of its guidance range, and it sees diluted earnings per share rocketing 63% higher. The injunction won't derail Micron's record performance.

And in the long run, Micron expects artificial intelligence and autonomous cars to drive robust demand for its chips. The company is so confident that brutal downturns are a thing of the past that it committed to a massive $10 billion buyback in May, about seven months after selling shares at a lower price to pay down debt.

While this limited ban is a minor issue for Micron, further action from China could cause serious problems down the road. The unlikely worst-case scenario, a full ban on all Micron products in China, would flip the supply-demand picture for the company on its head.

It's hard to quantify these risks, but Micron investors ignore them at their peril.