That rally burned many bears, who assumed that Micron, a typically cyclical stock, would eventually tumble as memory chip supplies eclipsed market demand. Micron bulls have been arguing that this cycle was different: A growing number of connected devices -- not just PCs, tablets, and phones -- now require memory chips, meaning that Micron's sales shouldn't abruptly decline, as they have in previous years, but instead steadily climb higher on a "super cycle" of Internet of Things (IoT) devices. 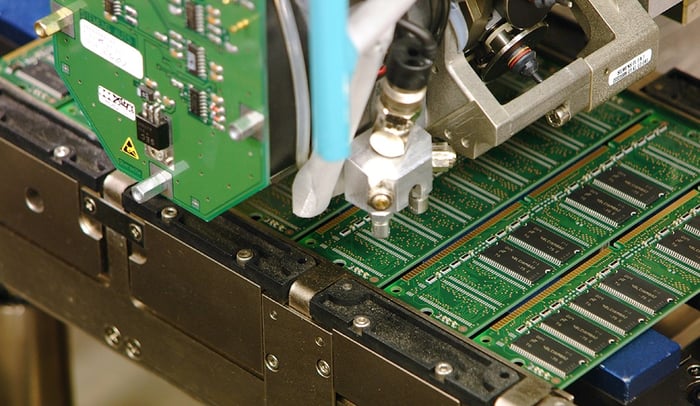 However, a recent report from TrendForce's DRAMeXchange claims that China's Ministry of Commerce -- which focuses on antitrust probes -- recently met with Micron to express concerns about rising DRAM prices. The regulators claimed that Chinese PC OEMs were struggling with those high prices and that Micron had hobbled Chinese memory chipmaker JHICC with a patent infringement lawsuit to throttle its production.

This doesn't mean that China will launch an antitrust probe into Micron, but it raises some troubling questions about the chipmaker's future.

Micron controlled 23% of the global DRAM market during the first quarter, making it the third-largest manufacturer after Korean tech giants Samsung (NASDAQOTH: SSNLF) and SK Hynix. China is the world's largest importer of memory chips, consuming 20% of DRAM and 25% of NAND chips worldwide.

To reduce its dependence on foreign chipmakers, China aggressively invested in the expansion of its domestic DRAM and NAND industries. The top players include Tsinghua Unigroup, the state-run tech giant that tried to buy Micron nearly three years ago, state-backed chipmaker Changjiang Storage, JHICC, and Innotron.

In late 2016, former Micron CEO Mark Durcan warned that China's chipmaking efforts could create an abrupt "oversupply" of memory chips across the market. However, DRAMeXchange's report claims that China's domestic memory chipmaking market can't "cope with the cost pressure immediately," and will require "at least a couple of quarters" to "realize independent R&D in technology and stabilize the scale of mass production."

China's National Development and Reform Commission (NDRC) notably met with Samsung earlier this year to discuss rising prices, but that didn't lead to an antitrust probe. There's also no evidence to suggest that that meeting is related to the one with Micron.

Unresolved trade tensions between the U.S. and China could make it easier for Chinese regulators to clamp down on Micron instead of Samsung or SK Hynix. DRAMeXchange notes that Chinese regulators might cite Micron's lawsuit against JHICC in an antitrust case against Micron by claiming that the lawsuit was aimed at "limiting" the amount of available memory on the market instead of resolving patent disputes.

That case could be supported by two other factors. First, Micron, Samsung, and SK Hynix were recently hit by a class action lawsuit in California which alleges that the three companies colluded in a price-fixing scheme to keep prices high. Second, DRAMeXchange notes that all three companies' chipmaking operating margins hover near record highs of 50% to 70%, which indicates that the companies have plenty of room to either lower prices or increase their production.

Micron, Samsung, and SK Hynix are all expected to boost their DRAM production capacities by 2019. China's meeting with Micron might simply be to assess the industry's future, and not a precursor to an antitrust probe -- but investors should still be cautious.

I wouldn't be surprised if escalating trade tensions between the U.S. and China sparked an antitrust probe against Micron.