Yum China Holdings (NYSE:YUMC) can boast of many superlatives in the Chinese eating-out market. It's the largest restaurant chain in China. With over 8,000 locations, it has more than 2.5 times the units of its next-largest competitor, Starbucks Corporation. It claims the mantle of being the biggest restaurant delivery system in China. And it counts 160 million people in its loyalty programs -- a number equivalent to half of the current U.S. population.

But for all its sheer size and influence, and despite a relatively free hand in operations since its November 2016 spinoff from Yum! Brands, Inc., Yum China Holdings is still learning to navigate the nascent Chinese casual dining market. This is easily discerned when comparing the diverging fortunes of its two major brands, KFC and Pizza Hut.

In the first quarter of 2018, Yum China's KFC brand delivered a same-store sales increase of 5%, which new CEO Joey Wat attributed in part to product innovation. KFC rolled out a series of premium products during the quarter, including a seafood item, the "Crayfish Burger," a spicy chicken burger, and stuffed chicken wings. During the company's earnings conference call, Wat noted that the stuffed chicken wings are a Chinese delicacy and labor-intensive to prepare, and typically associated with high-end restaurants. According to Wat, "[KFC] made a breakthrough by offering premium products at very affordable prices."

This performance was bolstered by KFC's shrewd marketing strategy during the Chinese New Year, which combined a massive digital outreach with value offerings on items ranging from one-person combos to special Chinese New Year jumbo buckets. 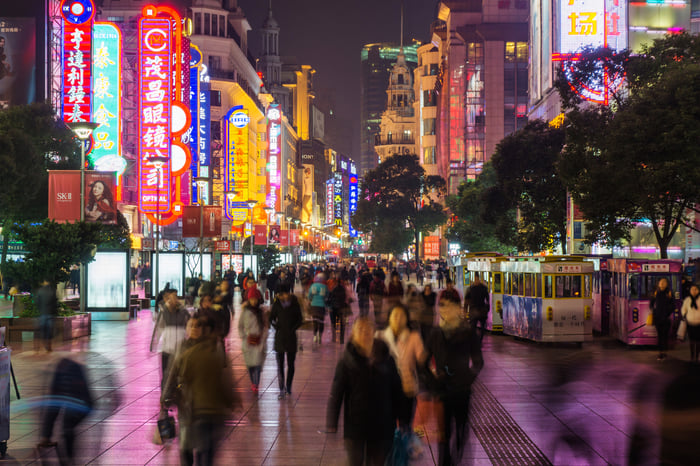 Yum China's Pizza Hut brand also invested heavily in innovation during the first quarter. The segment offered customers three new premium products, including its own seafood specialty: a pizza topped with abalone. Unfortunately, Pizza Hut's experimentation didn't resonate with consumers. On this performance, Wat observed the following: "Our consumer intelligence showed that these products were a bit too niche, and therefore, did not have enough mass appeal across the country at all city tiers."

Of course, Pizza Hut has struggled for years in China, and it's been in an extended turnaround mode that predates Yum China's spinoff from Yum! Brands. Yum China has often noted that Pizza Hut is the largest casual dining chain in China, at more than 2,200 units. Scale can be an obstacle as much as an advantage. The company has warned investors that fundamentals will take time to improve, and Wat asserted on the earnings call that there will be no "overnight quick fixes."

Like its quick-service sibling KFC, Pizza Hut is an entrenched competitor, but unlike KFC, it doesn't enjoy a sustained cachet among Chinese consumers. The company faces competition from higher-end restaurants on one extreme, and on the other, it's subject to numerous fast-food value choices available to restaurant goers, including local restaurants, McDonald's, and of course, KFC itself.

Pizza Hut's first-quarter menu experimentation was a brand-positioning exercise, to see if the division could begin to win over a more discerning customer. At least in this iteration, it couldn't convince customers of the value of its higher-priced limited time offerings. Ultimately, however, I believe that such specialty differentiation may be the correct path to revitalizing the brand -- perhaps not everyone is a huge fan of abalone.

And despite its long swoon, Pizza Hut isn't a lost cause in China. The company is experimenting with multiple new store formats, and recent statistics point to a still-expanding core customer base. At the end of the first quarter, digital loyalty program members doubled year over year, from 20 million to 40 million. Sales to digital members increased 46% versus the first quarter of 2017. Pizza Hut also achieved 26% growth in delivery services -- a solid statistic for a pizza chain, though in China the business model has until now favored eat-in visits.

Yum China reports second-quarter earnings in less than one month, on Aug. 1. Expect the Pizza Hut division to continue to see more experimentation -- as Wat suggests above, fixes won't occur overnight. But they should occur quarterly, as Yum China continues its education in cracking its own market.