Please ensure Javascript is enabled for purposes of website accessibility
Log In Help Join The Motley Fool
Free Article Join Over 1 Million Premium Members And Get More In-Depth Stock Guidance and Research
By Leo Sun - Jul 8, 2018 at 11:30AM

Which Internet of Things stock is better positioned for a rebound?

Infinera (INFN 4.29%) and Skyworks Solutions (SWKS 3.99%) are plays on the Internet of Things (IoT) market -- which includes a growing number of devices connected to each other and the cloud. The global IoT market could grow from $157 billion in 2016 to $457 billion in 2020, according to research firm IDC.

Infinera provides fiber-optic systems for service providers. It generates most of its revenue from long-haul wave division multiplexing (WDM) optical transmission systems -- which enable telecoms to increase their network capacities over long distances without laying down additional fiber. A smaller percentage of its revenue comes from the metro WDM and data center interconnect (DCI) markets, which involve shorter distances. 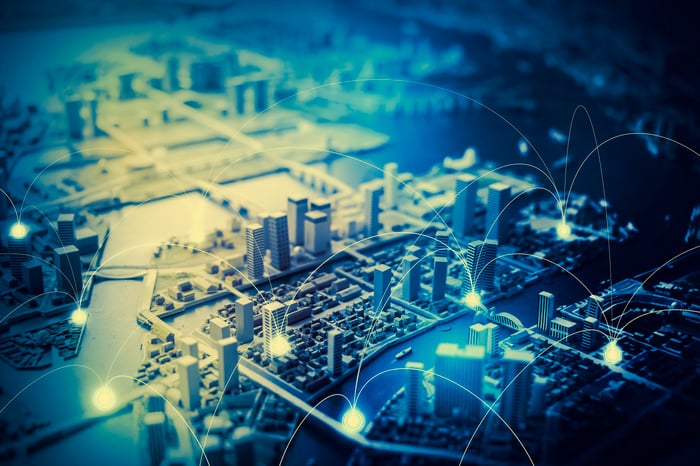 Skyworks supplies radio-frequency chips for the mobile, automotive, broadband, wireless-infrastructure, home-automation, industrial, and military industries. Last year, Skyworks generated most of its revenue from three customers -- contract manufacturer Foxconn, Samsung, and Huawei -- which each contributed 10% or more of its total revenues. However, Mizuho Securities analyst Vijay Rakesh estimates that orders from Apple (AAPL 4.08%), via Foxconn, account for 35% to 40% of Skyworks' sales.

Infinera was once considered a growth play on the worldwide "super cycle" in fiber upgrades, which was buoyed by the soaring use of cloud services, streaming media, and mobile apps. Unfortunately, its growth hit a brick wall in the second half of 2016 as orders in China slowed down and carriers focused on short-range WDM and DCI upgrades instead of long-distance ones.

Infinera didn't start generating positive revenue growth again until the second half of 2017, when those headwinds finally subsided. However, its revenue growth then remained positive and accelerated over the past three quarters. Its sales rose 15.5% annually to $202.7 million last quarter, and it expects 14.8% to 20.5% growth for the current quarter. Analysts expect Infinera's sales to rise 13% for the full year, compared to a 15% decline last year. Its stock trades at just 1.8 times this year's sales. 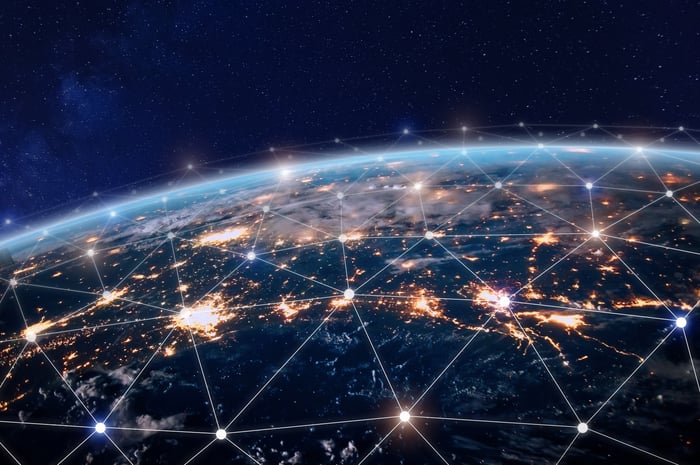 Skyworks has been diversifying into fresh IoT markets like connected cars, wearables, and smart appliances, but its fate remains tightly tethered to Apple's. Therefore, peaking demand for iPhones and iPads is causing many investors to question Skyworks' long-term growth.

Skyworks' revenue rose 7.2% annually to $913.4 million last quarter, but that marked its slowest growth in five quarters. Skyworks' forecast for flat sales to a 2.9% sales decline for the current quarter indicates the slowdown isn't over, and analysts anticipate just 6% sales growth this year -- compared to 11% growth last year. Skyworks' stock trades at 4.6 times this year's sales.

Infinera has been unprofitable (on a non-GAAP basis) for six straight quarters, but it expects to return to quarterly profitability in the second half of the year. Analysts expect Infinera to post a net loss of $0.09 per share for the full year -- which would be a huge improvement from its loss of $0.54 last year.

Wall Street expects Infinera to post earnings of $0.21 per share next year. At $10, Infinera trades at 48 times that estimate. That valuation looks high, but its multiple could quickly cool down as its earnings keep rising.

Skyworks is consistently profitable by both non-GAAP and GAAP metrics, but its growth is slowing down. Its non-GAAP EPS rose 13% annually last quarter, but management expects just 1% to 2% growth for the current quarter. Wall Street still expects the company's earnings to rise 10.4% for the full year, but dip to 9.8% growth next year.

Skyworks currently trades at about 14 times this year's EPS estimate and 12 times next year's estimate. Skyworks also pays a forward dividend yield of 1.3%, while Infinera has never paid a dividend.

Both Infinera and Skyworks will benefit from the growth of the IoT market and 5G network upgrades. However, Infinera's accelerating sales growth, visible path toward profitability, and fading macro headwinds make it a better pick than Skyworks, which faces slowing growth and tough questions about Apple's future.