Microsoft (NASDAQ:MSFT) could be developing a new portable Surface device, according to an internal document obtained by The Verge. The document reportedly describes the project -- which was dubbed "Andromeda" in previous patent filings and reports -- as a "new and disruptive" device that could blur the lines between PCs and smartphones later this year.

Specifically, Microsoft calls Andromeda "a new pocketable Surface device form factor that brings together innovative new hardware and software experiences to create a truly personal and versatile computing experience." Based on Microsoft's latest patents, the device resembles a dual-screen foldable smartphone that could use one screen as a keyboard and the other as a display. 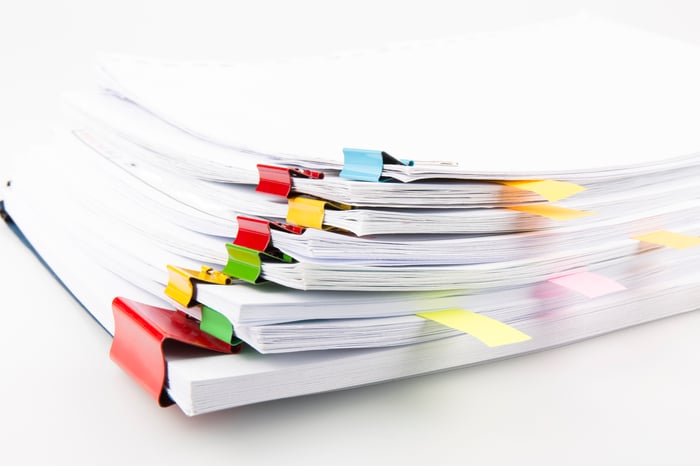 In other words, it might look similar to ZTE's dual-screen Axon M smartphone, which TechCrunch called a "fascinating mess" last year. However, it's far too early to jump to conclusions, and there were plenty of other rumors about Microsoft's elusive "Surface Phone" over the past few years.

Why would Microsoft need a smaller Surface device?

Microsoft's greatest failure over the past decade was its loss of the mobile OS market to Alphabet's (NASDAQ: GOOG) (NASDAQ: GOOGL) Google and Apple (NASDAQ: AAPL). Windows Phone and Windows 10 Mobile devices only account for 0.2% of the mobile market today, according to NetMarketShare.

Last year, Microsoft ended support for Windows Phone, and halted the development of new features for Windows 10 Mobile. There simply weren't enough users or developers interested in Windows-powered smartphones anymore, and Microsoft pivoted its mobile efforts toward iOS and Android versions of its cloud-based apps instead.

Meanwhile, Microsoft's Surface 2-in-1 devices carved out a higher-growth niche in the stagnant PC market, and helped the company offset its mistakes in the smartphone market. Last quarter, Microsoft reported that its Surface revenues rose 32% annually, buoyed by "better than expected" sales of the Surface Book and an easy comparison to a cyclical slowdown in the prior year quarter.

Microsoft currently sells a wide variety of Surface products, including the Surface Pro 2-in-1 devices, the Surface Book detachable notebooks, the hybrid Surface Laptop, the Surface Studio all-in-one PC, and the massive wall-mounted Surface Hub for enterprise video conferences. However, persistent rumors suggest that Microsoft will eventually add a "Surface Phone" to that lineup -- which could benefit from robust customer demand for Surface-branded devices. 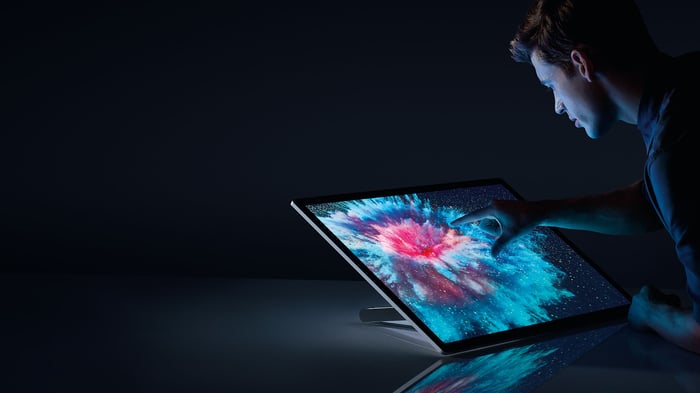 Microsoft's success with the Surface inspired many OEMs to replace their aging laptop form factors with similar 2-in-1 Windows devices. According to the leaked document, Microsoft believes that "Andromeda" should have a similar effect, and that its top OEMs will follow with similar devices.

However, that outlook might be a bit too rosy. Microsoft had an easier time shifting the PC market's design aesthetics with Surface, as Windows was already the top PC operating system in the world. The mobile market will be a much tougher nut to crack since Apple and Google already hold a tight duopoly.

Even if Microsoft's dual-screen portable Surface turns heads, there's no guarantee that consumers will consider replacing (or even complementing) their iOS or Android devices with a pocketable Windows device. If Andromeda doesn't impress consumers the same way the other Surface devices did, OEMs probably won't follow its lead.

Will Andromeda be another "Surface Mini"?

Microsoft has pulled the plug on similar projects before. Back in 2014, Microsoft cancelled its notepad-like Surface Mini just a few weeks before its scheduled launch. The 8-inch tablet was aimed at Apple's iPad Mini and smaller Android tablets, but Microsoft likely decided that the market was already too saturated for a new Windows-powered device.

Microsoft could face a similar dilemma with Andromeda. It already leveraged its strength in PCs to expand in mobile devices with Windows Mobile 10, but the effort flopped because apps mattered more than operating systems. I'm not convinced that a "pocketable" Surface will fare any better, but Microsoft has surprised consumers before.

Could a Surface That Fits in Your Pocket Succeed? @themotleyfool #stocks $MSFT Next Article
Current