Shares of online retailer Etsy (NASDAQ:ETSY) are up 108% in 2018 as of this writing, riding a resurgence in both revenue and earnings growth. After struggling for its first few years as a public company, the about-face started when CEO Chad Dickerson and other top executives were replaced in 2017. The changes have been controversial, especially among Etsy employees, but investors have certainly been happy with the simplification of growth initiatives and renewed focus on Etsy's most important customers.

Focusing on the vital few

New ideas are the soil in which future innovation takes root, but sometimes, too many ideas are a distraction for a growing business. Such was apparently the case at Etsy before Josh Silverman took the helm.

To be fair, revenue never stopped increasing, but it was slowing down during a time that digital commerce really started putting the hurt on traditional brick-and-mortar stores. Too many projects stretched Etsy's limited resources thin, slowing down momentum. As a small disruptor in the industry, investors apparently expected more from the top line, especially while the bottom line was being sacrificed for expansion. 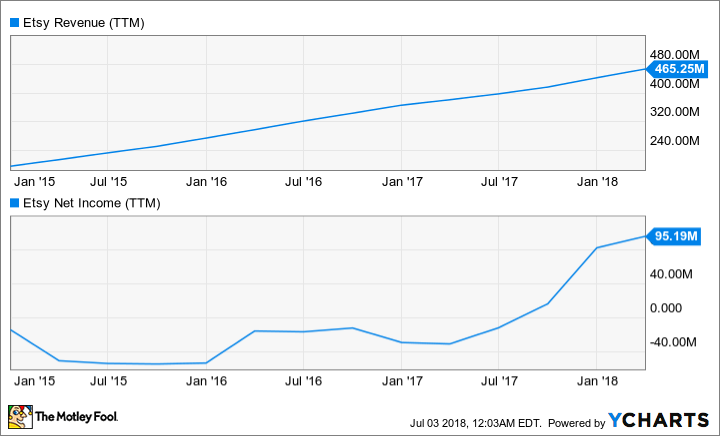 Silverman's solution was to reduce the number of projects down to a "vital few," focusing on only the best ideas with the highest chance of paying off. That came with a 22% reduction in employee count as Etsy shrank its core efforts around easier product searches, efficient marketing expenses, and better merchant tools to increase customer trust in the Etsy ecosystem. Another byproduct of that simplification was a $100 million share repurchase program announced at the end of 2017 that translated to new management putting money behind its words that its changes would pay off.

Before Silverman showed up, Etsy was known for its workplace culture and high employee satisfaction. That's certainly nothing to scoff at, but apparently, some of the care Etsy took in supporting its workforce came at the cost of productivity. The aforementioned narrowing of project scope when Silverman took the reins was part of Etsy getting back to its championing of its most important customer: the small and home-based businesses that sell crafts on the site.

The rollout of simplified merchant tools and better product search capabilities has helped boost a key metric for an online marketplace: gross merchandise sold (GMS). The total value of GMS also picked up pace during the first quarter of 2018 -- increasing 19.8% compared with 14.5% growth for the whole of 2017.

Management wants to keep the ball rolling in the small-business support department, saying it will increase its marketing expenses by 40% this year to help further increase traffic to the site. Guidance for 2018 GMS growth was recently revised to 16% to 18% compared with previous expectations for only 14% to 16% growth.

All of that merchant success and ongoing support is going to cost something, though, presenting a potential test for Etsy in upcoming quarters. The company recently announced it is increasing its cut from the value of GMS from 3.5% to 5% beginning in July. That's a big jump, but it's possible Etsy can get away with it because it's still a heavy discount compared with fees at rivals eBay and Amazon's Handmade service. However, if Etsy can continue to make its small-business merchants successful in the new digital economy, the fee increase will likely be justified.

What does that mean for investors? There's a decent chance that Etsy's rebound story continues with new growth initiatives in place equating to more revenue and profits. After doubling in the last six months, don't be surprised if some volatility kicks in in the near term, but overall, Etsy's future looks brighter than ever.

What's Behind Etsy's Double So Far in 2018? @themotleyfool #stocks $ETSY Next Article
Current