WWE (NYSE:WWE) is the Hulk Hogan of entertainment stocks right now. The wrestling company's share price has notched a series of fresh all-time highs after a pair of new TV deals were announced at the end of June.

When a stock vaults into the stratosphere like that, it brings up concerns that it's overheated and set for a major cool-down. Let's see if that fear might be justified in the case of WWE.

The companies involved were shy to reveal specifics. According to an article in The Hollywood Reporter, Fox is paying just over $1 billion in a five-year deal to broadcast SmackDown. It will start airing on Fox Sports in October 2019.

Comcast extended its rights to air Raw for five years. The Hollywood Reporter says that the price tag is $265 million per year, for a total of over $1.3 billion. Like the Fox deal, the renewal starts next October. 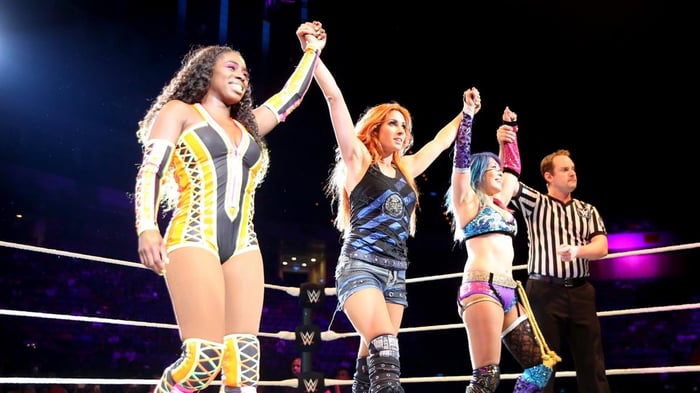 Those numbers are well higher than the existing figures. WWE's "key content agreements" (i.e. broadcast rights to Raw and Smackdown in the company's top territories) brought in $235 million in 2017: 29% of that year's revenue. In 2020, the first full year the new arrangements will be in force, the company expects that to more than double, to at least $514 million.

That's only the kickoff year of the deal and doesn't include new contracts with territories outside the U.S., several of which are currently under negotiation. These are relatively small; the on-the-bubble regions are "only" worth $79 million of revenue in 2020 under the terms of present contracts. Still, increases like those of the U.S. rights will add to the overall figure.

Your winner, and still champion...

It's hard not to get excited about the Comcast and Fox deals, but have they made the stock too expensive?

According to estimates published by Yahoo! Finance, on average 11 analysts tracking the company believe that WWE's earnings will be $1.41 per share in 2019. Although that's a 53% improvement over the company's anticipated 2018 EPS, it just matches WWE's forward P/E of 53. This suggests that the stock may be fairly priced.

As a WWE shareholder, though, I'm not ready to tap out yet. The Fox deal in particular presents opportunities for improvements in other segments. It can easily juice sales of merchandise, for example, or take-up of the company's proprietary WWE Network for new fans eager for even more wrestling.

Fox will be on the hook to make its investment worthwhile, so it's sure to be aggressive in promoting it. The company has a particularly strong audience base in Thursday Night Football, the rights for which it acquired recently for a big chunk of change.

WWE's stock price growth has been dizzying lately. It might slow or even reverse in the very near future, but I think the company is still a strong long-term play. Wrestling is a hot product, and WWE has been very effective in keeping it that way. The company should continue to improve its revenue and profitability well into the future.