Karen Mikolainis
(CMF_KBecks)
Author Bio
Karen writes about technology and consumer goods stocks for The Motley Fool, where she's been a community member since 1999. Follow her on Twitter @KMikolainis
Follow @KMikolainis

Customers build detailed profiles with their personal information, location and interests, and Momo helps them meet and connect virtually and in real life with users who are nearby. A variety of online entertainment, games, and video and audio chat groups (online karaoke, anyone?) make the experience fun and engaging as participants form new friendships. While the company began with a focus on dating and romance, Momo ignited its user base and revenue growth with live streaming video services in 2015.

All told, Momo is a $9 billion-and-growing, popular, profitable social media company in the world's most populous and internet-connected nation -- China. That buzzword-heavy description leaves plenty of fodder for the bulls and bears to make their cases with the stock. 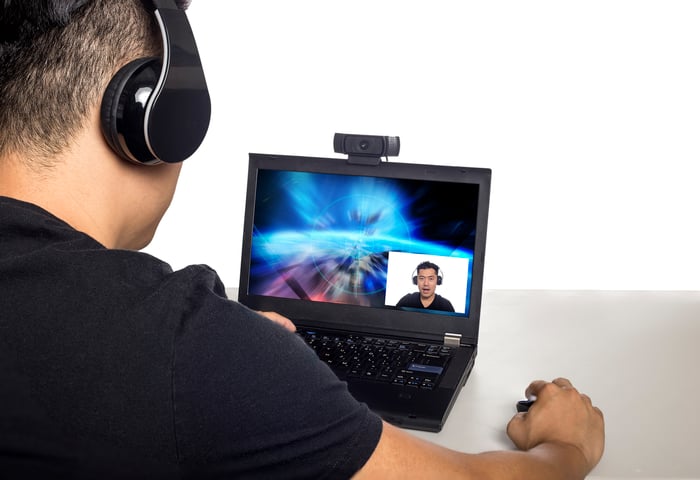 Fast, profitable growth. Since its IPO on Nasdaq in 2014, Momo has significantly expanded its user base, revenue, and net income. Momo's tremendous success with live video rocketed the company forward, increasing revenue tenfold and growing net income more than 22 times between 2015 and 2017.

A huge market. Mobile internet use in China is surging, with more than 731 million internet users and more than 50% of the population online. As the Chinese middle class grows and mobile use expands further, even more users will have access to Momo's unique social features.

Unique brand position. With a $9 billion market cap, Momo is tiny compared to Chinese media giants like Tencent Holdings. Tencent's popular WeChat app dwarfs Momo's 10 times over, with more than 1 billion monthly users. While smaller, Momo is skilled at creating experiences that engage users while driving revenue and profit. Momo's live video services encourage content creation, interaction, and gift giving between entertainers and fans, and Momo's emphasis on connecting people, dating, and romance is a hook that could keep the company's apps on people's phones alongside the bigger players.

When the bears come out, they cause fear and doubt. While the Wall Street analyst community is bullish about Momo's strong growth and future earnings, one short-seller raised some concerns that may worry investors.

Lack of transparency. It's easy for short-sellers to target Chinese firms for a lack of transparency. Doubts about shadowy subsidiaries, partnerships, and vendor relationships can read like a spy novel, with tangled webs of complicated business relationships. The company has faced accusations of obscured ownership and suspicious incentive programs concerning its talent agencies (who produce some of Momo's live video content) from a short-seller and its hired private investigators. Because Momo conducts its day-to-day business in Mandarin, it's not easy for U.S. investors to research these topics themselves.  While some investors avoid Chinese companies because of a lack of familiarity, many other individuals and companies have taken a leap of faith and have been investing in China for decades.

Threat of government interference. Bearish investors worry that any provocative content associated with Momo's social and live-streaming platforms could draw negative attention from the Chinese government.  Sanctions or even investigations into improper content could hurt Momo's business or its branding.

Fears of slowing demand. Perhaps the most significant bearish concern is that Momo's business might lose popularity or market share to other services. After nearly three years of rocket-like revenue and profit gains, a slowdown could come naturally. While bears suspect that Momo's recent purchase of online dating and networking site Tantan is a short-term means of boosting the numbers, Momo and its bullish investors view the acquisition as a long-term fit that cements its youthful audience.

Share price volatility. All Momo investors should be aware of the stock's volatility -- this could be a bumpy ride. Shares have nearly doubled in 2018 and the stock is priced for exceptional future growth. Any slowdown or difficulty with execution could hurt MOMO's share price, giving the bears the results they're looking for, and/or bulls an opportunity to build their positions.

So...is Momo a go, or a no-go? This profitable, high-growth Chinese social media company has a strong track record, a huge addressable market, and a unique way of connecting users, but investors should be prepared for volatility and risk if the company faces any difficulties.

Investors looking to profit from China's expanding mobile and social media marketplace should consider adding MOMO to their watch lists.