It's still really early for research from the collaboration between AbbVie and Alphabet's Calico, but the payoff could be huge.

One small step for two companies, one giant leap for mankind? That might be what we see in retrospect years from now.

AbbVie (ABBV -0.47%) and Calico, a life-sciences company funded by Alphabet (GOOG -1.29%) (GOOGL -1.34%), recently announced a three-year extension of their collaboration to develop therapies for age-related diseases, including cancer and neurodegenerative disorders. The two companies first teamed up in 2014.

These kinds of collaborations happen all the time in the biopharmaceutical world. There's no guarantee that anything significant will come from the AbbVie-Calico partnership. But I think investors should keep their eyes on what the two companies are doing. They just might turn healthcare upside down. 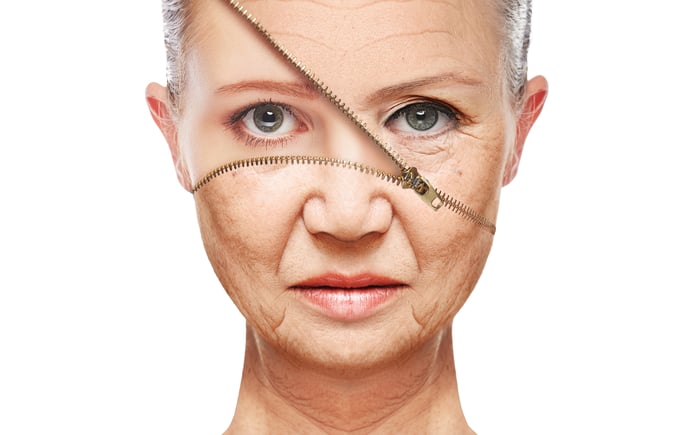 AbbVie and Alphabet working together might seem like the healthcare equivalent of the classic TV comedy "The Odd Couple." On the surface, at least, a pairing between one of the biggest drugmakers in the world with one of the largest technology companies in the world seems unusual.

A few years ago, however, Alphabet (which then was known as Google) decided to jump into the healthcare space head first. The company's Google X team had several projects focusing on healthcare-related initiatives. Its Google Ventures venture capital arm invested in quite a few healthcare companies. Some of those early initiatives led to the founding of Google Life Sciences, which was renamed as Verily in late 2015.

In 2013, though, Google announced that it was starting a new company, Calico, with a really ambitious goal to tackle aging and extend how long humans can live. Google brought Arthur Levinson aboard as the new company's CEO. Levinson led Genentech from 1995 until 2009, when the biotech was acquired by Roche. He also has served as the chairman of Apple's board of directors since 2011.

Nearly one year after its founding, Calico partnered with AbbVie in what Levinson called "a pivotal event for Calico." Each company ponied up $250 million to fund Calico's effort to establish a world-class research and development facility in the San Francisco Bay area.

What did AbbVie get out of the deal? The big drugmaker has the option to take over late-stage clinical development and commercialization of any therapies resulting from its collaboration with Calico.

What Calico is doing

The recent extension of the collaboration agreement for another three years indicates that both parties are happy with their working relationship so far. AbbVie's chief scientific officer, Michael Severino, said that the companies have "built a successful collaboration -- both scientifically and culturally." Arthur Levinson stated that Calico's collaboration with AbbVie "has fully met our high expectations."

But just what has Calico actually been doing? Few details are available. The press release issued by AbbVie and Calico about the extension stated that the collaboration "has produced more than two dozen early stage programs addressing disease states across oncology and neuroscience and yielded new insights into the biology of aging."

Calico now has more than 150 employees. Its research team includes some of the world's top experts in aging. For example, Cynthia Kenyon has been a pioneer in aging research for decades. Calico's head of research, Daniel Gottschling, is a prominent leader in researching the aging process.

The specific advances made by Calico's team have been largely kept under wraps so far. There is at least one intriguing finding that has been announced by the small biotech, though. Earlier this year, Calico scientists published findings from their research into the naked mole rat.

If you're not a fan of the naked mole rat, perhaps you should be. Calico's research discovered that the rodent defies laws of mortality. As animals age, their risk of death increases exponentially. That's not true for the naked mole rat, however. The creatures show little signs of aging, and their life-spans far exceed that of other rodents.

Calico's publications also point to significant research into the aging of C. elegans, more commonly known as the roundworm. The company's scientists found that specific genetic mutations in the worm that extend lifespan don't cause feebleness in old age as some researchers thought.

Just a small step -- for now

Why care about research into mole rats and roundworms? There's a possibility that Calico's understanding of aging in these animals could lead to breakthroughs in slowing down human aging.

Neither AbbVie nor Alphabet depends on Calico's success in its efforts. AbbVie claims the world's top-selling drug and the second-best drug pipeline in the biopharmaceutical industry. Alphabet ranks as the top search engine provider and is a leader in up-and-coming technologies including artificial intelligence, cloud computing, and self-driving cars. The investments in Calico and the collaboration thus far are merely drops in the bucket for both of these big companies.

But imagine what could happen if Calico does achieve its goal of cracking the code for aging and develops therapies that extend the human life-span. It could rival -- and likely even surpass -- the impact of man's first step on the moon.

The collaboration between Alphabet's Calico and AbbVie isn't a reason for investors to get excited yet. Small steps, though, can and sometimes do lead to giant leaps.

Got $3,000? 5 Unstoppable Stocks to Buy as the Market Corrects Lower