Starbucks' (NASDAQ:SBUX) recent announcement that it would eliminate plastic straws from its restaurants by 2020 elicited a collective shrug from Wall Street as the stock ticked up 2% on average volume on an up day for the market, but the decision could be an important catalyst for the coffee king at a time when it desperately needs one.

Starbucks shares recently sank to a three-year low after the company said in June it would close 150 underperforming U.S. stores this year, and cut its global same-store sales growth forecast to 1% for the current quarter. That news followed longtime chief Howard Schultz's decision to step down as chairman just months after he relinquished the CEO title to Kevin Johnson. The company is still trying to repair damage to its reputation from an embarrassing racial-bias episode in Philadelphia in April that led to calls for boycotts of the coffee chain. Starbucks responded by closing all its U.S. stores simultaneously for an afternoon of mandatory racial-bias education for all employees.

The plastic straw ban gives the company a chance to shift the discussion around its brand, and remind customers of its reputation as a progressive and environmentally conscious innovator. Starbucks said it will eliminate plastic straws by 2020 globally, replacing them with strawless lids or alternative-material straws in its 28,000 stores. This will eliminate more than 1 billion plastic straws per year, waste that often ends up polluting the oceans. 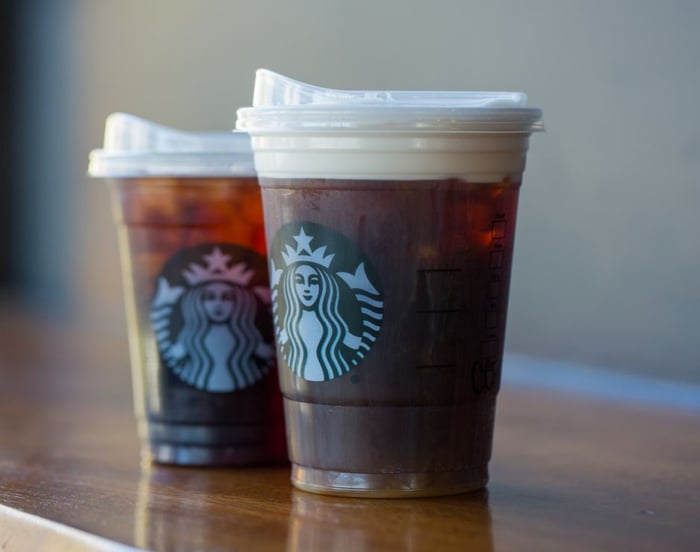 The move builds on the company's $10 million commitment to develop a fully recyclable and compostable coffee cup, along with other environmentally and socially mindful accomplishments such as serving 99% ethically sourced coffee.

With the announcement, Starbucks accomplished something it has struggled to do in recent months -- earn media praise. The New Republic hailed the decision as an "environmental milestone," with Starbucks being the first major restaurant chain to make such a move in response to growing concern about plastics pollution in oceans, and suggest it could prompt its peers to do the same.  Vox commended it as well, and many environmental groups, including Environment America and U.S. Public Interest Research Group, also lauded the plan.

In Starbucks' press release, Erin Simon, director of sustainability research at the World Wildlife Fund said, "Starbucks goal to eliminate plastic straws by 2020 from their stores globally represents the company's forward thinking in tackling the material waste challenge in totality."

Separating from the competition

Starbucks' shift on straws is also a demonstration of the cultural differences between it and close competitors such as McDonald's (NYSE:MCD) and Dunkin' Donuts (NASDAQ:DNKN). Both of those chains have some menu overlap with Starbucks, but the coffee siren distinguishes itself with its emphasis on ideas like being a welcoming "third place," and with its social and environmental conscience. For comparison, Dunkin' Donuts only recently said it would eliminate styrofoam cups by 2020. McDonald's has notably refused to look into banning plastic straws; CEO Steve Easterbrook recently said that there isn't any viable non-plastic alternative the company can use at the scale it needs.

A chain like Starbucks is ultimately only as strong as its brand. Of course, it needs to execute on a store level, and serve its customers like any other restaurant chain, but brand reputation and consumer perception are driven in large part by decisions like this one. Consumers tend to think about Starbucks differently than they do McDonald's or Dunkin', and such environmentally forward positions are a big reason why. For instance, Fortune magazine named Starbucks its third-most admired company in the world in 2017, and No. 1 in the food service industry.

As the recent announcements about planned store closures and weak comparable-sales growth shows, Starbucks has work to do on a number of fronts if it's going to bring its stock price out of the doldrums. The plastic straw ban, however, is a smart move that should help restore its reputation, and remind customers and investors alike of what separates the company from its peers.