It's been just weeks since AT&T's (NYSE:T) takeover of Time Warner was approved by a federal judge, but HBO -- Time Warner's prized premium cable network -- has already gotten its marching orders.

At a recent town hall meeting with HBO employees, AT&T executive John Stankey said the premium network needs to get bigger and more profitable. He presented a future where the company has significantly more subscribers, who spend many more hours with the network. According to a report in The New York Times, Stankey didn't mention Netflix (NASDAQ:NFLX) by name, but it was clear in his presentation that he had the streaming-video leader in mind.

Until recently, HBO routinely topped Netflix at award shows like the Emmys, yet Netflix long ago surpassed HBO in virtually every other meaningful category, including domestic subscribers, content, and market value. In the process, Netflix has made Time Warner's former chief, Jeff Bewkes -- who compared Netflix in 2010 to "the Albanian army" -- eat his words.

It's clear why Stankey would envy Netflix. The streaming champ now commands a market cap of $182 billion, more than double Time Warner's market cap when the deal closed. Netflix has tapped a disruptive technology -- streaming -- to build a global brand that seemingly can do no wrong in the eyes of Wall Street. It is adding millions of subscribers each quarter. As a result, it's now the most valuable entertainment company in the world, even though it has relatively slim profits.

HBO, by contrast, has been growing more slowly. However, it is considerably more profitable, generating $2.15 billion in operating income last year on $6.33 billion in revenue: enough for an impressive 34% operating margin. 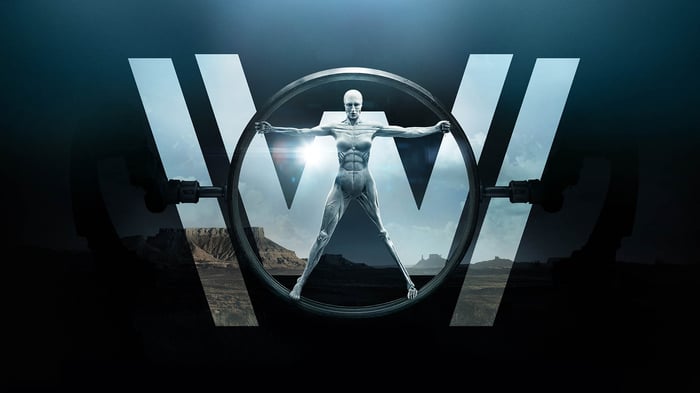 "Westworld" is one of HBO's many critically-acclaimed shows. Image source: HBO.

For years before the AT&T buyout, HBO's management had insisted that its network, which also oversees Cinemax, was fundamentally different from Netflix. While Netflix bombards its subscribers with thousands of titles that can sometimes be hard to sift through, HBO's content is carefully curated as the company only seeks to offer its subscribers top-quality shows and movies. While Netflix has garnered eye rolls for resurrecting shows like Full House with the sequel Fuller House, HBO consistently taps top talent to make award-winning shows like Big Little Lies, starring Reese Witherspoon, Nicole Kidman, and Laura Dern.

HBO has sought to use that distinction to appeal to talent. It argues that it can devote a level of attention to stars that Netflix can't, and that they would get lost in the shuffle at its streaming rival. Last year, HBO chief Richard Plepler summed up the company's position, saying: "More isn't better. Only better is better."

However, Stankey seems determined to tinker with that formula, telling HBO employees that the network must make more money, and that he plans to invest more in order to grow the premium cable channel.

HBO currently has an annual content budget of about $2 billion, compared to $7 billion to $8 billion at Netflix this year. However, at a time when HBO is competing with tech giants like Amazon and Apple, in addition to Netflix, Stankey is prepared to pour more money into content. He stated that HBO must "move beyond 35 to 40 percent penetration to have this become a much more common product."

With such a statement, Stankey clearly seems to have Netflix in mind, and he promised "stepped-up investment," though it was unclear how much. However, HBO is currently a premium product, unlike Netflix, which is geared toward the masses and offers something for everyone: even critically panned big-budget movies like Bright.

While it may be possible for HBO to retain its reputation for quality while accelerating its growth, it won't be easy to do both. The network already charges more than competitors for subscriptions ($15 a month compared to just $11 a month for the standard Netflix package). And as Plepler has said, part of HBO's appeal is its curation. It shows only quality programming. The network's reliance on linear TV also means that it can't stuff its content library in the same way that Netflix does, as it would eventually run out of time slots.

However, one thing is clear from Stankey's call. The arms race in streaming will only get more intense as HBO looks primed to build an arsenal to bid for blockbuster content alongside Netflix, Amazon, Apple, and Hulu. What that means for Netflix remains to be seen, as the streamer's growth has thus far been undisturbed by rivals' moves.

It's not surprising that AT&T wants to squeeze more out of its new cash cow, but making HBO into Netflix may be harder than Stankey thinks. HBO faces constraints, like time slots, that Netflix does not; the two companies have different cultures and DNA, and HBO now must please a new meddling corporate overlord.

AT&T's deep pockets could benefit the network, but messing with a formula that's brought in hundreds of Emmy awards could also prove misguided.