2018 has been a rough year for U.S. airlines. Fuel prices have been rising, and airfares haven't kept up thus far. As a result, the industry's pre-tax margin is on track to decline for a third consecutive year.

That said, Delta Air Lines (NYSE:DAL) is outperforming its peers. On Thursday, it reported solid second-quarter results. While the impact of higher fuel costs forced it to cut its full-year earnings per share forecast, Delta remains highly profitable and expects to return to margin expansion by the end of the year. Here are five key points about Delta's second-quarter performance and future trajectory that management highlighted on the company's recent earnings call.

1. Delta is recovering most of its fuel cost increases

We have seen early success in addressing the fuel cost increase and we did offset two-thirds of the $600 million impact from higher fuel in the June quarter. -- Delta Air Lines CEO Ed Bastian Management calculated that the carrier recouped about two-thirds of this cost headwind last quarter, as revenue per available seat mile (RASM) rose 4.6%. Delta expects a similar level of unit revenue growth in the third quarter, with RASM up 3.5% to 5.5% year over year. This should allow the company to make further progress toward stabilizing its profitability.

2. Corporate fares have room to rise

Improving corporate yields remains a significant opportunity and focus. While we are pleased with the June second quarter revenue results, as of June, we have only recovered 20% of the decline in domestic corporate fares since our peak in 2014. -- Delta Air Lines President Glen Hauenstein

Nevertheless, domestic corporate fares remain depressed by historical standards. Fares for last-minute domestic travel peaked in 2014 before plunging along with fuel prices. According to Delta, while these corporate fares have started rising again, they have only recovered 20% of the way to the prior highs. Management is working to drive further increases in corporate fares, seeing it as a big opportunity to keep unit revenue growing over the next couple of years.

3. International premium economy has been a huge success

Delta Premium Select expanded into the transatlantic during the quarter, and by 2021 all of our international widebodies will be equipped with this cabin, which is generating an average fare premium of over 100% to a standard coach seat. -- Hauenstein

Last year, Delta Air Lines began to roll out premium economy seating -- which it calls Premium Select -- on a portion of its long-haul fleet. Delta opted for larger premium economy sections than its rivals, but rather than installing them across its widebody fleet, it only committed to putting the Premium Select product on its longest-range planes. 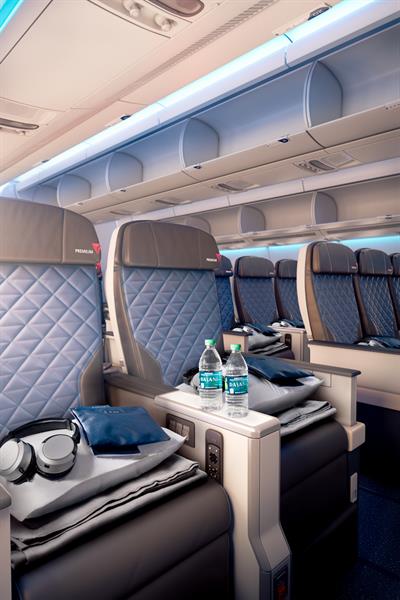 On Thursday, Delta revealed that the average fare in its Premium Select cabin is more than double that of a standard coach seat. That's great news, because while premium economy seats do take up more space than coach seats, they certainly don't use twice as much space.

Based on this strong demand for Delta's premium economy product, the carrier now plans to roll out Premium Select across its entire international widebody fleet by 2021. This will be another important RASM growth driver for the company going forward.

4. The Korean Air joint venture is off to a great start

We officially launched our joint venture with Korean Air in May, marking a very significant milestone for us in the Pacific. In the June quarter, we experienced double-digit unit revenue growth in Korea on a 24% increase in year-over-year capacity. -- Hauenstein

Over the past few years, Delta has made improving its profitability in Asia a key priority. The linchpin to its current strategy in Asia is a new joint venture with Korean Air.

A little over a year ago, Delta launched a nonstop flight from Atlanta to Seoul, connecting its largest hub to Korean Air's main hub. (It also flies to Seoul from Detroit and Seattle, while Korean Air flies to several U.S. cities.) The relatively new Atlanta-Seoul route helped drive a 24% increase in Delta's capacity to South Korea last quarter. But thanks to the launch of the joint venture in May, Delta still posted double-digit unit revenue growth in South Korea.

Looking forward, Delta plans to expand further in South Korea to take advantage of the joint venture. Next year, it will begin nonstop flights from its Minneapolis-St. Paul hub to Seoul.

5. The cost trajectory is about to inflect

Non-fuel unit costs were up 2.9% for the June quarter, a 1 point step-down from the March quarter. In the September quarter, we take a bigger step-down and expect our non-fuel CASM to be flat year over year, with the fourth quarter slightly better than that. -- Delta Air Lines CFO Paul Jacobson

While maintaining a strong unit revenue growth trajectory is important so that Delta can offset its rising fuel bill, it's also critical that the company hold down non-fuel unit costs. Adjusted non-fuel unit costs rose 4.3% in 2017, 3.9% in the first quarter, and 2.9% last quarter. Delta's management recognizes that this level of cost inflation is not acceptable.

Fortunately, Delta is about to start reaping the benefits of its fleet renewal program, as well as a $1 billion cost-cutting program. As a result, it expects non-fuel unit costs to be roughly flat on a year-over-year basis in the third quarter, and down in the fourth quarter. If the company can hit these cost targets, its goal of returning to pre-tax margin expansion by the end of the year seems very achievable.