We're still in the heart of summer, but the National Retail Federation is already looking ahead to parents' back-to-school shopping trips. However, based on the annual survey conducted by the NRF and Prosper Insights and Analytics, its members will be taking in a bit less this year than last: Total spending is forecast to come in at $82.8 billion, slightly below 2017's near-record of $83.6 billion.

Perhaps unsurprisingly, back-to-school spending will be highest among families with students in college or graduate school -- they'll lay out an average of $942.17. Families with children in elementary through high school plan to spend an average $684.79, down slightly from last year's $687.72.

"With the economy thriving thanks to tax reform and growing consumer confidence, we expect to see a very strong season," NRF President and CEO Matthew Shay said in a press release. "College spending is expected to be at its highest level ever, and back-to-school will be one of the three highest years on record. Whether shoppers buy now or wait until the last minute, retailers are ready with everything they need for a successful start of the school year." 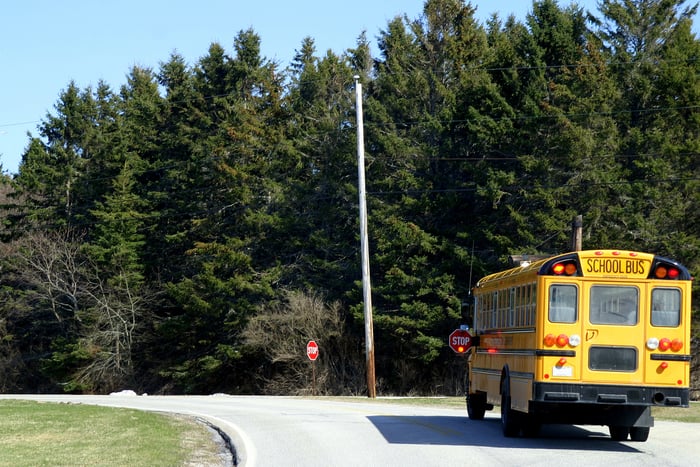 It may only be July but some are getting ready to go back to school. Image source: Getty Images.

"The biggest change we are seeing in back-to-school spending this year is coming from electronics," NRF Vice President for Research Mark Mathews said in the press release. "Items like laptops, tablets, and smartphones are now an everyday part of household life and aren't necessarily a purchase parents save for the start of the school year, resulting in the slight decrease in spending for this category."

Families with kids in college or grad school will follow a different pattern. Their spending is expected to be led by an average  $229.21 outlay on electronics. That will be followed by $153.32 on clothing and accessories, $109.29 on dorm or apartment furnishings, $102.82 on food, and $83.41 on shoes.

"College shoppers are prioritizing and increasing their spending budgets in essential categories including clothing, furnishings, and shoes," Mathews said. "However, categories such as personal care items, gift cards, and food saw a dip this year."

Where and when are people shopping?

Elementary and secondary-school parents generally planned to start shopping early -- 77% of them intend to hit the stores at least three weeks before school starts. That's more than the 67% of college shoppers who plan to do the same thing.

Back-to-school shopping, like any other type of signifcant spending, should be done with deliberation. Have a plan, and set a budget. Do your homework, and don't get too swept up by enthusiasm when you are in the store. For bigger items -- electronics specifically -- make sure you check prices at multiple retailers.

Since most people are starting early, that means they'll have time to comparison shop, and reconsider what their offspring really need. So take that time, get the best prices possible, and teach your child a lesson or two in prudence personal finance along the way.