Targa Resources (NYSE:TRGP) has been living on the edge. After paying out everything that came in last year to support its 7.1%-yielding dividend, the company has had to scramble to secure funding for its expansion projects. However, thanks to its creativity, the company has a multibillion-dollar expansion program underway. Combined with the fact that commodity prices are on the upswing, Targa's earnings should rocket higher in the coming years. Because of that, it has big-time upside that makes it worth a closer look.

Finally getting some breathing room

Last year, Targa Resources generated $1.14 billion in adjusted earnings before interest, taxes, depreciation, and amortization (EBITDA), which was about 7% higher than 2016. After expenses, the company produced $851.8 billion in distributable cash flow (DCF), nearly all of which it paid out to investors, leaving it with a razor-thin 1.0 times coverage ratio, well below the 1.2 times comfort level of most pipeline companies. 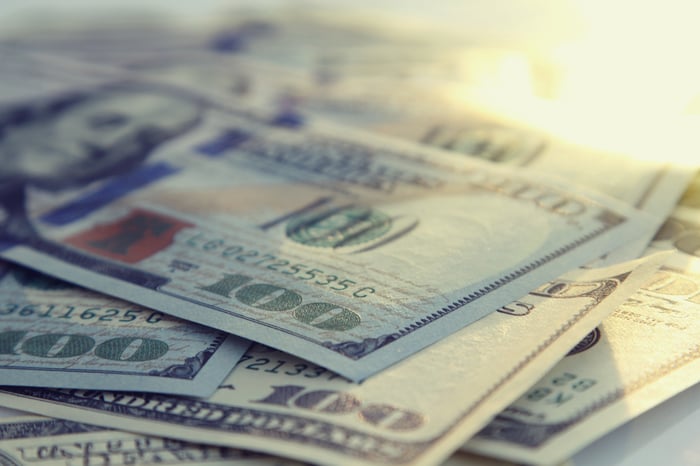 However, with oil prices improving, producers have ramped up drilling activities in 2018, resulting in higher volumes flowing across Targa's system. As a result, the company expects adjusted EBITDA to expand to a range of $1.225 billion-$1.325 billion in 2018 -- about a 12% increase from last year at the midpoint -- which should also boost DCF, giving it more breathing room to support its high-yielding payout.

While 2018 will mark a noticeable improvement in Targa's financial results, it's only the beginning. That's because Targa currently expects to invest nearly $2.2 billion into expansion projects this year, which position it for significant earnings growth over the next few years.

About 80% of Targa's investments are related to the fast-growing Permian Basin, where it's building several natural gas processing plants and gathering pipelines to support the growth of producers in the region. The company expects these projects to come on line in stages through the middle of 2020.

In addition, it has two major pipeline projects under construction. The Grand Prix NGL pipeline, which it's developing with two private equity partners, will move natural gas liquids (NGLs) from its processing plants in the Permian to a hub near the Gulf Coast. Meanwhile, the Gulf Coast Express (GCX) Pipeline, which Kinder Morgan (NYSE:KMI) is developing, will move natural gas from the Permian to coastal markets. Targa expects Grand Prix to start up by the middle of next year, while Kinder Morgan expects GCX to enter service by the end of 2019.

Targa also has a few projects outside the Permian worth mentioning. One of the largest is an extension of the Grand Prix pipeline into Oklahoma to support the fast-growing STACK Shale play. It's supporting this extension with third-party contracts as well as NGLs produced from a new gas processing plant it's building in the state through a joint venture with MPLX (NYSE:MPLX). Meanwhile, Targa also has some projects underway in the Bakken shale, including a joint venture with Hess Midstream Partners (NYSE:HESM) to build a new gas processing plant.

Targa Resources expects these projects to fuel needle-moving growth in the coming years. According to its forecast, EBITDA should rise to more than $1.5 billion by 2019 due to the expansion projects it expects to bring on line over the next year. Meanwhile, as volumes ramp on those and other projects, EBITDA could hit $2 billion by 2021, which is 75% above last year's level. What's noteworthy about that forecast is that it assumes the company's LPG export business doesn't earn any additional income above its current contractually supported level and that investment spending falls after the current wave of projects enter service, implying that there's upside potential to this forecast.

Targa Resources is more aggressive than most pipeline companies in that it currently pays out all its cash flow via its dividend, which is why it's relying on joint venture partners like Kinder Morgan, MPLX, and Hess Midstream to help fund its large slate of growth projects. This approach, however, could pay off big-time as those projects come on line since they have the company in the position to significantly expand earnings and cash flow in the comings years. That would not only provide security for Targa's high-yield payout, as well as potentially position the company to increase its dividend at a fast pace in the coming years, but could fuel big-time capital gains for investors. While certainly higher risk, Targa's reward potential makes it an interesting stock to watch in the coming years.