Rail freight giant CSX Corporation (NASDAQ:CSX) reported vigorous second-quarter earnings Tuesday after the markets closed, and its report was characterized by record operating efficiency metrics. The company is enjoying revived earnings and stock price momentum as a result of management's decision last year to do away with the railroad's hub-and-spoke rail plan, moving instead to a "scheduled railroad" model in which discipline, tight schedules, direct freight routes, and the optimization of assets are the foremost priorities. We'll scrutinize the variables that produced heightened results below, but first, let's take in the headline numbers. 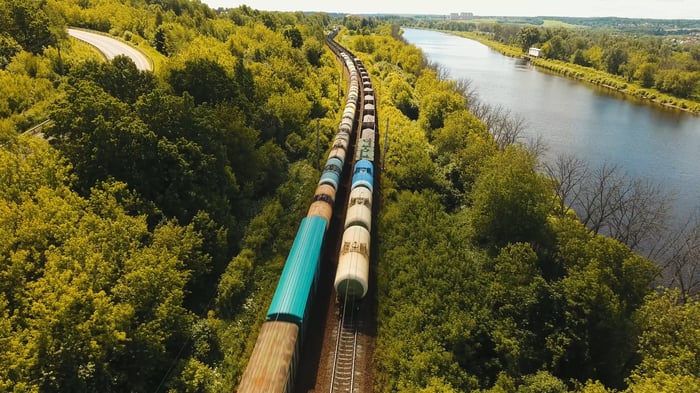 During the company's earnings conference call, analysts pointed out that the extreme shaving of operating ratio should create a competitive cost advantage, and they asked management if this would lead to sustained lower pricing to drive volume. CEO Foote provided a balanced answer that addressed both the advantage of sending efficiency gains to the bottom line and the need to be opportunistic at times given a growing cost advantage over competitors:

I believe that the operating ratio is a reflection of the efficiency of our service, which, in my mind, means that we continually improve the product that we offer to our customers. We are not working diligently to drive down the operating ratio so that we can be the price leader in the marketplace. So, I think, as I said last time, we don't get stickers and bonus points for volume. Therefore, to the extent that we can sell our product as a superior product in the marketplace, we fully intend to do that.

Clearly, we have as much flexibility as we want to if there are unique opportunities in the marketplace where a customer to us is not interested in quality of service, but is only interested in price. And if makes sense for us, being the low-cost provider, to pursue that business, we can do that too. So, we have all the flexibility in the world to pursue whatever business segments we want.

CSX doesn't issue detailed quarterly guidance, but management does provide a general outlook for the company's top line. Executives have raised the railroad's revenue target for 2018 from the low single-digits to mid-single-digit growth. This implies slightly faster expansion in the back half of 2018 versus the 3% revenue lift booked in the first two quarters of the year.