Whenever a company makes a large acquisition, investors should always look for the answers to a couple of questions. Can management squeeze out the operational savings it said it could? Did it pay a fair price?

Based on Lennar's (NYSE:LEN) (NYSE:LEN.B) most recent earnings report, the answers to those questions appear to be yes. Not only do the company's sales numbers look fantastic, but management already is taking the right steps to bring its finances back in order after the deal.

Here's a brief look at the company's most recent quarterly results and what investors can expect from here.

Before letting your jaw drop at these sales growth numbers, there are two things to keep in mind. One is that homebuilding is a seasonal business where sales are relatively weak in the first quarter. The other is that Lennar closed its acquisition of CalAtlantic in February, so this is the first quarter where we see the full extent of this acquisition.

The addition of CalAtlantic was the largest factor in Lennar's sales growth but it was also a reason why operating income was so weak. According to management, the integration of CalAtlantic's backlog and construction in progress related to an accounting charge that reduced net income by $236.8 million ($0.58 per diluted share), as well as some other corporate-integration costs. These charges help to explain why margins were so much weaker this past quarter. While management says that these charges are one time in nature, it will be worth following up in the coming quarters.

Aside from these things, though, Lennar's operating numbers were solid yet again. Deliveries were up 57%, and new orders outpaced deliveries to increase its backlog of homes by 114%, to $8.6 billion. 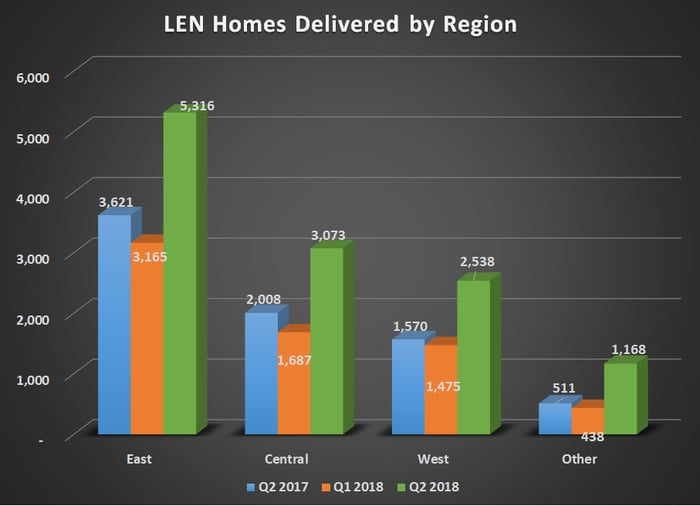 After management took on a hefty amount of debt to close the CalAtlantic deal, it's apparent that debt reduction is now one of its priorities. In the prior quarter, the company paid down about $1.1 billion in debt and increased its cash position to $932 million. At the end of the quarter, the company's net debt to capital was 40%. Surprisingly, that puts Lennar on the lower end of the range of most homebuilders.

The housing market has been in a boom for quite some time, which immediately makes people question how much longer it can last. According to executive chairman Stuart Miller, there are still a lot of factors working in Lennar's favor.

Concerns about rising interest rates and construction costs have been offset by low unemployment and increasing wages, combined with short supply based on years of underproduction of new homes. Demand remained strong as we continued to see pricing power support margins while affordability remained consistent.

Another thing that management noted was that the addition of CalAtlantic has helped the company significantly reduce its sales, general, and administrative (SG&A) costs, thanks to the increased scale of the business. According to CEO Rick Beckwitt, SG&A costs were just 8.7% of revenue, one of the lowest percentages in the company's history.

You can check out the full transcript of Lennar's most recent conference call here. 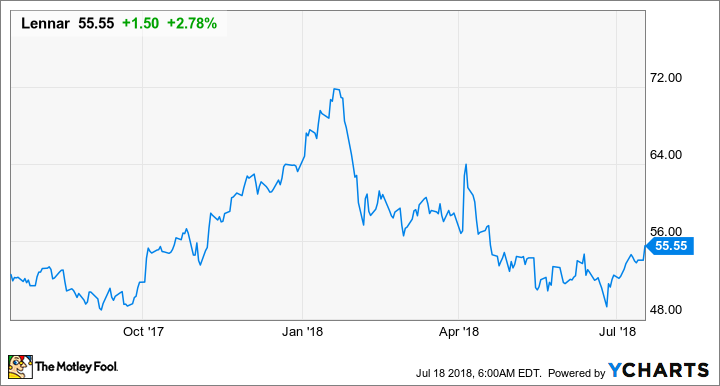 It's challenging to find any warts in this most recent earnings report. Higher sales, growing backlog, lower non-homebuilding expenses, and deleveraging are all good signs right now as the company digests this most recent acquisition. The one lingering question that remains is whether these one-time costs are indeed just that and not something that will come back to haunt Lennar down the road.

As it stands, there don't seem to be a lot of red flags that should have investors too concerned about the housing market slipping anytime soon. Inventories of homes for sale are still low and -- despite the near decade-long increase -- we're still only around the 40-year average for new housing starts in the U.S. This seems to suggest that Lennar has plenty of time to keep deleveraging and then hopefully to start returning more of this free cash flow generation toward shareholder returns.

Lennar's Aquisition Is Looking Like a Great Move After These Earnings @themotleyfool #stocks $LEN $LEN.B Next Article
Current