The weather is finally starting to cooperate for propane distributors Ferrellgas Partners, L.P. (OTC:FGP) and Suburban Propane Partners, L.P. (NYSE:SPH). That's a welcome relief for these limited partnerships, which were both forced to cut distributions amid a long streak of warm weather coupled with heavily leveraged balance sheets. With their top and bottom lines on the mend, however, which one of these high-yield partnerships is the better option for investors?

One key factor to remember about propane distributors like Ferrellgas and Suburban Propane is that they make most of their money from delivering propane, not selling it. So demand is a more important predictor of financial results than the price of propane, which largely gets passed through to customers. Suburban CEO Michael Stivala's review of the company's fiscal first half, which ended in March, summed up this winter heating season and the recent troubles the partnership has faced quite succinctly:

Now that we are through the first half of fiscal 2018, we experienced weather that was in line with that 10-year average, albeit 7% warmer than normal (based on average heating degree days over the prior 30 years), and our volumes responded accordingly. 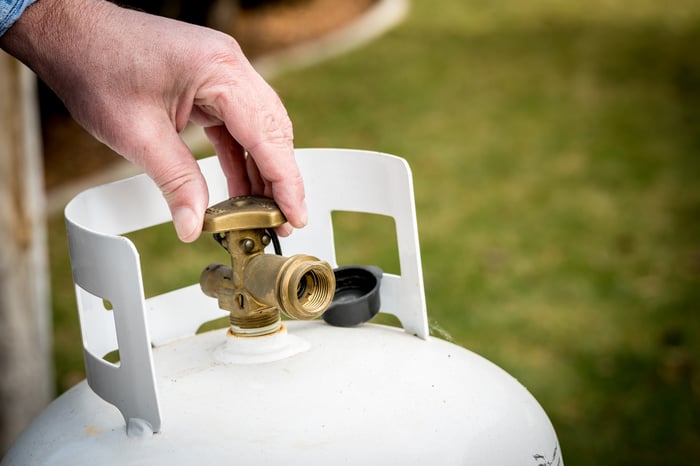 The 10-year average was higher than the 30-year average because recent years have been particularly warm. But with a relatively cold winter this year compared to the last few years, the propane distributor's volumes increased 8% year over year in the first half of fiscal 2018. Through the first nine months of the fiscal year, Ferrellgas sold 13% more propane year over year.

This is the big story behind the nearly 15% adjusted EBITDA increase at Suburban through the first half of its current fiscal year and the nearly 11% adjusted EBITDA increase through the first nine months of its fiscal year. However, there's something else interesting going on here. While Suburban's net income advanced 20% over this time, losses associated with asset sales pushed Ferrellgas' net income deep into the red year over year.

A rough patch that's not over yet

The big trouble spot for both of these partnerships is that they are struggling under the weight of heavy debt loads, the result of debt-fueled acquisitions. This high financial leverage led each of the partnerships to cut distributions in recent years. With more-normal weather starting to improve financial results, leverage is less of a concern, but it hasn't gone away. In fact, long-term debt levels for the two partnerships have remained roughly the same throughout their respective fiscal years. They aren't sitting still, per se -- Ferrellgas, for instance, has made some recent moves to shore up its balance sheet (including amending a credit facility) -- but neither partnership is making huge progress in reducing its overall indebtedness right now. 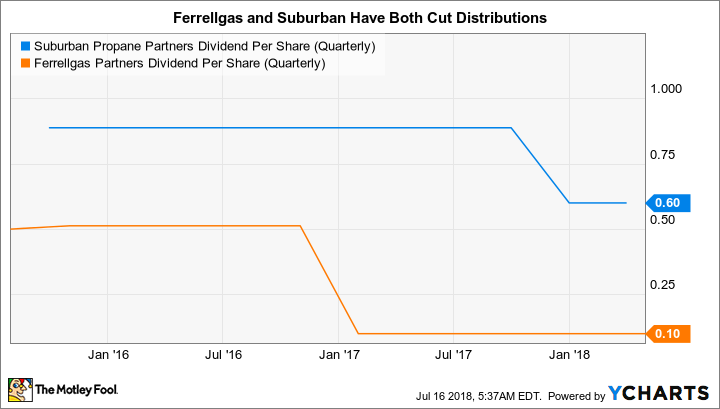 However, the reason for the debt is where the most important difference lies. Suburban levered up to expand its core propane business. Ferrellgas took on more debt to expand into the midstream oil and gas business, a move that proved ill-timed as oil prices started to plunge in mid-2014. That led to large write-offs of the newly acquired assets, pushing unitholder equity deep into negative territory. The midstream business is starting to stabilize as oil prices have recovered, but the net income drop was directly related to yet another write-off because Ferrellgas had to book a loss on the sale of a midstream-related business.

Simple is better if you are an aggressive investor

Suburban and Ferrellgas are struggling for broadly similar reasons, but Ferrellgas has a more complex problem to deal with because of its expansion into the midstream business. This is an added difficulty that most investors would be better off avoiding. There may be material turnaround potential, but it comes with a great deal of uncertainty. In contrast, Suburban just has to work on reshaping its balance sheet (while Ferrellgas has the daunting task of getting out from under a diversification effort that didn't work out as hoped). That makes it the better option of this pair, but only for aggressive investors who can stomach the leverage risk that has already forced a distribution cut.