What began with Disney's desire to expand internationally and increase its treasure trove of intellectual property descended into a corporate cat fight. As a result, Disney is now set to pay $20 billion more for Fox than it originally intended to spend. 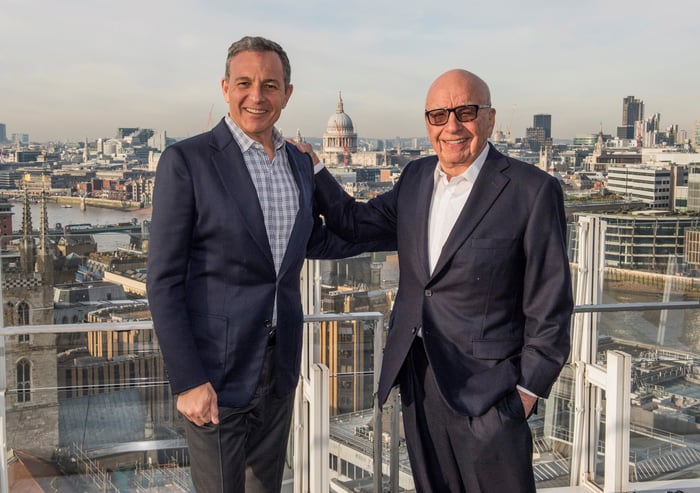 Disney announced in December its intention to acquire a number of media assets from Fox for $52.4 billion. In a drama fit for prime time, Comcast decided to rain on Disney's parade by announcing its own $65 billion offer for Fox, with Disney countering at $71.3 billion. While some people expected Comcast to continue the bidding war, the price may simply have been too high. Another potential factor may have been the recent decision by the Department of Justice to appeal AT&T's acquisition of Time Warner. This may have convinced Comcast that the regulatory environment wouldn't work in its favor, causing the company to withdraw its bid.

Comcast has instead decided to focus its energy and financial assets on a battle it believes it can win: The acquisition of the 61% of European pay-TV operator Sky that isn't already owned by Fox.

For its part, Fox will separate its Fox Broadcasting network and stations, Fox News, and Fox Business Network -- as well as sports channels FS1, FS2, and the Big Ten Network -- into a new public company that will be spun off to Fox shareholders.

Disney will acquire several Fox cable assets in the deal, including the National Geographic and FX networks, while also gaining control over a number of Marvel characters under Fox's purview, including Deadpool, X-Men, and the Fantastic Four. The company will also get the Fox TV and film studios, which own hit television shows like The Simpsons, Modern Family, and This Is Us, and blockbuster movie properties such as Avatar.

Additionally, Disney will get a boost to its streaming ambitions by acquiring Fox's 30% stake in Hulu, increasing Disney's ownership to 60%. Another important component of the deal is Star India, which would benefit Disney on several fronts. Star owns 60 cable channels that boast 700 million monthly viewers, as well as two streaming services that serve an additional 150 million subscribers. All told, Star reaches 90% of all homes in India.

Lastly, Disney will acquire the 39% of Sky that Fox already owns. Sky has 23 million pay-TV subscribers across Europe, as well as an international content production and distribution network.

Disney has already received approval from the U.S. Department of Justice to proceed with its acquisition of Fox, with the sole stipulation being that Disney will have to sell off Fox's 22 regional sports networks. The company still needs to complete any remaining international regulatory hurdles, and should receive the necessary shareholder approval later this month.

The one remaining question is whether Disney will continue its pursuit of the other 61% of Sky. The company hasn't revealed its intentions, but in a filing with the SEC last week, Disney said that Fox "may elect not to increase the price offered by it in the Sky acquisition and any increase in the debt financing for the Sky acquisition would require Disney's consent, which Disney may elect not to provide."

Disney could also decide to sell Fox's stake in Sky, in order to reduce the overall cost of the deal. Now, we'll just have to wait and see how that remaining skirmish plays out.