You probably know by now that Canada is on course to allow the adult use of marijuana for recreational purposes in October. And you probably know that many project that the market will be big -- with some estimating first-year sales of CA$5 billion and perhaps even more.

What some might not realize, however, is that one potentially massive marijuana market won't be open for business in Canada this year. But this market should be on the path to legalization in 2019, with companies such as Canopy Growth (NASDAQ:CGC) champing at the bit. 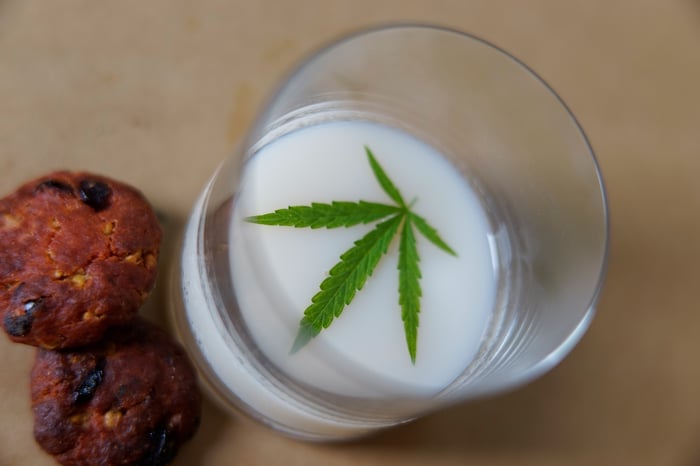 Hold off the munchies and vapes

Canada will allow legal use of marijuana in several forms beginning on Oct. 17. These forms include dried cannabis, cannabis oil, and cannabis seeds. Notably absent from the list of what will be permitted, however, are cannabis edibles and cannabis concentrates.

The regulations for Canada's adult-use cannabis market established by Health Canada, the country's federal department overseeing public health matters, specifically left out edibles and concentrates used for vaping. Why? The agency felt that more time was needed "for the development of specific regulations to address the unique risks posed by these product classes."

Health Canada's thinking was that several aspects of cannabis edibles and concentrates required special regulations. Quality control, THC limits, portion sizes, and packaging/labeling were examples of areas where the department determined that edibles and concentrates were sufficiently different from dried cannabis, cannabis oil, and cannabis seeds to require more thought on regulatory requirements.

However, Health Canada did set a timetable for how much time should be allotted to finalizing these unique regulations. The agency expects to be ready for the legal sale of cannabis edibles and concentrates within one year of implementation of the Cannabis Act, also known as bill C-45. That means yet another legal marijuana market in Canada should be on the way in 2019.

How big could the Canadian market for cannabis edibles and concentrates be? Judging from what's happened in the U.S. so far, pretty big.

BDS Analytics surveyed adults in these four U.S. states that have legalized recreational marijuana. The market research firm found that of the roughly one in four respondents who don't currently use cannabis but would consider doing so in the future, many stated that cannabis edibles would be the product they would be most likely to first try.

The opportunities in these two categories of marijuana product could be enormous. BDS Analytics thinks that cannabis edibles could offer "perhaps the highest financial returns of any cannabis sector." Concentrates, especially those used for vaping, have been the fastest-growing marijuana product category.

Canopy Growth CEO Bruce Linton definitely has his eyes on the potentially lucrative edibles market. Linton said in a recent CNBC interview that Canopy expected to launch an assortment of new products, with a focus on cannabis-infused beverages such as zero-calorie drinks with mixtures of cannabinoids.

Selling these kinds of products makes perfect sense for Canopy Growth. In October 2017, giant alcoholic beverage maker Constellation Brands (NYSE:STZ), perhaps best known for distributing Corona beer, bought a 9.9% stake in Canopy. The two companies also stated at the time that they planned to work together to develop cannabis-infused beverages.

Other Canadian marijuana growers could also jump into the fray. Last month, BNN Bloomberg reported that Molson Coors (NYSE:TAP) was in discussions with several Canadian companies, including Aurora Cannabis (NASDAQ:ACB) and Aphria (NASDAQOTH: APHQF), about collaborating on cannabis-infused beverages. The report also indicated that Molson Coors was potentially interested in investing in a Canadian marijuana grower, as Constellation Brands did.

So far in the U.S., cannabis-infused beverages have only been a small component of overall cannabis edibles sales. However, it could be a much different story in Canada beginning next year with key marijuana growers in the country teamed up with large beverage companies. And if the U.S. relaxes federal laws related to marijuana, the opportunity in the U.S. should be even greater.

The bottom line is that there's a lot of money to be made in peripheral categories of marijuana. But for Canadian marijuana businesses, the profits will have to wait a little while.