It's been a fabulous year so far for Amazon.com (NASDAQ:AMZN). While the S&P 500 has gained less than 4% in 2018, Amazon shares have skyrocketed 50%, driven by its growing dominance in the realm of e-commerce and strength in the company's industry-leading cloud computing business.

Investors will be looking closely at the numbers when Amazon reports the financial results of its 2018 second quarter on Thursday, July 26, after the market close. Let's revisit Amazon's performance last quarter and review the metrics to watch when the company releases its earnings. In the first quarter, Amazon reported sales of $51 billion, up an incredible 39% year over year, excluding a favorable impact from foreign exchange rates. This exceeded both the high end of the company's forecast and analysts' expectations. Net income growth was even more impressive, up 125% compared to the prior-year quarter.

One of the highlights of the quarter was the stunning growth of Amazon Web Services (AWS), the company's cloud computing operation, which grew 49% year over year, generating more than 10% of Amazon's total revenue and 74% of its operating income.

A few things to watch

Amazon's top line is ruled by its e-commerce revenue, so investors will be watching that growth closely. In the first quarter, online sales in North America and international markets grew 46% and 34% year over year, respectively. Watch those growth rates for signs that customers are continuing to flock to its e-commerce platform.

AWS has been Amazon's crown jewel, and adoption of the cloud computing platform has been accelerating. While investors shouldn't expect 50% year-over-year growth indefinitely, there haven't been any indications that it will be slowing measurably any time soon. Watch for any significant drop-off, as competition from other providers is increasing. Amazon has historically been able to maintain its share, even as the overall market for cloud computing services has continued to grow, and I suspect that will continue.

Finally, Amazon will be reporting its financial results shortly after the conclusion of its fourth annual Prime Day, which kicked off at 3 p.m. EDT on July 16 and ran for 36 hours. In previous years, Amazon has shared some of the highlights of the event when it reports earnings, and I expect that will be the case this year. 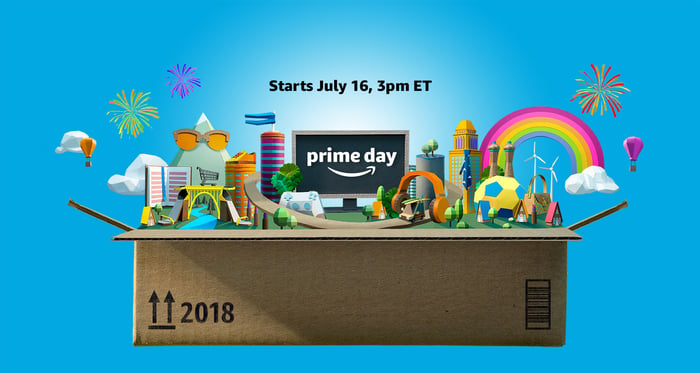 For the just-completed second quarter, Amazon forecast net sales in a range between $51 billion and $54 billion, which would represent 38% year over year growth at the midpoint, and include $1.2 billion in expected benefits from the favorable impact of foreign exchange rates. The company expects operating income in a range of $1.1 billion to $1.9 billion, an exceedingly wide scope. It represents impressive growth of 75% to 202% compared to the prior-year quarter.

Analysts are also expecting significant growth. Consensus estimates are calling for revenue of $53.44 billion, or about 40% higher than the year-ago quarter. Earnings estimates are similarly robust, with expectations of $2.54 per share, up more than 500% year over year, but that requires some context.

As I pointed out last year, Amazon made several strategic investments during its 2017 second quarter, including an increase in its fulfillment and logistics capability, as well as additional content for its Prime Video library. These moves are in line with Amazon's longstanding preference to make long-term bets and not sweat the quarter-to-quarter results.

Now, a year later, shares have gained more than 75%, investors are cheering, and last year's earnings miss is nothing more than a faded memory.

It's important to keep in mind that while Amazon is focused solely on the long term, investors can be more circumspect in their thinking. Amazon has a particularly high valuation, recently 220 times trailing earnings, and carries a forward multiple of 138. Any sign of weakness -- any at all -- and fair-weather investors may run for the exits, in a repeat of last year's behavior.

Amazon has been prescient in its ability to plan for the future, and I don't see any reason for that to change.