This dividend stock is cashing in on one of the most lucrative opportunities in North America's ongoing energy boom. And no, it's not the Permian Basin.

OK, OK. The shale basin spilling over the West Texas border and into southeastern New Mexico is arguably the most important energy-producing region in the world, and the Permian Basin is expected to account for half of America's crude oil production growth in the next five years. But it's not the only region energy investors should focus on.

That's because, for reasons that can be chalked up to either geology or Uncle Sam hitting the geographic jackpot, the United States is also home to the Marcellus shale in the Northeast. According to the U.S. Geological Survey, the region holds over 84 trillion cubic feet of natural gas, roughly a quarter of the nation's total. Combine it with the Utica Shale (located underneath the Marcellus) and the Appalachian basin accounts for 41% of all tight gas produced in the country.

Remarkably, most of the region's output has come on line in the last five years, but it'll grow by an even larger amount in the next five years. Few companies are better positioned to capitalize than Antero Midstream Partners ( AM -1.96% ), which is poised to nearly double its distribution -- currently yielding 4.7% -- by 2021. Here's how the energy stock could become a gold mine for income investors. 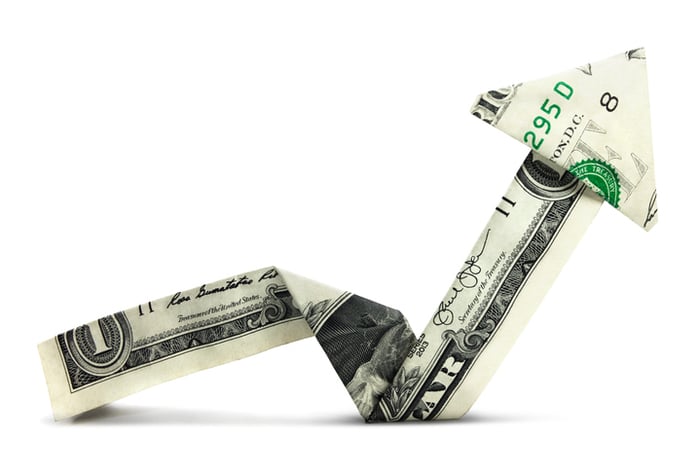 Antero Midstream Partners is, as the name implies, a midstream operator in the oil and gas industry. It's a relatively young stock, having only gone public in 2014. The business focuses almost exclusively on gathering, compressing, and processing natural gas output from its parent company, Antero Resources (NYSE: AMGP). However, it has also expanded midstream operations to include freshwater delivery, and now boasts the Appalachian region's largest water delivery network and the world's largest wastewater treatment facility for oil and gas operations. Not bad considering it didn't even have a water segment in 2014.

While water is important (and expected to deliver one-third of adjusted EBITDA this year), the primary growth driver for Antero Midstream Partners is the region itself. According to the U.S. Energy Information Administration, the Marcellus and Utica shale basins grew natural gas production from just 7.8 billion cubic feet per day (Bcf/d) in 2012 to over 23.8 Bcf/d in 2017. That's an increase of 16 Bcf/d -- a volume that, if the region were a stand-alone country, would rank third in global output.

That's incredible enough, but the industry expects the Appalachian region to grow natural gas output even faster in the next five years. By 2022 the region could increase its production by another 17 Bcf/d. It presents an almost too-good-to-be-true growth opportunity for Antero Midstream Partners, which fully exploited the growth of the last half-decade. 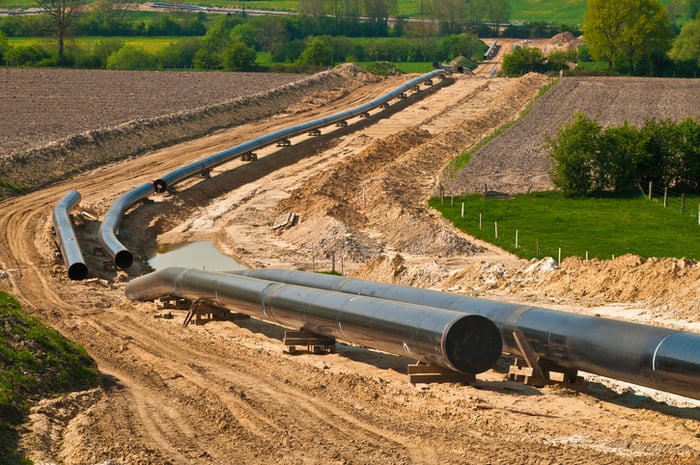 In 2014 the midstream operator generated just $66 million in adjusted EBITDA. Full-year 2018 guidance calls for $730 million, which would represent a compound annual growth rate (CAGR) of 82%. Antero Midstream Partners has plenty more statistics along those lines. Since its IPO, gathering volumes have increased at a CAGR of 49%, compression volumes at 126% per year, and gas processing at 140% per year. Oh, and the business delivers 221,000 barrels per day of water.

As investors would expect, that growth allowed the natural gas middleman to grow its distributable cash flow 1,032% since its IPO. The distribution per unit has jumped from $0.68 in 2014 to $1.72 today (at the midpoint of full-year 2018 guidance), and the business has 1.3x coverage -- more than enough to be called sustainable. And that's only the beginning.

Antero Midstream Partners expects its investments in growth projects to come at just 4.3 times EBITDA in 2018 (and were 4.4 times and 4.5 times in the previous two years). That compares to 8x to 12x multiples for most other master limited partnerships. Simply put, the metric demonstrates that the midstream operator isn't overpaying for growth and is expertly managing its balance sheet. That's backed up by the fact it boasts an unbelievably low debt to EBITDA ratio of 2.3 -- whereas most peers are at 4.0 or higher -- which provides ample financial flexibility to continue investing in growth for the long haul.

Profitable growth will pay huge benefits for unitholders. After completing growth projects across its network aimed at helping its parent company do its part to boost Appalachian natural gas output by 17 Bcf/d in the next five years, Antero Midstream Partners expects to deliver $4.10 per unit to investors in 2022. If the business delivers on its five-year target, then unitholders who buy the stock today would enjoy a distribution yield of 12.9% in 2022.

If that's not the definition of a gold mine, then I don't know what is. 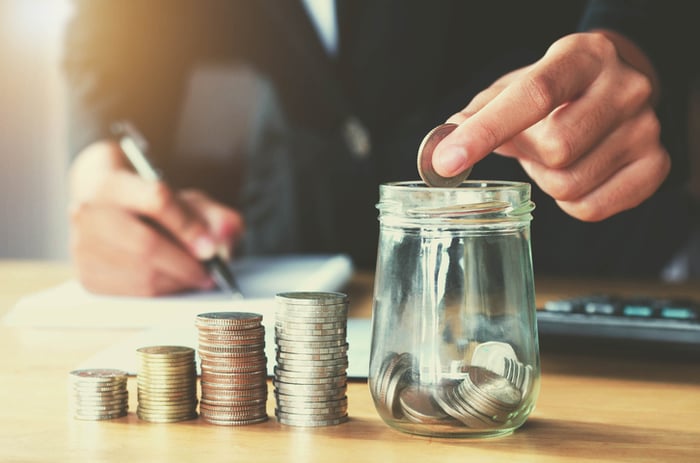 Antero Midstream Partners is poised to become a top income stock for investors and retirees thanks to its unique position in the Appalachian region. The incredible growth of natural gas production in the last five years has provided ample opportunity for growth, and the business hasn't missed a beat. That bodes well for the company's ability to replicate its past success in the next five years, with an even greater volume of gas production expected to be added through 2022. Considering the region is expected to at least maintain that level of production for the foreseeable future, and that the company's parent is sitting on a treasure trove of liquids-rich land that's waiting to be tapped, this midstream operator could have decades of income to deliver to unitholders.