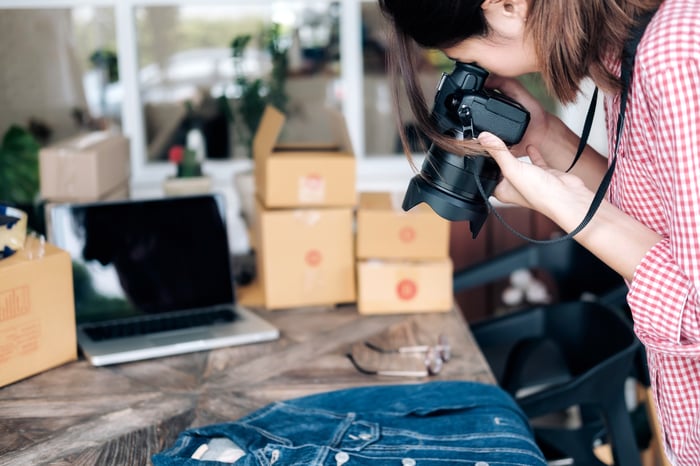 Each of the three companies is benefiting from global transaction growth in the payments industry. On a point of clarification, Visa and Mastercard are credit card networks (also referred to as interchange associations), while First Data is most broadly defined as a merchant "acquirer." A merchant acquirer provides technology and devices for merchants to process credit and debit card payments. It also interacts with a credit card network during a transaction, verifying funds availability and performing fraud procedures and, ultimately, forwarding authorization to a customer's acquiring (card-issuing) bank for the completion of the payment process.

Both credit card networks and merchant acquirers attract investor attention during periods of rising payments transaction volume. According to a report released in October 2017 by consulting firm McKinsey & Company, the global payments industry is projected to grow at a compounded annual growth rate, or CAGR, of 7% through the year 2021.

While this represents brisk expansion, Visa, Mastercard, and First Data have each recently outpaced the industry benchmark. Let's look at each company's most recently reported quarter (all three have periods endings March 31, 2018). Visa's revenue advanced 13% to $5.1 billion, which the company attributed to three key drivers: payments volume growth of 11%, an increase in processed transactions of 12%, and cross-border volume growth of 11%. Mastercard's revenue jumped 29.5% in its most recent quarter, after adjusting for 2.5 percentage points in acquired revenue -- an impressive top-line result. The company cited a 17% increase in switched transactions (authorization, clearing, and settlement processes), a 21% bump in cross-border volume, and a global gross volume growth of 13%.

First Data doesn't typically provide volume growth figures. However, the corporation's 11% revenue increase during its most recent quarter was paced by higher transaction flow in North America, Latin America, and Europe, through its GBS (Global Business Solutions) segment, which focuses on merchant transactions.

Drilling a bit deeper, climbing transaction growth within emerging markets also links the three organizations within the context of industry growth. This is manifest in Visa's and Mastercard's healthy cross-border volume growth. It's also evident upon a closer read of First Data's GBS segment: The Latin America and Asia-Pacific regions within GBS achieved revenue expansion of 38% and 20%, respectively, last quarter.

If a rising tide of transactions defines opportunity, the rapid evolution of the payments industry represents a threat for all three organizations. Specific worries include the rise of non-network payments companies like PayPal (NASDAQ:PYPL) and Square. In addition, the creation of non-card network, phone-based payments systems in the developing world also poses a market share challenge. M-Pesa, the world's largest mobile-to-mobile payment system, is widespread in Africa, and it's expanding within Asia as well. And we shouldn't forget blockchain technology, which is a longer-term potential danger, as fledgling digital currencies vie for widespread acceptance.

All three companies are actively dealing with the transformation of the payments space. Both Visa and Mastercard support using EMVco standards to introduce a simplified, unified online checkout process for online and mobile payments. EMVco is an international consortium formed by Visa, Mastercard, and other card networks to globally standardize secure payments through the specifications and test processes it originates. In April, Visa introduced its "Visa Digital Commerce" program, which is based on an EMVco framework and allows for the elimination of passwords across devices. The company plans to move its 350,000 merchants and 33 million customers currently enrolled in the Visa Checkout program to the Visa Digital Commerce platform by the end of 2018.

To date, Visa, Mastercard, and First Data have taken advantage of favorable industry conditions in credible fashion, while insulating themselves from competitive threats. Looking forward to the balance of 2018, investors will soon have more data points to consider: Each company is slated to report its latest quarter by the end of July.