It might be hard to believe, given the dearth of for-profit after-school tutoring programs in the United States, but this niche is big business in China. Witness the continued ascendance of New Oriental Education (NYSE:EDU). The company initially focused on English-language tests for college-ready Chinese students, but has since pivoted to K-12 tutoring.

The company's fiscal fourth-quarter results released this week showed more of the same: huge revenue and enrollment gains along with a focus on building more learning centers across China. 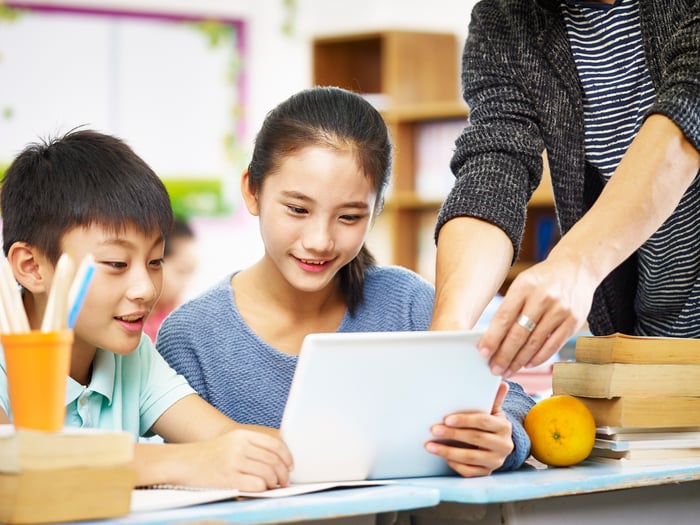 Before diving into specifics, let's look at how New Oriental performed on the headline-grabbing metrics.

Any investor would be happy with revenue growth as heady as New Oriental's. But some skepticism wouldn't be out of order, either, since earnings aren't growing nearly as fast as sales.

On that front, however, there's a very reasonable explanation. As CEO Chenggang Zhou said in prepared remarks:

During the quarter, we added a net total of 81 learning centers in 37 existing cities. For fiscal year 2018, we added a total of 226 new facilities, including 200 new learning centers in existing cities, 11 offline training facilities in three new cities, 14 dual-teacher model facilities in six low-tier cities, and one kindergarten in Hong Kong. Altogether, our total square meters of classroom area by the end of fiscal 2018 increased by approximately 40% year-over-year.

Put simply: New Oriental sees an opportunity to take market share and lock students into its ecosystem. But it needs to act fast as it has more than a few competitors in China. New Oriental's advantages are its superior brand recognition and accessible pricing. While expanding square footage by 40% in one year is a huge investment, it broadens the long-term opportunity considerably.

Building schools and staffing them completely -- while waiting a few months for them to come to capacity -- has short-term consequences. That's why the cost of revenue and selling and marketing both grew faster than sales, 50% and 52%, respectively. New Oriental's management thinks the long-term payoff will be more than worth it.

By far the most important metric for investors to follow is enrollment. On this front, results were very encouraging: Total students were up 45% to almost 2.1 million. The K-12 tutoring programs continue to be the strongest driver of growth. Importantly, both enrollment and revenue for this segment were up 52%. I say "importantly" because the equal growth levels show something important: New Oriental didn't have to offer deep discounts to win over these students.

That enrollment strength also showed up in a 47% increase in deferred revenue. This accounts for money the company has already collected but not yet recognized, for future classes throughout the year. As a result, New Oriental ended its fiscal year with $3 billion in cash and investments and no long-term debt -- an enviable position to be in. The company also generated $560 million in free cash flow despite all the capital investments.

For the first fiscal quarter of 2019 -- which tends to be the slowest for New Oriental -- management expects revenue in the range of $830 million to $850 million. If it hits this range, it will have achieved growth of 26% to 29%.