Semiconductor giant Intel (NASDAQ:INTC) posted an earnings report on Thursday evening covering its second-quarter 2018 results. The chip titan beat Wall Street's expectations across the board, raised its full-year guidance targets, and yet saw share prices plummet on the news.

Don't worry, it will all make sense in a minute. Here's what's going on with Intel today.

Intel's second quarter by the numbers

Elsewhere in the financial figures, Intel's free cash flows rose 49% year over year to $2.88 billion. The company spent all of that and more on $3.89 billion in share repurchases during the quarter and another $1.4 billion in dividend payouts. That's a 184% direct return of incoming cash to shareholders.

The big bottom-line jump included a large one-time tax charge in 2017 related to the sale of Intel's security division, formerly known as McAfee. Together with December's broad tax system changes and a small one-time tax benefit in the reported period, Intel's effective tax rate fell to 9.5%. In the year-ago report, the GAAP tax rate stood at 38.6%.

The client computing group posted predictably slower growth as the PC continues its decades-long slide into obsolescence ("I'm not dead yet!"), but this division remains Intel's largest contributor on both the top and bottom lines.

Smaller divisions showed uniformly strong growth in the mid-20s percentage range, though their profit contributions are small and, in some cases -- I'm looking at you, nonvolatile memory solutions -- negative.

What's next for Intel?

Looking ahead, CFO Bob Swan stated that Intel is poised to deliver solid results for the long term.

"We are uniquely positioned to capitalize on the need to process, store and move data, which has never been more pervasive or more valuable," Swan said in a prepared statement. "Intel is now competing for a $260 billion market opportunity, and our second quarter results show that we're winning." Swan repeated these claims on the earnings call with financial analysts, doubling down on the breathtaking potential size of a more fully explored data analysis market. "90% of the digital data ever created was generated in just the past two years," Swan said. "But of that data, only 1% has been analyzed, indicating massive untapped potential."

Finally, Intel boosted its full-year revenue guidance by $2 billion or 3%, now centered around $69.5 billion. The GAAP earnings target for 2018 increased by 8% to approximately $4.10 per share. 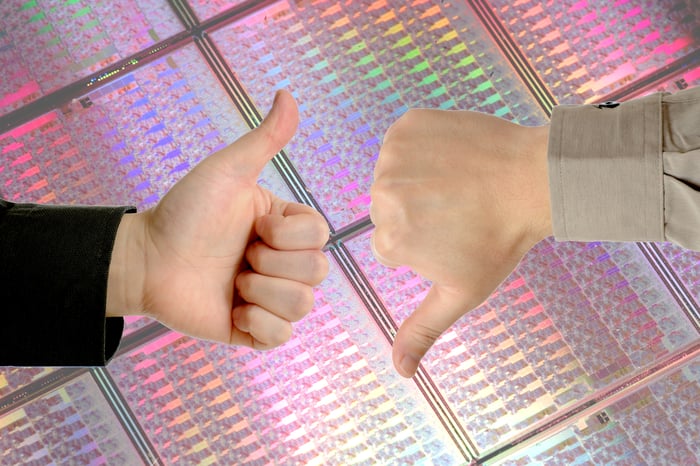 Thumbs up or down for Intel? Today, it's a little bit of both. Image source: Getty Images.

"Beat and raise," so what's up with today's price drop?

Your average analyst was looking for adjusted second-quarter earnings near $0.96 per share on something like $16.8 billion in top-line revenue. Intel exceeded both of these targets with $1.04 of non-GAAP earnings per share and the aforementioned $17 billion in sales. And we just talked about management's boosted full-year targets.

Yet, stock prices plunged as much as 8.7% lower on Friday morning. What's going on here?

For starters, Intel's shares were priced for something very close to perfection and the company didn't exactly blow Wall Street away. We shareholders have enjoyed a 50% return over the last 52 weeks, and that's including today's sharp cutbacks. A quick correction might have been in order here.

Furthermore, the report could have been better. Investors prefer to see free cash flows coming in above the taxable operating profit and after-tax net income metrics, and Intel got that backwards this time. That's not unheard of but fairly unusual in Intel's recent history. Analysts and investors alike don't want it to become a habit.

And that's not all. The move to a more efficient 10-nanometer chip manufacturing platform is now "on track" to put 10nm systems on store shelves in the second half of 2019. Intel started shipping "low volumes" of 10nm chips in the first quarter so the technology exists -- we're looking at a slow ramp-up of production yields that could leave Intel vulnerable to faster-moving manufacturing specialists. Archrival Advanced Micro Devices (NASDAQ:AMD) has already demonstrated a 7nm solution together with Taiwan Semiconductor Manufacturing (NYSE:TSM) and its former in-house foundry, GlobalFoundries, with resulting product launches to follow later this year.

This is the scary part of Intel's second-quarter report. The company can't afford to fall behind by a generation and a half in the never-ending race toward smaller chip traces. A better manufacturing platform comes with many benefits, from reduced costs per chip to lower cooling requirements and electric power draws. Leaving a gap here could flip the script and make Intel the underdog to AMD in key markets like data center servers and top-shelf gaming systems.

The upshot: Keep an eye on Intel's drama

Intel must step up its execution in order to stay on top of the semiconductor heap, which is a tall order while also unexpectedly searching for a new CEO and facing apparent manufacturing yield issues. That being said, it's a doable mission and those rising share prices have still only pulled Intel's valuation up to 15 times trailing earnings. I'll keep a close eye on the 10nm situation because things are getting hairy out there, but I have no plans to sell my Intel shares until further notice.

Add Intel to your Foolish scorecard to stay on top of the situation. We'll keep you posted.