It might not show up in the most recent earnings report, but Precision Drilling's (NYSE:PDS) operations are making strides in the right direction. Revenue and net income for the land rig owner remain stubbornly stagnant, but the underlying operating metrics continue to head in the right direction. For investors, seeing these operational improvements has to get one's hopes up that the company will turn to net income gains sooner rather than later.

So let's take a look at Precision's most recent results to see why its headline numbers aren't budging even though drilling activity continues to increase, and try to gauge whether the company will reap the rewards of this favorable market soon.

The reported numbers for Precision this past quarter don't paint a great picture. Even though drilling activity in the U.S. is on the rise, the company's revenue declined sequentially. The reason is that Precision has a large presence in Canada, where drilling is much more seasonal. The second quarter is typically a low point in Canadian drilling activity because of restrictions for moving heavy equipment on roads, so to see a decline between this quarter and the prior one isn't surprising.

Despite the decline in Canada, Precision's U.S. operations continue to grow quickly as the company's fleet of high-specification rigs is taking market share. Total active rigs in the U.S. were up 22% compared to this time last year. Much of these gains are offset by higher operating costs related to upgrading its fleet to meet drillers' demands, though, so this increased activity isn't translating to the company's bottom line.

Another encouraging sign that doesn't show up in these numbers: The company is generating excess cash from operations, which it's using to pay down some debt. Precision's management was able to retire $75 million in debt outstanding with cash from operations. At the end of the quarter, the company's debt-to-capital ratio stood at 50%, which is on the high end of the range for land rig owners. 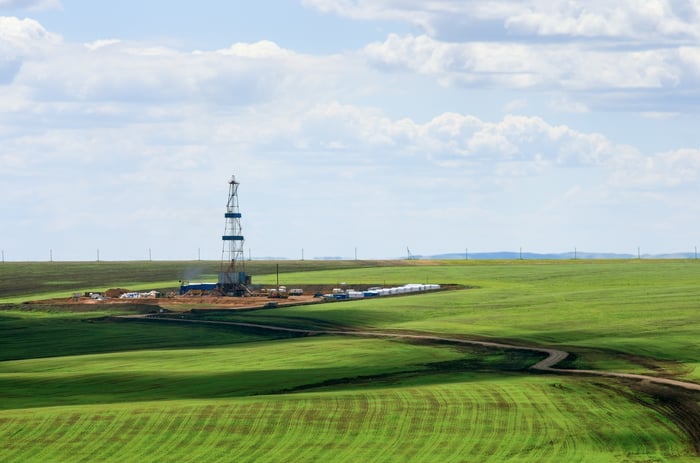 Reflecting the progress that the company's operating metrics showed, CEO Kevin Neveu's press release statement was very optimistic for the rest of the year in both the U.S. and Canada:

I am pleased to report both day rates and margins per day increased nearly US$1,200 quarter-over-quarter with no increase in daily operating costs. I expect to see continued increases in our average rates and margins throughout the second half of the year with continued strength in pricing, further value capture from our technology initiatives and continued fixed cost leverage. In Canada, Precision's activity levels increased 7% year-over-year outperforming the 3% increase in industry drilling days. In addition, day rates excluding shortfall revenue increased approximately $1,400 per day year-over-year largely as a result of improved spot pricing. Since our last earnings announcement Precision signed ten term contracts in the U.S. and two term contracts in Canada, which coupled with our activity increase and improved day rates, is a clear indication of continued customer alignment with our High Performance, High Value service offering. 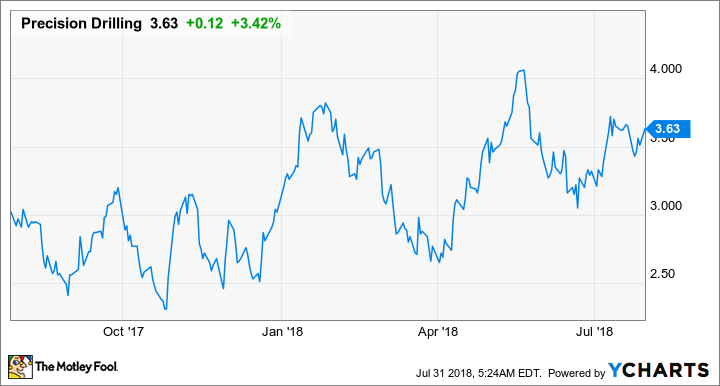 Precision Drilling's second-quarter income statement was the equivalent of a shoulder shrug. Even though there were some impressive operational gains with its uptick in U.S. active rig count, the company's bottom line continues to get dragged down with high costs and interest payments on its rather onerous debt load. Management intends to pay down CA$300 million to CA$500 million in debt over the next three to four years, and the CA$75 million it was able to pay down this past quarter was a good sign that it can achieve that goal in relatively short order.

The market for land rigs in the U.S. and Canada is working in Precision's favor, and it's very encouraging to see the company take market share in the U.S. where its results will be much less affected by the seasonal drilling schedule in Canada. That said, the high costs associated with upgrading or constructing rigs and interest payments on its oversize debt load are going to eat into margins for some time, and investors may not see the benefits of the improving rig market for some time in Precision's stock.