The Mac maker still has growth levers to pull.

Apple's (AAPL 4.08%) strong fiscal third-quarter earnings release last night has propelled shares to all-time highs, allowing the Mac maker's total market cap to flirt with the $1 trillion threshold. For what it's worth, the magic per-share price that marks that point is $207.04, based on the number of shares outstanding that Apple reported in its 10-Q. iPhone X pricing drove the majority of growth during the quarter, although the company's execution in its services business was also a meaningful contributor.

The best part for investors is that there's more growth in store.

Growth has been accelerating

Apple's guidance for the fiscal fourth quarter calls for revenue in the range of $60 billion to $62 billion. Gross margin should be in the range of 38% to 38.5%, with operating expenses of $7.95 billion to $8.05 billion. At the midpoint of that top-line forecast, revenue should grow at a healthy 16%. What we don't know is whether or not the outlook includes the 2018 iPhone launch, which could take place in September, or if Apple intends to grow by pulling the same levers that it's been tugging on for the past three quarters.

As Apple races Amazon.com to a $1 trillion valuation, one noticeable difference between the two tech giants is revenue growth. The e-commerce company has been growing at a much faster rate, albeit off a relatively smaller revenue base. Apple's guidance is particularly encouraging when you consider the fact that it would represent the fifth consecutive quarter of double-digit growth, following some malaise in 2016, the year that Apple posted its first-ever decline in iPhone unit sales. Since then, Apple has flexed its pricing power muscles to compensate for slowing unit growth.

Better yet, it's worked: Revenue growth has been steadily accelerating since the beginning of 2017. 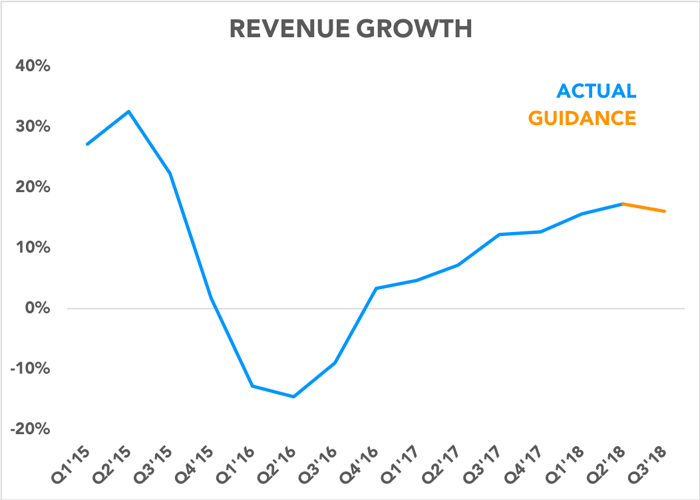 In terms of the gross margin guidance, profitability should be about flat heading into the September quarter. Typically, Apple enjoys seasonal operating leverage during that period as sales rise sequentially, but CFO Luca Maestri noted that "product transition costs" will weigh on gross margin next quarter. On top of that, foreign exchange headwinds are expected to adversely impact gross margin by about 30 basis points due to the strengthening U.S. dollar, according to Maestri.

Longer term, profitability should be bolstered by Apple's growing services business, which now represents 14% of total revenue on a trailing-12-month (TTM) basis. That segment is highly profitable, and also includes quite a bit of recurring revenue in the form of paid subscriptions -- both first-party services offered by Apple as well as third-party subscriptions.

The company now has 300 million paid subscriptions being processed through its platforms, and Apple is reportedly working on a premium news service while evidence mounts that it is also building a video-streaming service. Even though Apple's TTM revenue base is now over $250 billion, the company still isn't done growing quite yet.