No, it won't use offshore drilling rigs to mine cryptocurrencies.

We're at the point in the offshore rig industry's downturn where I've lost count of the number of quarters in a row that Diamond Offshore (DO) has posted declining revenues. The company's management had been riding out the slump remarkably well by managing costs, but this past quarter, its costs outstripped its revenue, and it delivered an operating loss.

Despite this bad news, there were several positive indicators in the company's fleet status report that suggest the days of falling revenue are numbered. Furthermore, management announced plans to get into the world of blockchain, but not in the way that most others have done before.

Let's take a look at Diamond Offshore's most recent results to see what's going on behind the income statement, and consider whether this investment in blockchain could be a needle-mover for the company.

The income statement for Diamond isn't exactly the most impressive thing lately. Some of its peers have begun to see upticks in revenue from contracted rigs, but Diamond's revenue continues to slip, and its operating income finally fell to a loss this past quarter. These results don't tell the whole story, though, because there are some parts of the company's fleet status report that should give investors hope.

Over the past few months, Diamond Offshore has been able to secure some long-term contracts for its newest and most capable drillships. Three of them now have contracts in place that extend past 2021, with options for additional years. Further, about 28% of Diamond's fleet has contracts in place that extend past 2020, which is the best contract coverage among its peers. However, some of those rigs are either being reactivated, are in transit, or are currently under construction, so they aren't delivering revenue today. They will, though, which should put a halt to Diamond's revenue skid. 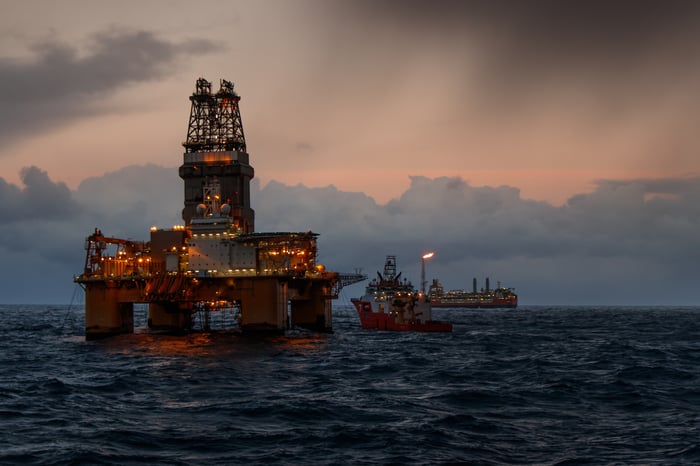 During this downturn, Diamond Offshore has been more willing to try new things to make its offerings more compelling to producers. Back in 2016, it introduced a new business model with what is now Baker Hughes, a GE Company under which it leases critical equipment such as blow out preventers from the equipment manufacturer. The goal was to better align the manufacturer's interests with the needs of its customers, and to lower their downtime costs.

This past quarter, Diamond started another new program to further reduce customer costs: blockchain! Yes, the same technology behind cryptocurrencies is coming to the offshore drilling business. Here's CEO Marc Edwards on the company's conference call explaining how it will apply blockchain to its business.

Blockchain technology shines when there are multiple parties to a single longitudinal transaction, which in offshore drilling is the manufacture of a well. The technology will provide an immutable platform for the optimization of well construction activities including drilling-related services, material and the supply chain, both offshore and shore-based.

By enabling automated actions and removing the lag associated with updating currently available databases, Blockchain has the ability to make the exchange of goods and services associated with the manufacture of a well quicker, more efficient, more reliable and more automated.

For more information about the most recent quarter, you can check out a full transcript of Diamond's conference call here. 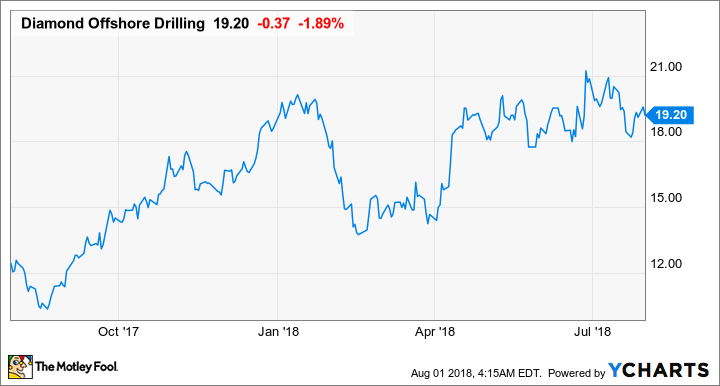 Not great right now, but positioned to succeed

Diamond's still-sinking revenue numbers aren't that encouraging, but the good news is that it looks like those declines will end soon, given that it's activating an idle rig and bringing a newbuild rig into service by 2020. That might sound like a long ways away, but it's less than 18 months from now.

There's no certainty that Diamond's blockchain endeavors will pan out in terms of gains on the bottom line, but over the past few years, the company has put together a pretty decent track record of implementing revolutionary ideas in the offshore market. So, for now, my view is that investors should remain hopeful that Blockchain Drilling Service can truly deliver results for the company, and that it's not just a gimmick.

With robust contract coverage in place and a couple rigs still idle, Diamond looks relatively well positioned over the next few years. It also has the financial flexibility to make an acquisition if it wants to, and there are still quite a few distressed assets out there. The company's stock is priced at a slight premium to its peers because its contract coverage gives it much more certainty about revenues in the short term.