After an earnings beat, Royal Caribbean gets rewarded on Wall Street.

A little over a month after downbeat guidance from Carnival Corporation (NYSE: CCL) sank Carnival stock -- and those of Norwegian Cruise Line Holdings and Royal Caribbean Cruises as well -- one of them is doing a whole lot better this week.

Which of the three cruise ship operators was it? I'll give you a hint: It was the one that reported earnings Thursday morning. Here's what you need to know. 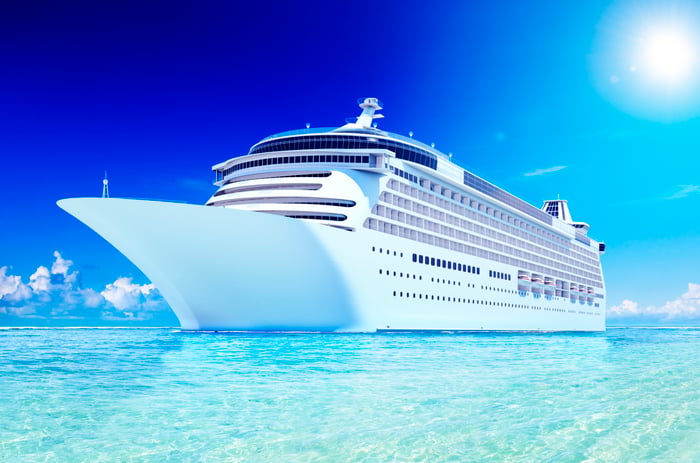 Royal Caribbean reported its fiscal Q2 2018 financials yesterday morning. Earnings of $2.19 per share beat Wall Street estimates with a stick. Analysts had predicted the company would earn only $1.97 per share, and those estimates were only for pro forma earnings. Royal Caribbean's earnings were of the real, honest-to-goodness GAAP variety.

The company's $2.34 billion in quarterly revenue likewise edged out estimates.

In commenting on the report, Royal Caribbean CEO Richard Fain said he was "frustrated by foreign exchange and fuel rates" that added costs to his business, but "we are tickled pink that our business continues to excel and overcome these headwinds."

Sales climbed 6.5% year over year in Q2, while total cruise operating expenses rose only 4.5%. Marketing costs jumped 10% as Royal Caribbean spent heavily to spur revenue growth -- but at least the effort paid off. Also, marketing represents a relatively small percentage of Royal Caribbean's total revenue. While it bears watching going forward, it wasn't enough to derail the quarter this time.

And what about next time? Royal Caribbean ended up growing its GAAP profit a whopping 28% year over year in Q2. The company also issued new guidance for the current quarter and full-year 2018. Royal Caribbean told investors to expect it will earn between $3.90 and $3.95 per share, pro forma, in Q3, which appears to mean growth of 13% year over year.

While it would have been nice to see Royal Caribbean follow up its great GAAP earnings with similarly reliable GAAP guidance for the quarters to come, the company's GAAP numbers weren't really all that far off from its pro forma profit report in Q2. Assuming this holds true for the balance of the year as well, it looks like Royal Caribbean stock is selling for about 12.9 times this year's projected earnings.

That's not at all a high price to pay for a stock that just turned in 28% profit growth, that's promising 17% growth this year, and that Wall Street analysts believe will be capable of growing earnings at a near-14% annual rate over the next five years.

And it's not just me saying that, either. This morning, analysts at British banker Barclays Capital announced they're upgrading Royal Caribbean shares to overweight and assigning this $114 stock a $145 price target, which implies a 27% profit over the next 12 months. Barclays thinks Royal Caribbean's Q2 results were "strong," says StreetInsider.com (subscription required). TheFly.com adds that Barclays sees a "significant disparity" between what Royal Caribbean stock sells for today, and what it's actually worth.

If I could inject just one note of caution into this discussion, though, it would be this:

While Royal Caribbean's sales growth is fair, and its earnings growth phenomenal, I do not like that the company's free cash flow suffered a steep fall in the first quarter, when it ran negative to the tune of $796 million. Q2 results showed a quick snap back to positive free cash flow. Still, trailing-12-month results now show Royal Caribbean generating just $641 million in cash profits against reported earnings of more than $1.7 billion -- a rather huge disparity.

If free cash flow continues to improve as the year goes along, it could still be smooth sailing for Royal Caribbean and its shareholders. If not, however, well...all I'm saying is to keep your eye on the horizon. You might still want to disembark at the next port of call if the FCF number takes another turn for the worse.