Please ensure Javascript is enabled for purposes of website accessibility
Log In Help Join The Motley Fool
Free Article Join Over 1 Million Premium Members And Get More In-Depth Stock Guidance and Research
By George Budwell - Aug 3, 2018 at 5:00AM

Vascepa's all-important cardiovascular-outcomes trial is less than two month's away from a top-line readout.

Amarin Corporation (AMRN -3.52%) is a small-cap biotech that has the potential to score life-changing gains for investors -- perhaps within the next 60 days. In brief, Amarin is less than two months away from unveiling the top-line results for the cardiovascular outcomes study known as Reduce-It. The goal of this five-year-long clinical trial is to evaluate the ability of Amarin's highly refined fish oil pill Vascepa to lower the rates of serious cardiovascular events, like heart attack or stroke, when used in conjunction with statins.

What's all the fuss about? Vascepa is presently approved by the Food and Drug Administration (FDA) as a treatment for patients with exceptionally high triglyceride levels -- a relatively small market estimated at about 4 million people in the United States at present. If Reduce-It is an outright success, however, the FDA may agree to broaden Vascepa's label to include patients who are still having trouble controlling their triglyceride levels, even after taking statins. This broader label would expand Vascepa's addressable market to upwards of 75 million people in just the United States, according to EvaluatePharma. 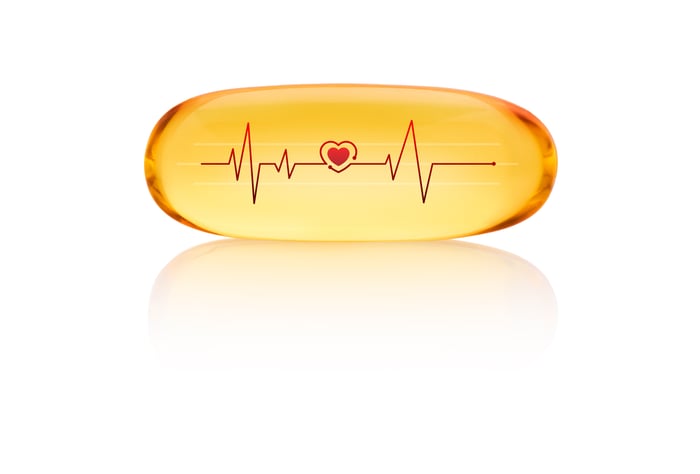 With this background in mind, I think it's worth taking a deeper look at both the bull and bear cases for this speculative biotech stock, ahead of this pivotal data readout. Read on to find out more.

If Reduce-It's results translate into a broader label, Vascepa's sales are projected to rise at an astonishing compound annual growth rate of 23.7% over the next six years. Amarin's share price thus would be in line to gain more than 200% from current levels, at a bare minimum. Some Wall Street analysts, after all, have a much more optimistic take on Amarin's upside potential if Reduce-It is an unequivocal success. And that's just the biotech's near-term value proposition.

Shareholders with a truly long-term outlook could be in for an enormous windfall. Vascepa, after all, is forecast to achieve peak sales of $1.9 billion within the next decade. Amarin's growing free cash flows in the years ahead would thus open up several avenues in terms of business development that should translate into even more value for long-term shareholders.

The key point is that Amarin could realistically generate returns on capital exceeding 500% over the next decade. Not many stocks can offer that kind of market-crushing performance, which is arguably why this particular equity is worth checking out right now.

All that being said, the market doesn't seem to think Reduce-It will produce the type of clear-cut win necessary for an easy jaunt to a broader label. Amarin's shares, for instance, have fallen by nearly 40% from their 52-week highs heading into this all-important data release.

Specifically, Vascepa is composed solely of eicosapentaenoic acid (EPA), whereas other omega3 supplements contain a mixture of EPA and docosahexanoic acid (DHA). The big deal is that EPA reportedly does not raise LDL or bad cholesterol levels. The same can't be said for DHA, however. As such, Amarin's argument is that Vascepa should have a better chance at providing a demonstrable cardiovascular benefit than its predecessors because the pill is essentially pure EPA.

Is Amarin correct about its pure EPA hypothesis? Unfortunately, there's no way to predict this forthcoming data readout with any confidence whatsoever. There are no published studies in the record that provide a true apples-to-apples comparison to Reduce-It. And that's the underlying problem.

If you invest in Amarin's stock right now, you are, without question, flying blind into this make-or-break data readout. And that's arguably a rather compelling reason to remain safely on the sideline with this speculative biotech.

The good news is that Amarin probably won't turn out to be an all-or-nothing type play at the end of the day. Vascepa's sales momentum may slow if Reduce-It is a wash, but the drug still should be able to continue generating respectable sales as a treatment for severely elevated triglyceride levels.

With this notion in mind, I think aggressive investors might want to consider opening a smallish position in this small-cap biotech right now. Amarin's sizable upside, after all, seems to outweigh its downside risk heading into this binary event.