Please ensure Javascript is enabled for purposes of website accessibility
Log In Help Join The Motley Fool
Free Article Join Over 1 Million Premium Members And Get More In-Depth Stock Guidance and Research
By Rich Duprey - Aug 3, 2018 at 8:07AM

The chain has its own burger battles to attend to without getting mixed up in the pizza wars.

Papa John's International (PZZA 3.57%) was reportedly willing to sell itself, and Wendy's (WEN 1.45%) might have been interested in buying, until comments deemed racially insensitive by the pizzeria's founder John Schnatter led to his resignation as company chairman -- and caused the burger joint to back away from further negotiations.

As the perennial second-place finisher behind Domino's Pizza (DPZ 2.90%) in the three-way pizza wars with Yum! Brands' (YUM 1.71%) Pizza Hut, there is some sense in Papa John's seeking out a buyer. What's not so clear is why Wendy's would want to buy a pizza joint that's been stumbling badly -- even before this most recent incident. 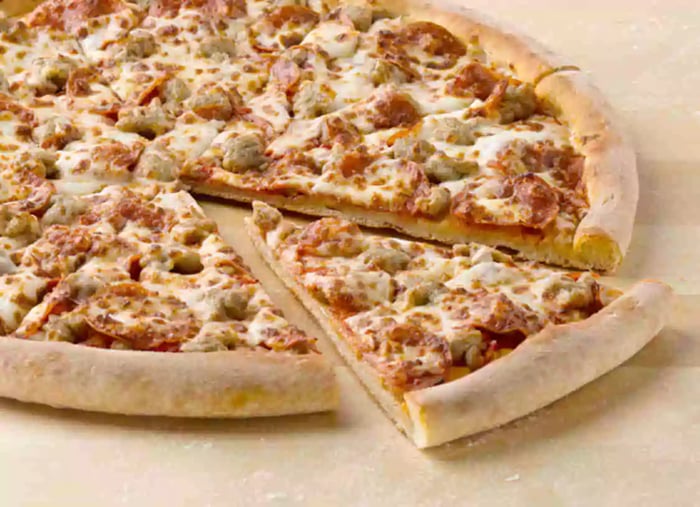 Wendy's was rumored to be interested in a slice of Papa John's pizza business. Image source: Papa John's International.

Embroiled in its own burger battle, Wendy's has been on a tear. It has compiled an impressive 21-consecutive-quarter run of higher comparable sales, outpacing by almost 2-to-1 rival McDonald's (NYSE: MCD) comp streak. Though both chains have struggled at times to see greater customer traffic numbers, Wendy's has been able to continuously drive restaurant volumes higher, hitting a record $1.6 million in average unit sales in North America in 2017.

Shares of the burger restaurant have increased by more than 126% over the last five years, compared to a 66% gain in the S&P 500 index and a 26% rise in Papa John's stock: 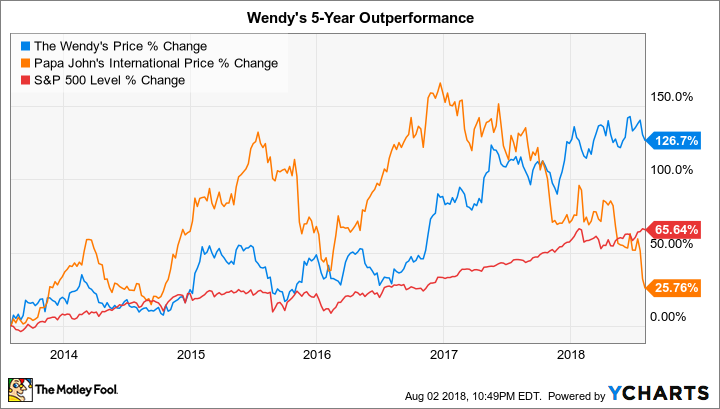 There doesn't seem to be much to gain in going the pizza route, particularly after Wendy's other attempts at diversification -- a private-equity pairing with roast beef sandwich outlet Arby's, and an ill-fated acquisition of Tex-Mex chain Baja Fresh didn't pan out well. It had better luck with Canadian coffee specialist Tim Hortons, which it eventually spun off, but pizza is a whole new gig.

Although the potential pizza foray does promise the potential of greater international market exposure, as Papa John's operates in 45 countries and has a third of its 5,200 restaurants located in foreign markets, Wendy's has begun growing out its own global footprint. New restaurant openings in other countries accounted for 44% of all new Wendy's stores opened last year.

Too much on its plate

That doesn't mean every chain should jump into non-core concepts, as Wendy's own spotty record attests. Further, Papa John's has posted three straight quarters of disappointing earnings that would require the burger shop to go from growth mode into a turnaround mindset to fix the pizzeria's problems.

Papa John's sales have slowed considerably over the past year and a half, a decline that Schnatter had controversially attributed in part to protests occurring in the National Football League at the time. The pizza joint, which had been the official sponsor of the NFL since 2010, ended its affiliation with the league earlier this year. Pizza Hut is now the NFL's official pizza chain.

With Schnatter out of company operations altogether (he still owns 30% of its stock, however, making him the company's largest shareholder), it's possible Papa John's can make a U-turn away from the controversies that plagued it with its founder at the helm.

Already the chain has begun eliminating Schnatter from its marketing and branding -- he was literally the face of the company -- and Papa John's recently announced it was adopting a poison pill defense to prevent Schnatter from regaining control of the company. But Domino's remains the dominant national quick-serve pizza chain, and Pizza Hut may finally be starting to turn around its own operations as Yum! Brands spends $130 million to fix its problems.

Wendy's doesn't need to be involved in these pizza battles as its own burger business still needs attending to. McDonald's and Burger King continue to be potent competitors, and distracting itself with an acquisition of a troubled Papa John's will only cause Wendy's to fall short at what it does best.